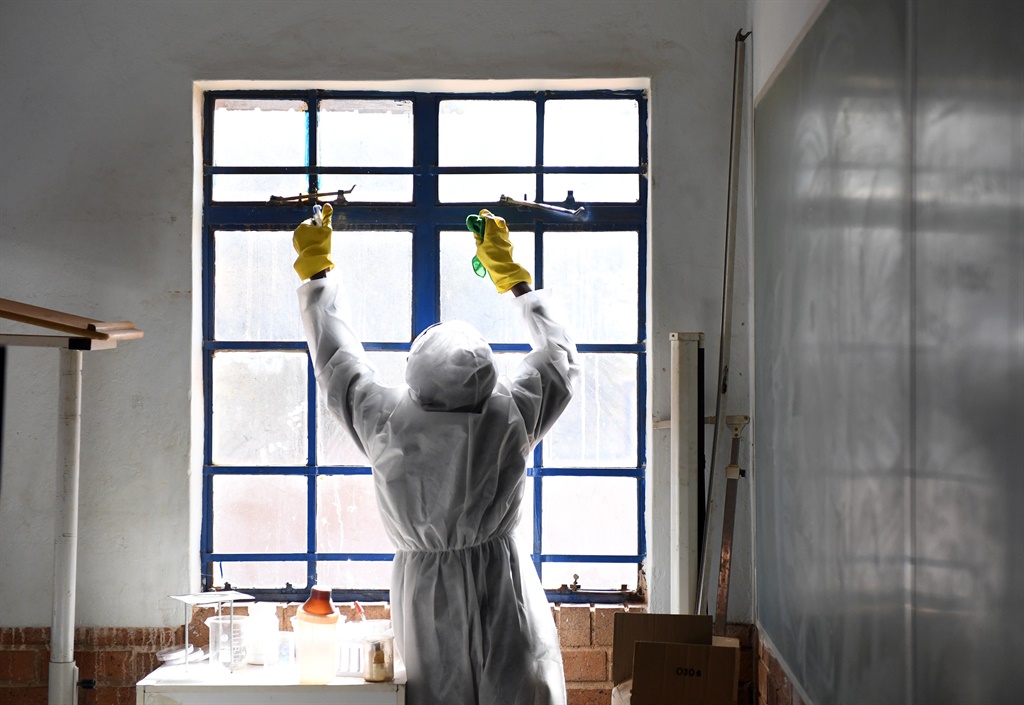 Disinfecting and cleaning of a school classroom.
Felix Dlangamandla

Teaching at seventy-seven Eastern Cape schools has been affected within four days of reopening - some due to confirmed Covid-19 cases and others as a result of suspected cases.

Eastern Cape education department of spokesperson Loyiso Pulumani said 48 of the schools were investigating suspicions of the novel coronavirus, and 29 were closed after positive cases were confirmed.

The department, which manages about 5 000 schools, has called for calm.

According to the National Association of School Governing Bodies, 31 of the schools were in the Buffalo City Metro (BCM), incorporating East London, King William's Town, the capital Bhisho and surrounding rural settlements.

Eastern Cape chairperson of the association, Mongameli Peter, said they had warned the department about the premature reopening of schools.

"In Nelson Mandela Bay, there are more than five schools closed and in [the] BCM, there are 31. The numbers are rising by each hour. We are concerned. We had said before that let us use June and July for thorough preparations and open schools in August. This situation is forcing the education stakeholders to review their position on this matter."

One of the latest schools to close in East London is St Anne's Primary in Southernwood.

St Anne's principal Meg Holmes confirmed that the school closed on Wednesday after one of five teachers overseeing 78 Grade 7 pupils was in contact with someone who had tested positive.

"Yes, we are closed until the educator gets their results back, possibly by Monday. If they are negative, we will reopen. The person who tested positive is not from our school. The teacher was called to get tested too," Holmes said on Thursday.

Schools were reopened in a staggered manner for pupils in grades 12 and 7 on Monday, amid great anxiety from parents, SGBs (school governing bodies) and teacher unions over the possible rapid spread of Covid-19.

The province has two metropoles - Nelson Mandela Bay and Buffalo City - and six district municipalities. Schools in these areas were expecting 13 000 pupils in grades 12 and 7 to return on Monday.

West Bank High School in East London was closed within hours of reopening on the first day of school on Monday after a parent tested positive for Covid-19. Principal Tom Dreyer sent all his 49 Grade 7 pupils home and barred parents from entering the premises.

The affected pupil is expected to get test results on Friday, Pulumani said on Monday.

On Thursday, Pulumani said: "We are reliant on science-led interventions in this uncertain time and will not willingly put any learner or teacher's life in danger. Adherence to these operating procedures is non-negotiable and action will be taken against any principal who opens a school that has not been cleaned or where there is a lack of PPE (personal protective equipment)."

Pulumani added it was important to remember that cleaning or fogging is effective in killing the virus on school surfaces.

"Schools do not need to be closed for an indefinite amount of time as cleaning occurs. After advice from the health department on who needs to isolate and [after] cleaning has been done, schooling can resume.

Pulumani added: "We continue to wish all of those infected with Covid-19 a speedy recovery and are still grateful that we have not recorded any deaths in this province due to this disease as a sector. Through our preparation and round-the-clock monitoring, we hope to keep it this way. We aim to save the academic year, while preserving lives."

We live in a world where facts and fiction get blurred
In times of uncertainty you need journalism you can trust. For 14 free days, you can have access to a world of in-depth analyses, investigative journalism, top opinions and a range of features. Journalism strengthens democracy. Invest in the future today. Thereafter you will be billed R75 per month. You can cancel anytime and if you cancel within 14 days you won't be billed.
Subscribe to News24
Related Links
Covid-19: Some Limpopo schools reopen despite water shortages and sanitation challenges
Schools reopening: High court strikes EUSA bid to have decision overturned off the roll
Coronavirus: 18 Western Cape schools closed for cleaning after positive cases
Next on News24
BREAKING NEWS LIVE | Body of woman found, burnt, in KZN sugar field