Tauriq Jenkins, high commissioner of the Goringhaicona Khoena Council, which has opposed the development from the start at The Liesbeek Action Campaign and World Water Day at Two Rivers Urban Park on March 21, 2022 in Manenberg, South Africa. (Photo by Gallo Images/Brenton Geach)

Activists who have long fought the redevelopment of the River Club in Observatory are celebrating a court ruling halting development.

On Friday, the Western Cape High court stopped the R4.5 billion development, ruling that the developers must "consult meaningfully" with all affected people.

Deputy Judge president Patricia Goliath granted the interim interdict. It will remain in place, pending a review of the relevant environmental land use authorisations to develop the historically and culturally significant floodplain.

"Going forward, we will actively pursue the High Court review to demonstrate why the decisions to permit the development were wrong. The River Club is part of a precinct that is currently undergoing grading assessment as a National Heritage Site and which should have been declared a heritage park years ago. We believe that it is not only of national significance but should be nominated," the campaign said in a statement. 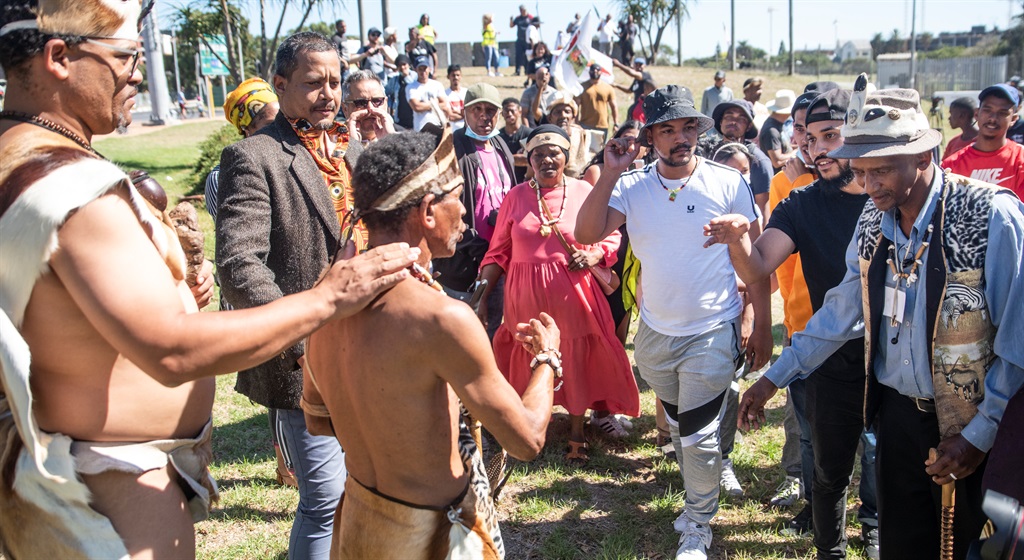 There was tension between two opposing groups at The Liesbeek Action Campaign and World Water Day at Two Rivers Urban Park on March 21, 2022 in Manenberg, South Africa. (Photo by Gallo Images/Brenton Geach)

"We paid respect to our ancestors and prayed for the healing of the terrible destruction of the river and floodplain that has already been caused. We thanked the campaign and all the leaders present. We showed deep gratitude for the powerful decision by Deputy Judge president Goliath to halt the development that allows for ordering the protection of our heritage and safeguarding of the environment," he said.

The First Nations collective also protested outside the River Club site against the ruling.

Chief Zenzile Khoisan, a spokesperson for the Western Cape First Nations Collective, said they are currently studying the judgment. "In our view, this judgment has to be actioned, and therefore we are proceeding with an appeal, which will be done on an urgent basis," he said.

The organisation joined as the eighth respondent in the case.

The Liesbeek Leisure Properties Trust proposed the construction of several 10-storey buildings and 11.7 hectares of building in the middle of a 100-year-old flood plain. Estimated to cost roughly R4 billion, the project plans include residential, retail and commercial components, a hotel, offices, conference centre, and schools.

Twenty percent of the development will be allocated for residential use, of which one fifth will be dedicated to developer-subsidised inclusionary housing.

James Tannenberger, trustee and spokesperson for the Liesbeek Leisure Property Trust, told News24 they are, "... deeply disappointed by the outcome of the interdict application to stop the R4.6 billion River Club redevelopment in Observatory.

"The legal team is studying the judgment circulated by the Deputy Judge president's registrar and is considering the legal avenues available to it in the circumstances," he said.

Did you know you can listen to articles? Subscribe to News24 for access to this exciting feature and more.
We live in a world where facts and fiction get blurred
In times of uncertainty you need journalism you can trust. For 14 free days, you can have access to a world of in-depth analyses, investigative journalism, top opinions and a range of features. Journalism strengthens democracy. Invest in the future today. Thereafter you will be billed R75 per month. You can cancel anytime and if you cancel within 14 days you won't be billed.
Subscribe to News24
Next on News24
LIVE | Covid-19 in SA: Cases rise by 343