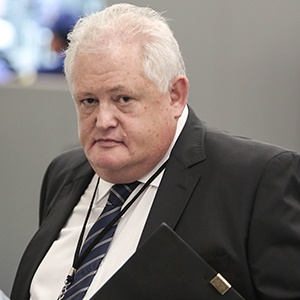 Veteran commercial crimes prosecutor, advocate Peter Serunye has been put in charge of taking a Leviathan case against Bosasa executives and a host of government officials to court.

Serunye was appointed last year to head up a team of prosecutors assigned to the case, having recently finalised the prosecution of former Northern Cape ANC chairperson John Block.

Serunye is a deputy director of public prosecutions within the Serious Commercial Crimes Unit (SCCU) and together with advocate Sandiswa Nkula-Nyoni, also of the SCCU, is now responsible for securing convictions in one of South Africa's oldest and biggest corruption cases implicating government officials and politicians.

News24 understands from a senior Hawks source that major revelations in former Bosasa boss Angelo Agrizzi's testimony before the state capture commission of inquiry are "nothing new" to Hawks investigators.

Over the weekend, News24 reported that the Hawks investigation was now finalised and that Serunye and his team were busy studying forensic reports and other evidence in the final docket.

They would then make a decision on charges and the parties who would be prosecuted.

Spokesperson for the Hawks, Brigadier Hangwani Mulaudzi confirmed that the final docket had been handed to the National Prosecuting Authority (NPA), but would not be drawn on revelations at the commission, saying he was "not about to divulge what was in the docket".

A senior NPA source said that while the weight of public opinion amped up expectations for prosecutors to move swiftly, "the NPA was not a populist organisation".

"The team won't rush anything," the source explained. "But I can say categorically that Agrizzi has not been granted a 204."

News24 previously reported that Agrizzi was in the process of obtaining Section 204 indemnity in exchange for his testimony.

But the NPA refused to confirm or deny this.

Agrizzi took the stand on Wednesday and revealed bombshell after bombshell as he testified about years of alleged corruption at the Krugersdorp facilities management company.

He gave evidence about extensive schemes the company allegedly operated to generate cash to pay bribes on a monthly basis, and claimed Airports Company of South Africa and SA Post Office officials were bribed in exchange for tenders as far back as 2001.

News24 revealed on Friday that this allegedly extended to Dr Khotso de Wee, the secretary of the Zondo commission and former chief operations officer at the Department of Justice.

Following the report, De Wee offered to step aside and was then placed on special leave, pending the outcome of the commission's investigations into the allegations against him.

A decade later - the history of the Bosasa case

Bosasa allegedly bribed former prisons boss Linda Mti and the department's chief financial officer, Patrick Gillingham, to secure four tenders between 2004 and 2007, worth roughly R1.5bn, including the supply of televisions and fencing at prisons around the country, the SIU found.

News24 has established that, between mid-2010 and February 2016, the lead prosecutor assigned to the Bosasa matter was advocate Marijke de Kock, a deputy director of public prosecutions in the SCCU in Pretoria.

Internal NPA documents and interviews with senior NPA bosses show that De Kock may be directly responsible for the delay.

Within months of receiving the SIU report, De Kock identified serious issues with its contents, calling it unreliable and saying it would not stand up to scrutiny in a criminal court.

This was contained in a memorandum dated November 17, 2010, which was forwarded to then National Director of Public Prosecutions (NDPP), advocate Menzi Simelane.

"The SIU report would appear to have been drafted in a careless and almost casual fashion," De Kock wrote in 2010.

"The lack of accuracy and precision with the drafting of the report will give ample opportunity to those seeking to fault it."

De Kock added that the issues with the report created a dilemma by "casting doubt on the reliability" of the report. She refused to respond to detailed questions.

De Kock was removed from the case in February 2016 by another former NDPP, advocate Shaun Abrahams, due to his unhappiness about the lack of progress.

NPA officials who had knowledge of the matter said De Kock was quizzed by then acting head of the SCCU, Lawrence Mrwebi, in January 2013 about why a mandate for the forensic investigation had not been finalised at the very start of the case in 2010.

We live in a world where facts and fiction get blurred
In times of uncertainty you need journalism you can trust. For only R75 per month, you have access to a world of in-depth analyses, investigative journalism, top opinions and a range of features. Journalism strengthens democracy. Invest in the future today.
Subscribe to News24
Related Links
WATCH LIVE | #StateCaptureInquiry: Agrizzi continues his testimony, who will be implicated?
Hitman Mikey Schultz: 'Agrizzi wanted me to intimidate Watson'
EXCLUSIVE: Agrizzi to implicate Zuma, Jiba in Bosasa scandal
Next on News24
LIVE | J&J vaccines in Gqebherha plant still in limbo: Sahpra must assess if fit for use in SA