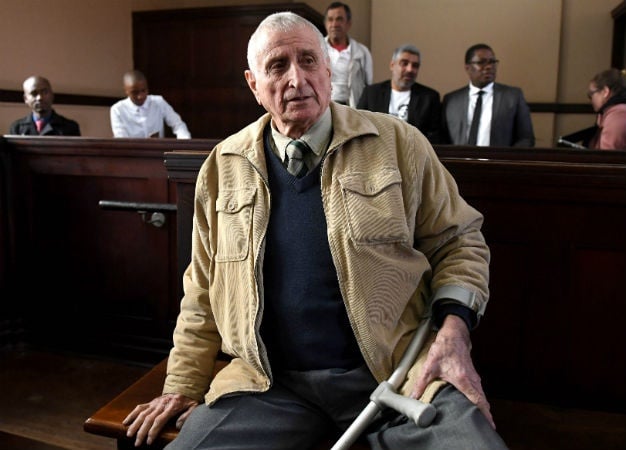 The family of anti-apartheid activist Ahmed Timol says the law must take its course - not only for him, but for many other activists who died at the hands of apartheid-era police officers.

Timol's family was speaking after a unanimous historic ruling was handed down in the Gauteng High Court in Johannesburg earlier on Monday in which the court dismissed apartheid-era cop Joao "Jan" Roderigues' application for a permanent stay of his prosecution.

"The judge has finally now said all those who were responsible for human rights crimes during the apartheid days should be prosecuted. The rule of law must now take place," Timol’s younger brother, Mohammed Timol, said.

READ: Rodrigues 'must face full might of the law' - nephew of Ahmed Timol

He added that his family had been vindicated and said they did not want to see Roderigues jailed. Instead, they want him to disclose the truth and facts about what happened.

"My idea is that he still has an opportunity to make a full disclosure to the NPA of what his role was, and who the people were who were actually responsible for the murder of Ahmed.

"He still has the opportunity, which I think he should take because I don't think it's a nice thing to see an 80-year-old man going to jail for the rest of his life," said Mohammed.

#JoaoRodrigues Judgment in a permanent stay of prosecution application filed by Apartheid-era cop Joao Anastacia Rodrigues will be handed this morning.Rodrigues is accused of involvement in the murder of anti-apartheid activist and teacher Ahmed Timol. (@Sesona_Ngqaks) pic.twitter.com/L9Twybqiv5

Roderigues is accused of involvement in Timol's murder in 1971. At the time of his death, Timol was in custody.

Officers who interrogated him, including Roderigues, claimed that he threw himself out of a window from the 10th floor of John Vorster Square, now the Johannesburg Central Police station.

A 1972 inquest found that Timol had committed suicide, however, after the family disputed this, it was reopened in 2017 and it was found that he was murdered.

Roderigues' argument is that he will not get a fair trial based on the fact that some of the witnesses have died and that because of his age, he has memory loss.

However, Judge Seun Moshidi, while handing down his judgment, said all those factors were issues that had to be looked at during the sentencing stage.

'Justice and the truth were never meant to be compromised'

Moshidi ruled that there was no trial prejudice to Roderigues although there was a delay in the prosecution.

However, he said the delay could not taint the fairness of the trial.

He added that the case was a difficult one - not necessarily because of the legal issues raised - but because of the extent that it compelled the justice system to revisit South Africa's troubled past and examine what happened.

Moshidi said there was also a need to recognise a need for reconciliation and the consequences that invariably went with the murder of Timol.

"Importantly, this case reaffirms that justice and the truth were never meant to be compromised during all that our young society sought to do in dealing with its troubled, turbulent and shameful past.

"The refusal of a permanent stay of prosecution is not a signalling that we are required to be vengeful to those who are alleged to have committed serious crimes in the past but rather an affirmation that the principles of accountability and responsibility for the breaching for the rules of society stand at the doorway of our new constitutional order," said Moshidi.

He added that the National Director of Public Prosecution and Minister of Justice needed to ensure that officials who were responsible for the delay in the case were accountable.

No costs order was made.

Former Truth and Reconciliation commissioner Yasmin Sooka said the judgment was historic for the work of the truth commission.

She said a trial date was not yet on the cards because the defence asked for an opportunity to study the judgment before deciding whether to appeal or not.

We live in a world where facts and fiction get blurred
In times of uncertainty you need journalism you can trust. For only R75 per month, you have access to a world of in-depth analyses, investigative journalism, top opinions and a range of features. Journalism strengthens democracy. Invest in the future today.
Subscribe to News24
Related Links
Timol murder accused says he should benefit from amnesty for pre-1994 crimes
Timol murder case: State Attorney lawyer berated for no-show in Rodrigues stay of prosecution bid
Timol family allowed to intervene in Rodrigues stay of prosecution bid
Next on News24
LIVE | Covid-19 in SA: Cases hit 1 611 143 as death toll rises to 55 183

Lucky Friday for 3 Daily Lotto players!
Full list of lottery results
Lockdown For
DAYS
HRS
MINS
Voting Booth
As South Africa faces down the third Covid-19 wave, how are you keeping your family safe ?
Please select an option Oops! Something went wrong, please try again later.
Staying at home, isolating and being careful
20% - 622 votes
Sanitising and wearing masks when we go out
67% - 2147 votes
Going on as usual, we're not afraid of the virus
13% - 420 votes
Previous Results
Podcasts
PODCAST | Too Many Enemies: Episode 1 - the assassination of billionaire Wandile Bozwana