Chairperson of the National Lotteries Commission (NLC) board, Alfred Nevhutanda and NLC commissioner Thabang Mampane before the Portfolio Committee on Trade and Industry. (Jan Gerber/News24)

ANC MPs have come to the support of the National Lotteries Commission (NLC), which has been the subject of several media reports alleging impropriety in its grant allocations.

When the NLC appeared before the Portfolio Committee on Trade and Industry on Tuesday, ANC MPs - who had one of their whips, Bheki Radebe, who doesn't serve on the committee, in their ranks - dismissed the allegations as "noise" from the media.

They hailed the NLC as "visionaries" and committee chairperson Duma Nkosi "discouraged" the NLC from responding to the allegations.

After the series of articles by veteran journalist Raymond Joseph, which appeared on GroundUp, the NLC appointed an independent investigator to probe the claims.

It gave Joseph an ultimatum to stop writing stories about who it gives funding to and to remove the stories, and its COO, Phillemon Letwaba, has taken voluntary leave pending an investigation.

Most of the allegations against the NLC relates to what it terms proactive funding. Most – 90% - of the grants the NLC pays out follows applications.

However, the Lotteries Act also allows the NLC to "upon request by the minister, board or on its own initiative in consultation with the board, conduct research on worthy good causes that can be funded without lodging an application", according to the NLC's presentation to the committee. This is proactive funding.

Chairperson of the NLC board, Alfred Nevhutanda, said: "I must say, there has been talk, a lot of talk, from one source, one media in the country, who spoke a lot about proactive funding."

He claimed that the information on beneficiaries had been stolen and found in America, and he called on the State Security Agency to investigate the matter.

"The information is generating money for other media," he said. "If you write any story on NLC, you get so much money."

He said they had been inviting anyone to inspect their grant funding.

NLC legal executive manager, Tsietsi Maselwa, said it was common cause that the NLC was "facing lots of negative media coverage" relating to alleged nepotism and conflicts of interest.

He said they had appointed an independent external company to investigate the allegations. The public could make submissions until the end of April, and the company must report back by the end of May.

DA MP Mat Cuthbert said he found Nevhutanda's comments about the stolen information and journalists being paid like something from the "Bell Pottinger playbook" and it is "something I cannot personally believe".

He asked why they didn't provide the committee with a list of the beneficiaries.

ANC MP Simanga Mbuyane said it was only one journalist from "Ground-what-what" who was "following" the commission and he asked if there was an "element of a third force".

ANC MP Judy Hermans said she couldn't recall that they had asked the NLC for a list of beneficiaries and suggested that they wait for the report of the investigation before taking the matter further.

ANC MP Tozama Mantashe said the NLC was one of the best entities in terms of its performance.

"I don't know what the media is all about at an entity who for the past five years displayed this performance."

She said the allegations are made by the "media and its supporters" and she is "very much pleased with the visionaries" at the NLC. 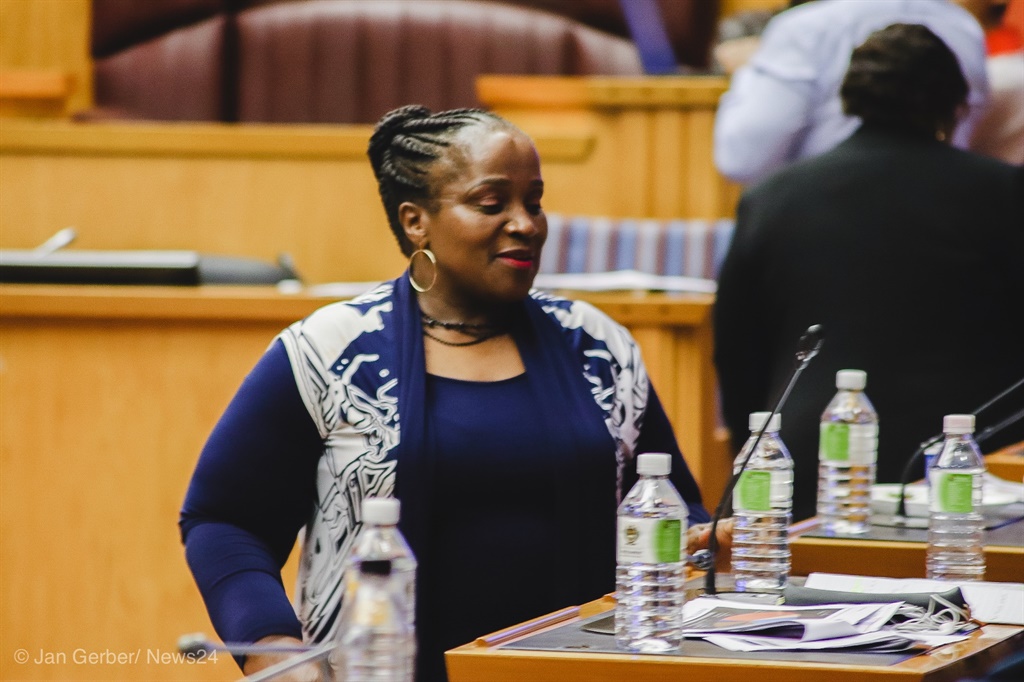 Radebe asked what was happening in the "media space" and said dogs only bark at moving vehicles, not ones standing still.

"They pee on the wheels when the car is standing [still]," Nkosi added.

Nkosi asked the committee to not "put too much issues on the programme from the media".

"It distorts our committee," he said.

"We must not encourage those in the media to question us individually," he said.

He said if you have clean audits, it means you are fulfilling your mandate.

"We'll support you to fight against that," he told the NLC delegation.

He said he had a discussion with the Minister of Trade and Industry, Ebrahim Patel, late on Monday night, and the minister supported the independent investigation. Chairperson of the Portfolio Committee on Trade and Industry Duma Nkosi. (Jan Gerber/News24)

Regarding Cuthbert's request to see the beneficiary list, Nevhutanda said it was against the law to publish the list and that they feared criminals would target the beneficiaries.

Cuthbert said it meant they had been contravening the law for the previous four years because they had published the beneficiaries lists on their website.

On the allegations against them, Nevuthanda said: "We have done nothing wrong; we have given people money.

"We are not hiding something. Every funded project is in the system." The performance of the NLC that the ANC MPs was referring to was that it had, for the past six years, achieved 100% of its targets.

During a break, Joseph told Nkosi that he had been accosted and threatened by a member of the public, who also attended the meeting. This person allegedly led a march to the NLC offices to protest against Joseph's reporting.

After the break, Nevhutanda complained to Nkosi that Joseph spoke to him in a "belittling manner".

Nkosi asked everyone to uphold the decorum.

Journalist @rayjoe tells chair of PC on Trade and Industry that he was threatened by the member of the public on the right of pic, with orange glasses during a break. Committee is dealing with National Lottery Committee @TeamNews24 pic.twitter.com/VFVMFDS44l

We live in a world where facts and fiction get blurred
In times of uncertainty you need journalism you can trust. For only R75 per month, you have access to a world of in-depth analyses, investigative journalism, top opinions and a range of features. Journalism strengthens democracy. Invest in the future today.
Subscribe to News24
Related Links
Refugee mother still waiting for nine months of child grants after Sassa card stolen
Ralph Mathekga: SA braces itself for a tough 2020
Mandy Wiener: Amnesty for corruption? It would look like we've given up
Next on News24
LIVE | Vaccination drive: Archbishop Desmond Tutu and wife Leah receive their shots

1 person bags the jackpot in the Daily Lotto
Full list of lottery results
Lockdown For
DAYS
HRS
MINS
Voting Booth
As South Africa faces down the third Covid-19 wave, how are you keeping your family safe ?
Please select an option Oops! Something went wrong, please try again later.
Staying at home, isolating and being careful
18% - 1078 votes
Sanitising and wearing masks when we go out
68% - 4101 votes
Going on as usual, we're not afraid of the virus
14% - 810 votes
Previous Results
Podcasts
PODCAST | Too Many Enemies: Episode 1 - the assassination of billionaire Wandile Bozwana