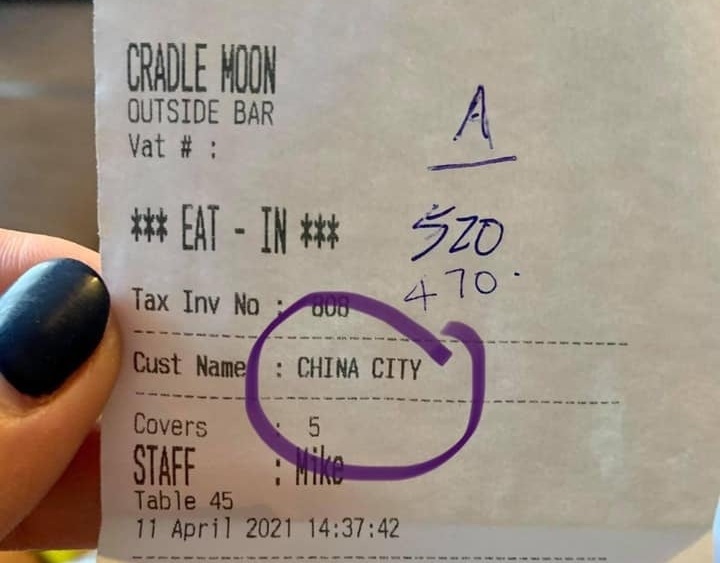 The label 'China City' on a bill assigned to a table of patrons at Cradle Moon in Johannesburg sparked outrage.
PHOTO: Facebook

A Johannesburg restaurant has come under fire after a waiter labelled the bill for a table of customers of Asian descent "China City".

An outraged customer posted a picture of her bill on social media, which contained the words "China City", to describe the table where she and her family sat.

The description was allegedly given to the table because the group is of Asian descent.

The incident sparked outrage on social media, with users criticising the restaurant.

Social media users have come out swinging, describing the owners and staff as "small-minded", "disrespectful" and "discriminatory".

In 2016 there was a huge stink when a Black waiter described his table of "2 Blacks" on the bill at the Bungalow in CPT? Let me show you one in JHB that happened on the 11/04/21 at Cradle Moon restaurant to members of the Chinese community & how the owner responded. Disgusting.. pic.twitter.com/h2eFJtt7my

Shared alongside the bill was a screenshot of Cradle Moon managing director Andy Dott's responses, stating it was an innocent mistake and commenting that social media users had a "chip on their shoulder".

Michelle Lee, one of the patrons, said she had received the bill on Sunday.

She visited Cradle Moon with her family and friends. They had gone on a hike before sitting down to lunch. The restaurant had not been too busy, the service had been good and the food enjoyable – until the bill arrived at the table.

The waiter had used the words "China City" on the bill to describe Lee and her party.

It just caught my eye, and I felt that it was not acceptable. I was with my children and didn't want to make a scene, but I emailed the restaurant when I got home.

Dott told News24 the label had been an "innocent mistake".

"It obviously touched a nerve. I had no idea it was that sensitive an issue among the Chinese community, who must also be feeling the brunt of victimisation. It's not like people are trying to hide the word 'China', which is used in China Town and so on. The waiter, who is black, is devastated and we've already apologised to the customers," he said.

Dott explained that customers often moved to different tables, which caused the restaurant to abandon table numbers in favour of a description allocated by waiters.

"Based in Muldersdrift in Johannesburg, we have a melting pot of customers. This incident has been blown out of proportion. It was an innocent mistake and there was no racial inclination behind it," Dott added.

Lee said the restaurant manager contacted her on Monday to apologise and she received a written apology from the waiter. However, the response from Cradle Moon's owners has been lacking, Lee said.

I understand where they're coming from, but it speaks to a lack of education among their staff. There are other ways to identify a table, such as by name or number of people. I was quite offended by it and it has caused anger in the Asian community. We shouldn't be profiled like that.

Lee, who is of Taiwanese descent, said it is important to create awareness of the numerous races classified as Asian, and labelling Asian people as "China City" is "derogatory and unacceptable".

"In this day and age, especially in light of South Africa's history of xenophobia and apartheid, people should not discriminate like that," she said.

"I don't want this to continue into my children's generation."

The incident took place only a month after the social group Stop Asian Hate was formed in response to the murders of Asian women in the US.