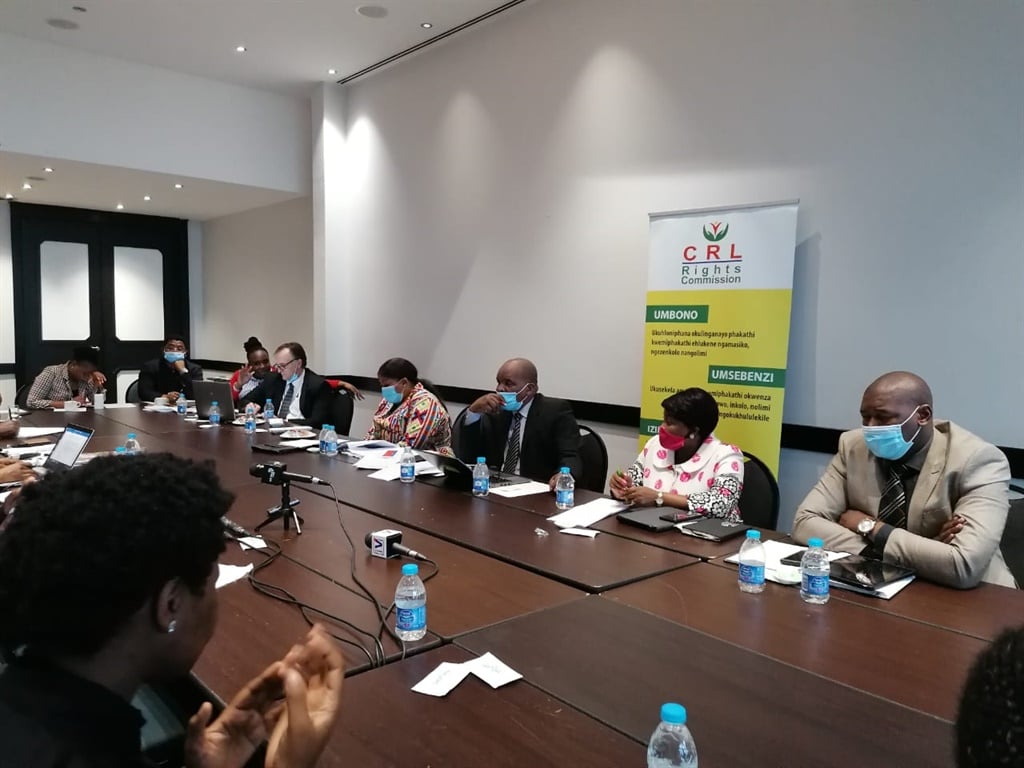 Simphiwe Mhlebela, a former member of KwaSizabantu Mission has testifed before the Commission for the Promotion and Protection of the Rights of Cultural, Religious and Linguistic Communities (CRL Rights Commission) that he witnessed how some people seeking help for drug addiction at the mission’s rehabilitation facility were "beaten until they peed in their pants".

Mhlebela was speaking at the CRL Commission on Wednesday as part of their probe into allegations of abuse at KwaSizabantu Mission.

In 2017, Mhlebela was fresh out of prison when he decided to make his way to the mission – which had given hope during his time behind bars after his arrest during a strike – which he led – which turned violent.

He was excited to be free once again and made his way KwaSizabantu.

'Fear of being prisoner doubled'

But, on arriving at the mission, Mhlebela said he was sent to the rehabilitation facility despite never having taken drugs.

"[T]he feeling of being a prisoner was doubled," he said.

He explained that he was, on two occasions, introduced to schools that the mission had visited as a "drug addict", which had "humiliated" him.

"I didn't know what to say about drugs because I’ve never touched them, I was so embarrassed," Mhlebela said.

KwaSizabantu Mission has rolled out the red carpet for KZN government officials who visited the compound for a fact-finding mission. | @azarrahk https://t.co/pcu9bMlikE

He said the mission did not allow him to have a cellphone, to speak to women or even to dance – which were considered a sin.

There were many such rules "which were not written down", Mhlebela added.

'Beaten until they peed their pants'

Mhlebela explained he had "many times" seen the members of the mission severely beating others.

He explained there were "tough guys" at the mission who had a room called "room number three".

"Late [at night], they brought these drug addicts and they beat them until they peed in their pants.

"Many times, I saw that because I used to patrol at night," Mhlebela said.

"I reported that several times to the officials until they asked me, 'why is this bothering you?' I realised that they approved this thing, what is happening?"

KwaZulu-Natal Premier Sihle Zikalala has said that if allegations of wrongdoing are proven at the KwaSizabantu Church Mission, then the law must take its course. | @kaveels https://t.co/yvAW7dAgWB

Mhlebela said a young man was also beaten and tied to the main gate of the mission. "I was the one who untied that boy."

Mhlebela told the commission that "serious sexual harassment" had happened at the mission during its famous youth conferences.

He testified that after many youth conferences, officials fired drug addicts who had allegedly raped girls as young as 10-years-old.

"I went to the leadership [and asked], why don't we separate this conference and then, maybe in June, we have a youth conference only for girls and in December we have one only for boys."

"It seemed like I was putting a bomb on them," Mhlebela said.

Last year, he decided to leave the mission, firmly believing it was a cult.

Before appearing before the CRL Commission, Mhlebela trekked from Durban to Johannesburg to share his story, after being made to sleep outside the mission last week.

Mhlebela explained that, before making the decision to share his story to the commission, he would ask KwaSizabantu to account for allegations against them.

A day before a government oversight visit to the mission last week, Mhlebela was determined to take the opportunity to speak to the mission’s leadership in person.

But according to Mhlebela, he was denied entry and spent the night outside the mission, waiting for answers.

The next day, government officials were welcomed in.

Mhlebela decided to get on a taxi and head to Johannesburg, determined to tell the CRL Rights Commission his story – unaware that their probe into allegations of abuse at the mission would be continuing.

Now sitting at the commission’s offices in Johannesburg a week later, Mhlebela waited patiently in the lobby – his notes in one hand and a laptop in the other.

He told the commission that he wanted KwaSizabantu to account, adding that he believed they were a cult.

"I decided to go to the mission, last week actually, to ask them… to speak the truth [and] accept the punishment, because I believed it is only the truth that can set them free," Mhlebela explained.

"My problem is that I love that place so much, so on Wednesday after I had sleepless nights about this matter, I went there and arrived at the mission’s gates at 14:00. They didn’t allow me to go back inside, they said because of the Covid-19."

Mhlebela added that he phoned his counsellor inside to help him speak to the leadership, his counsellor replied they were busy, but she would try and assist him.

"I waited outside until it was too late, and I ended up sleeping outside the gate. But on Thursday, when government officials arrived, they opened for them, and they pretend that everyone is welcome in the mission."

"When they left, they closed the gates again. This is how I decided to come to the commission," he said.

KwaSizabantu last week walked out of the commission's hearings, saying they wanted the chairperson to recuse himself.

The mission has previously said many of the allegations pertain to specific individuals, and not the mission as a whole.

They are due before the commission next week.

We live in a world where facts and fiction get blurred
In times of uncertainty you need journalism you can trust. For 14 free days, you can have access to a world of in-depth analyses, investigative journalism, top opinions and a range of features. Journalism strengthens democracy. Invest in the future today. Thereafter you will be billed R75 per month. You can cancel anytime and if you cancel within 14 days you won't be billed.
Subscribe to News24
Related Links
Pastor tells CRL inquiry KwaSizabantu has history of 'avoiding accountability'
LETTERS TO THE EDITOR | aQuellé should still be sold during investigations into KwaSizabantu mission
CRL Commission's probe into KwaSizabantu resumes in Gauteng
Next on News24
BREAKING NEWS LIVE | Cape Winelands firefighters battle blaze in Pappegaaiberg