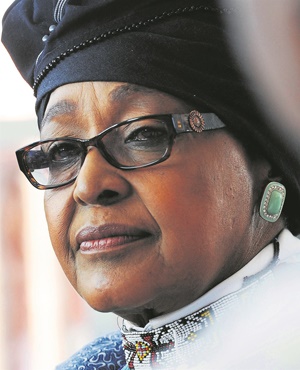 Not everyone sees Winnie Madikizela-Mandela as a struggle icon. (File, Netwerk24)

The life and character of Winnie Madikizela-Mandela, who fought in a decades-long struggle against apartheid, can be described as both fierce and complex.

Having endured more than a year of solitary confinement and banishment to Brandfort in the Free State, Madikizela-Mandela was a defiant and fierce opponent of the apartheid government.

She was later implicated in the disappearance of Stompie Moeketsi Seipei and other anti-apartheid activists who had sought shelter at Bishop Paul Verryn's parish in Soweto.

Jerry Richardson, a coach at the Mandela United Football Club, was jailed for the murder of Stompie, whose body was found days later on a waste ground near Madikizela-Mandela's house with his throat slit.

Richardson died in prison in 2009.

Verryn said his life had been intertwined with Madikizela-Mandela's for about three decades.

"Strangely enough, I haven't had many interactions with her. There is this strange paradox in that we didn't meet, speak, interact at any length ever, and yet our lives have been so intricately intertwined that she's actually been a presence in my life for 30 years," Verryn said.

The disappearance and subsequent murder of Stompie created the "complex" and "intimate relationship" between the revered bishop and Madikizela-Mandela, affectionately known as the Mother of the Nation.

Verryn said he was "very, very conscious" of Madikizela-Mandela's presence in Orlando after she moved in a mere three blocks away from him in the 1980s.

"The intensity of everything that happened after that... I can still clearly remember getting a phone call at 07:45 on the 31st of December saying that children... had been taken from the house," he said.

Stompie, along with Kenny Kgase, Pelo Mekgwe and Thabiso Mono, were taken from Verryn's home in Orlando on December 29, 1988.

The disappearance and death of Stompie was where Verryn and Madikizela-Mandela's "intimate relationship" started.

"Then began the saga that has been in press ever since, including meeting one another at the TRC (Truth and Reconciliation Commission). It was strange, in a sense a very intimate relationship, in the press, as it were," he said.

During the TRC hearings in the 1990s, a defiant Madikizela-Mandela was begged by Archbishop Desmond Tutu to reveal what happened to Stompie and the others.

In an interview later, Madikizela-Mandela described her anger at being pushed for an apology.

"I was seething with rage, to this day I ask God to forgive me for not forgiving him. He was acting there for the public, acting there for Stratcom, begging me to say I am sorry," she said in the interview.

Also read: 'I don't bear any grudges, even against my torturers' – Winnie Madikizela-Mandela in 2013 interview

Of her time at the TRC hearings, Verryn said it was another one of the complexities of her life.

"It was difficult. We were living in very difficult times. Here, the wife of a president, on these horrendous charges, and I'm not sure that the TRC actually got to what the ultimate truth was in this story," he said.

"That would be my critique. But let me say, there's another part of me that completely understands. I suppose Desmond's phrase that something went terribly wrong sticks."

Verryn said the kidnapping and murder of Stompie and subsequent events led him to deal with a lot of trauma and anguish.

"I have almost prayed for Winnie every night of my life since then. I think that that, for instance, has helped me towards my journey of some kind of recovery."

"It is something that haunts me," he said.

"What on earth gave me the kind of idealism that thought he was safe and beyond danger? And then the story unfolded as it did."

End of an era

Verryn said Madikizela-Mandela's death signalled the end of an era for many people that saw her as a strong force in the liberation of South Africa.

"She symbolised so much that brought hope to so many people," he said.

He said the complexities and contradictions of her life were borne out of the role and impact apartheid had on her life and relationships.

"I don't think many people understand the ramifications and the intricacies of how apartheid and the sanctified separation, as it were, damaged this country's imagination and its ability to treat people as human beings."

We live in a world where facts and fiction get blurred
In times of uncertainty you need journalism you can trust. For only R75 per month, you have access to a world of in-depth analyses, investigative journalism, top opinions and a range of features. Journalism strengthens democracy. Invest in the future today.
Subscribe to News24
Related Links
'I don't bear any grudges, even against my torturers' – Winnie Madikizela-Mandela in 2013 interview
EFF condemns call for inquest into Winnie Mandela
Mam' Winnie was the tree that carried the fruits of our freedom
Next on News24
LIVE | SA records 1 559 113 Covid-19 cases and 53 356 deaths