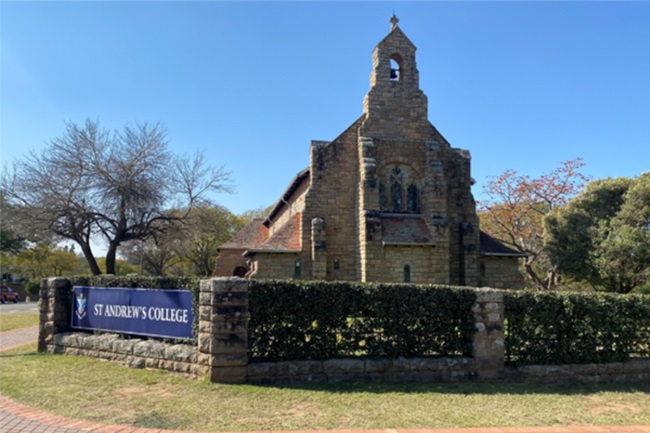 Despite the confiscation of "weapons", like cricket bats, golf putters and sticks, which were found in St Andrew's College (SAC) hostel rooms, bullying and "lashings" flourished at the school, according to an independent review.

The review investigated the school's handling of allegations against former SAC water polo coach David Mackenzie, as well as those of bullying and substance abuse.

The review board, chaired by retired judge Dayalin Chetty, found Mackenzie had been grooming boys while employed at the all-boys Eastern Cape school. The review board did not refer to allegations, nor make findings, of sexual abuse.

However, the report detailed how "bullying was deeply entrenched at St Andrew's College".

It featured several redacted accounts, including one in which a pupil had been removed from the school following bullying and threats. After leaving the school, the pupil continued to receive threatening social media posts and video recordings.

In another case, from 2020, a pupil was "brutally lashed more than 14 times both by his peers and Grade 11 boys", the report said. A Grade 11 boy was expelled after the incident.

The school has several interventions in place to address bullying, but these only served to see the behaviour "[retreat] underground", where it "remained covert and found protection in the culture that had developed" in Espin boarding house.

The report also found there was a "culture of secrecy", which prevented pupils from speaking out against their aggressors.

"Notwithstanding SAC's commitment to a 'Zero Tolerance to Bullying' approach and recognition of its duty to care obligation to the boys, an endemic system of violence continued to exist at the school. They highlighted the involvement of senior boys, the belief in hierarchy as a principle and asserted that it was condoned by the house prefects, and - apparently - the house master," the report said.

The report found that, while staff had confiscated the weapons, not enough effort had been made to address when and why they were used.

The Review Board expressed the view that any incidents of lashings should be reported to the South African Police Service as it constituted the criminal offence of assault.

The board found that headmaster Alan Thompson was "relentless in trying to address traditional practices that included bullying".

However, it appeared he did not have the requisite support from all staff and that he "did not use his best endeavours … to investigate all incidents of bullying or take action when it was reported, unless parents insisted on him doing so".

Thompson stepped down with immediate effect on Wednesday as the findings of the report suggested he had not taken adequate action to address complaints over Mackenzie.

The claims against Mackenzie first emerged in My Only Story: Back to School, a six-part investigative podcast series looking into the death of 16-year-old Thomas Kruger.

The podcast series, a co-production by non-profit company My Only Story and News24, was extensively referred to in the review board's report.

Mackenzie's lawyer, Tiaan van Schalkwyk, said they noted the contents of the report. He said his client would need time to study the report, but flagged that it was based on "untested evidence".

LISTEN TO THE ENTIRE SERIES HERE: