A Golden Arrow bus was set alight in one part of Cape Town and tyres and rubble were burnt in another during protests for electricity and jobs on Thursday.

Philippi residents woke up to flames after angry protesters took to the streets where they blocked roads and burnt tyres and rubble as they demanded electricity in the Siyangena informal settlement.

According to police spokesperson Brigadier Novela Potelwa, the protest started at around 04:00 in the morning.

"Public Order Police and Philippi East members are monitoring protest action in the area after a group of community members from the Siyangena informal settlement (behind the Shoprite and the court in Philippi) started protesting this morning at about 04:00", said Potelwa.

Golden Arrow Bus Services spokesperson Bronwen Dyke-Beyer said one bus was torched on the corner of Govan Mbeki and Eisleben Road at around 04:30.

"When our bus turned the corner, the driver found that large stones had been placed in the road – he attempted to reverse but unknown assailants began to pelt the bus with stones", said Dyke-Beyer.

She said the driver fled along with two other drivers who were on the bus. One was robbed of his belongings and another one sustained a neck injury.

"The bus was then set alight and has been completely gutted," she said.

In another protest, in Hout Bay, tyres and rubble were burnt on the road.

Public Order Police and the City of Cape Town's metro police and traffic services officials were deployed to the area to monitor a protest by a group of about 50 women. 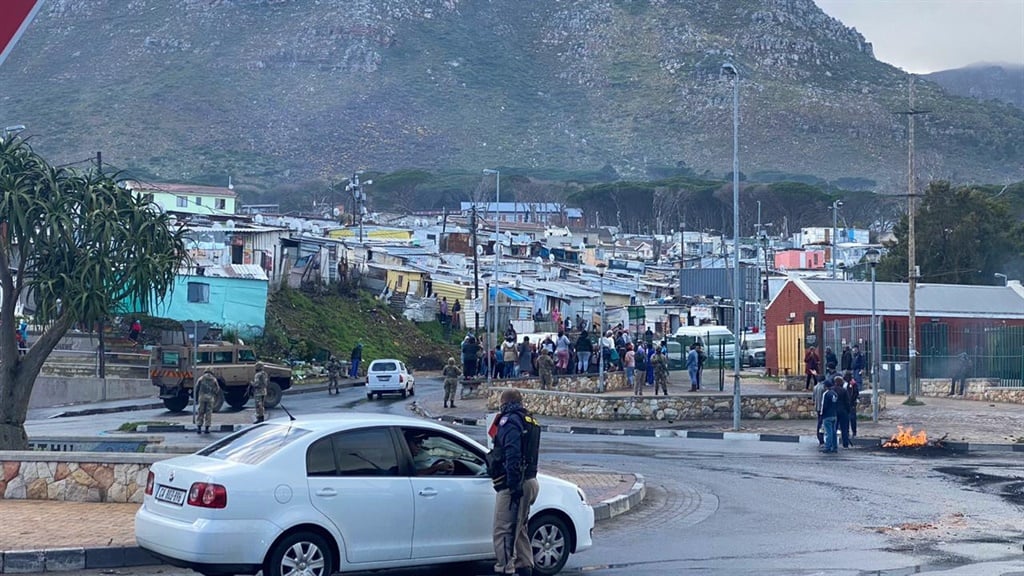 On Wednesday, a law enforcement vehicle was petrol bombed following a protest in Vrygrond. It was parked at the home of an off-duty officer, the City of Cape Town said on Thursday.

Law enforcement spokesperson Wayne Dyason said in a statement that officers responded to protest action in the area on Wednesday and that roads were blocked and tyres were set alight.

"They managed to push the crowd back into the Vrygrond area, away from Prince George Drive," he said.

A crowd had attacked a City vehicle that was parked at the home of an off-duty Law Enforcement officer on Wednesday.
Supplied, Wayne Dyason

"The officers were then informed a crowd had attacked a City vehicle that was parked at the home of an off-duty law enforcement officer in the area. Officers managed to retrieve the vehicle, which had been petrol bombed and took it to a safe place."

No one was injured and there were no arrests.

Sporadic protests have been ongoing across the city since July and many were over land. Some turned violent and involved the destruction of property, stone throwing and petrol bombings.

We live in a world where facts and fiction get blurred
In times of uncertainty you need journalism you can trust. For only R75 per month, you have access to a world of in-depth analyses, investigative journalism, top opinions and a range of features. Journalism strengthens democracy. Invest in the future today.
Subscribe to News24
Related Links
Three arrested in connection with Samwu protests at Tshwane House
Residents or illegal occupiers: Security guards, community clash over access to disputed farm
Hundreds protest in Joburg against government's response to Covid-19
Next on News24
LIVE | Covid-19 in SA: Cases at 796 472 as death toll hits 21 709