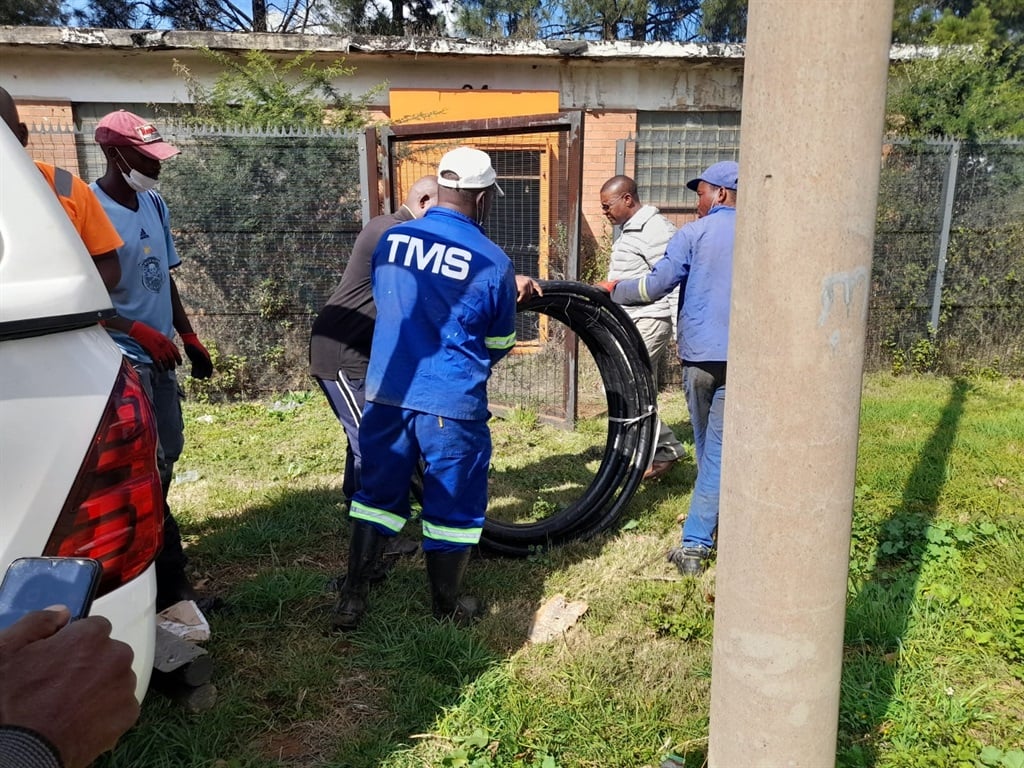 Emfuleni workers with a new copper cable to replace the stolen one.
PHOTO: Ntwaagae Seleka/News24

Woes are piling up for the embattled Emfuleni municipality as people target electricity substations.

Two substations were hit on Wednesday night in Vanderbijlpark. The substations are a stone's throw away from each other, and were targeted during load shedding.

A resident, who refused to be identified, said a group of men were seen going in and out of the substation.

"Our neighbours told us they saw a group of men entering and leaving the place. They later returned pushing a shopping trolley. After leaving the place for the second time, we heard a loud bang. They had stolen a big cable.

"We rushed and quickly battled the blaze. We managed to extinguish the fire before it spread," she said.

DA councillor Peter Verbeek accused the municipality of failing to protect its infrastructure.

Verbeek said they were worried that funds, which were meant to protect infrastructure, could be diverted elsewhere.

He said the substations had been targeted because of a lack of security.

We are aware of a trend done by gangs operating during load shedding schedules. This has been happening for the past two to three years. The municipality is losing millions of rand from cable theft.

"Cable theft has become a big business enterprise. We are in a continuous cycle of replacing lost cables. Three weeks ago, three people entered a substation claiming to be municipal workers. They cut a live main cable, leaving the substation on fire. Residents of that area spent a week without power due to that," he added.

Verbeek said the loss of power was affecting citizens and chasing away businesses.

"Businesses can't trade without electricity. Some are closing. We have been told the municipality is increasing its by-laws. There is a lot of money that we can redirect to protect our infrastructure.

"The municipality is not protecting its infrastructure at all. They should be protecting them (infrastructure), but they are not. Since 2018, we have been in a vicious circle, where claims by creditors, staff, and attachment of bank accounts have taken place to such an extent that we lost a lot of money. We have not gained that money.

"Emfuleni is doing little to protect infrastructure. Residents and businesses are trying to protect our substations," said Verbeek.

Emfuleni's acting communications manager, Makhosonke Sangweni, claimed they were spending a lot of money on refurbishment and replacing the old transformers.

"We request all communities to play their part by looking after public infrastructure. The priority for the provision of security to the substations is done in line with risk assessment in conjunction with our electricity department.

Cost considerations also play a role. Some of the substations never had an incident, but as soon as risks are identified, consideration is done for security deployment.

News24 reported that a man was caught red-handed on top of a 20MVA transformer at a substation in Vereeniging.

The injured and bare-chested man claimed he was thrown onto the transformer by municipal workers. His shoes, though, were lying under another transformer nearby.

The municipality disputed his claims and accused the man of attempting to steal electricity cables, which is why he was electrocuted.

He was later rushed to the hospital.

The municipality is probing the incident.

Meanwhile, a cable was severed at the Eskom's Tutuka power station this week as it was finalising preparations to return Unit 5 to service.

The damage to the cable delayed the unit's return to service by three days because it took some time to locate the fault.

The cable was repaired, and the unit was returned to service.

The power utility added that, a few hours later, it discovered an air pressure drop and the same unit 5 turbine systems, which control air for the operation, were de-energised.

The control air pipe supplying the turbine systems had been cut with a power tool, and then removed.

The pipe was also repaired.

"Eskom believes these were deliberate acts of sabotage by someone who had access to the site, where only employees have access and knows the security features in the area quite well. Eskom has laid criminal charges. The forensic team is assisting with the investigation.

"This is the fifth incident of sabotage since March 2021. All of these have been reported to the police. Eskom has employed measures to improve security at all its power stations, in general, and Tutuka power station, where additional security personnel and smart technology have been introduced," Eskom said.