Hundreds of foreign nationals sought refuge in Cape Town's Central Methodist Church after police fired stun grenades to get them out of the arcade where they were holding a sit-in outside UN offices.

After the initial shock of removal by the police, with the Methodist Church's Reverend Alan Storey at times positioning himself in front of the water cannon, those who had escaped arrest moved in to the church building on Greenmarket Square.

The protesters had been staging the sit-in since October 8. They wanted to be evacuated from South Africa following incidents of xenophobia and because they felt targeted as foreigners.

On Wednesday, they carried their blankets, mattresses and bags inside and up the church's steps and within an hour, every pew in the church was taken up.

The altar was turned into a makeshift dormitory with duvets laid down near the communion semi-circle and the mother and baby room was packed with women and children.

Storey calmly helped co-ordinate the arrivals, and told representatives of the foreign nationals that the baggage was taking up a lot of space, making it more difficult to accommodate more people.

The church's aisles also became instant bedrooms, and mothers sat and fed their children after a chaotic morning.

They were in a holding room while some people filed in and out to find out which children still needed to be reunited with their parents.

There were two children still to be reunited with their mothers by Wednesday afternoon. It is understood that 40 children were taken away from the scene by police, to the police station.

The women in the holding cells looked after the lost children until they could be taken to their parents at the Methodist Church.

About 10 social workers with clipboards and notebooks also entered to assess the situation and the Department of Home Affairs was also expected to arrive.

Arrangements were also being made to get a medic into the holding facility.

At least two people were taken to hospital after the police and Cape Town's Law Enforcement unit carried out a court order to remove them from the Waldorf Arcade.

The owner of the building in which the Waldorf Arcade is in got a court order to have the foreign nationals removed. (Jenni Evans, News24)

Children were pulled from their mothers' arms, men and women were dragged to police vans as police and law enforcement officials forcibly removed several hundred foreign nationals holding a sit-in at the arcade since October 8.

Mothers screamed hysterically as their children were taken away as they themselves were dragged off to waiting police trucks.

Couples clung to each other as they were dragged along the cobblestones of Burg Street.

"Come and kill us!" shouted people as the police gave them another warning to move before drenching them again in cold water from a water cannon.

Abandoned food, damaged belongings and piles and piles of blankets were left on the arcade floor as a group of crying women fanned another woman who appeared to be unconscious.

She was led away on a stretcher, while another woman lay on the cobblestones of the Burg Street walkway with people checking her pulse.

Some passersby were shocked by the force shown by the police, while others shouted that the police were doing the right thing.

It is understood that two people were taken to hospital for treatment and at least three others injured.

News24 also observed a man seemingly unable to walk, being pushed into a police van with blood on his face.

Western Cape police said at least 100 people had been arrested in an action supported by a court order obtained by the owner of the building through which the arcade runs.

In a statement, Brigadier Novela Potelwa said the court order was granted on October 18 at the Cape Town Magistrate's Court after the landlord made an application to evict the group.

"The [SA Police Service] in the Western Cape is aware of earlier efforts to engage the group facilitated by role players such as the UNHCR (the UN Refugee Agency) to resolve the impasse in an amicable manner. Unfortunately the attempts yielded no positive result." 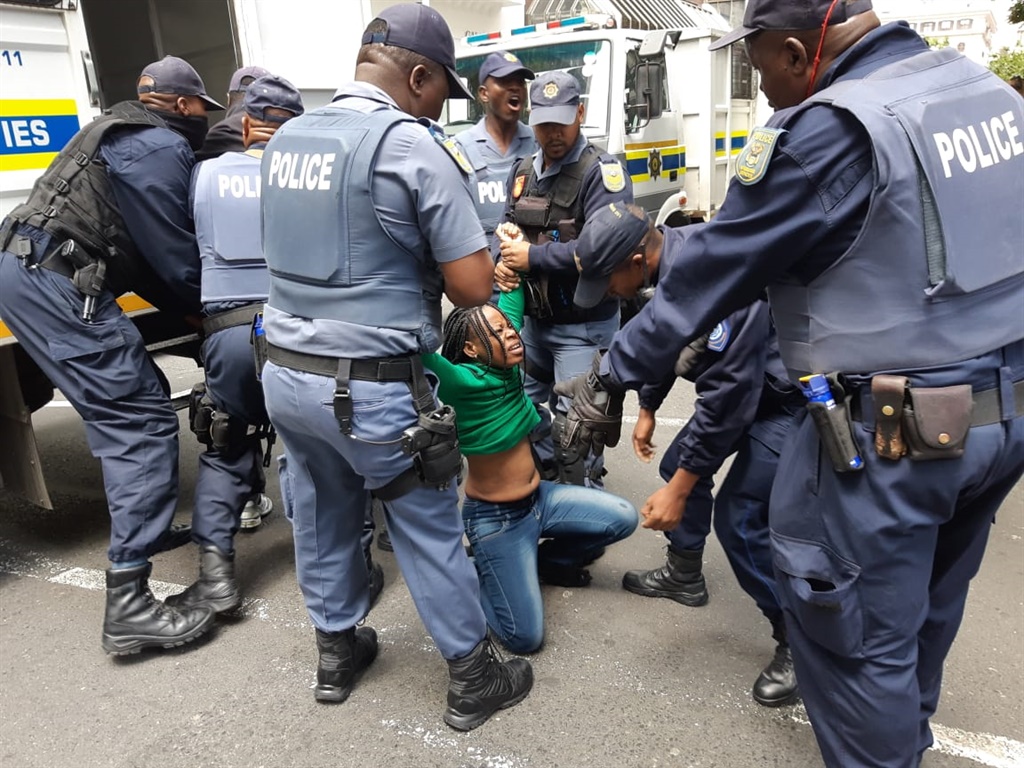 Police used force to remove foreign nationals who had been camped out in an arcade in Cape Town's CBD. (Jenni Evans, News24)

The people staging the sit-in told News24 earlier in October that they wanted to be evacuated from South Africa following incidents of xenophobia and because they felt targeted as foreigners.

They did not want to return to their countries of origin, but to another country where they could feel safe.

They also struggled to get proper documentation, leaving them in limbo, and when they did get documentation from the Department of Home Affairs it was not accepted by prospective employers.

The UNHCR said at the time that the people do not meet the criteria for evacuation to a third country.

As the stand-off between police and refugees eased, a truck moved in and bags, blankets and mattresses were packed onto the back of it, while cleaners tossed cardboards and duvets over barricades erected at the arcade's entrance.

A tow truck removed vehicles that were filled with blankets and suitcases.

We live in a world where facts and fiction get blurred
In times of uncertainty you need journalism you can trust. For only R75 per month, you have access to a world of in-depth analyses, investigative journalism, top opinions and a range of features. Journalism strengthens democracy. Invest in the future today.
Subscribe to News24
Related Links
Bleeding, chaos as police arrest 100 foreign nationals outside UN refugee offices in Cape Town
WATCH | Informal village springs up in Cape Town CBD as sit-in continues at UN refugee offices
Dozens of foreigners camp outside UN offices, want to leave South Africa
Next on News24
LIVE | SA records 1 571 348 Covid-19 cases and 53 995 deaths