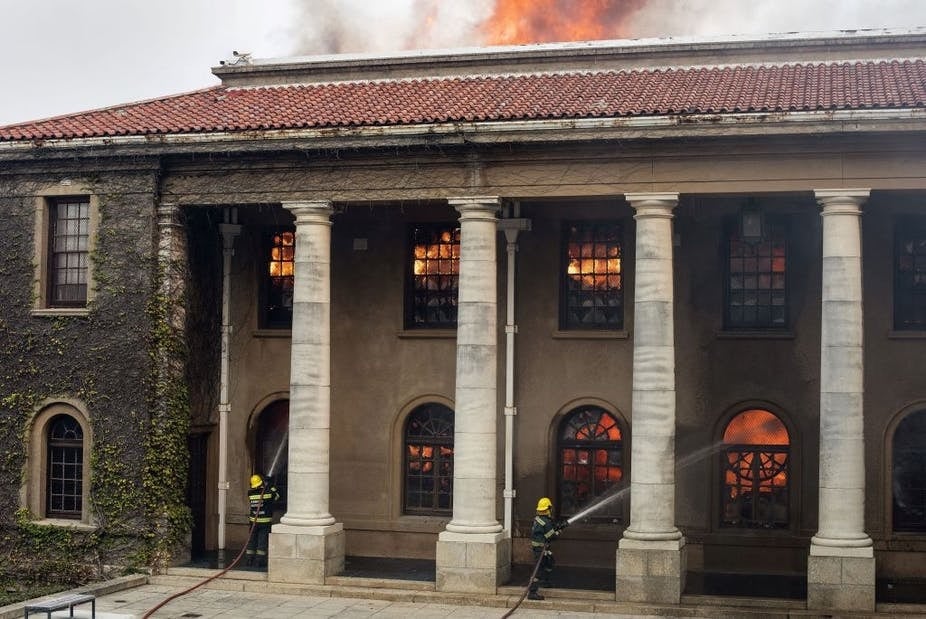 Firefighters trying to extinguish a fire in the Jagger Library, at the University of Cape Town.
Rodger Bosch/ Getty Images

Deputy Minister of Higher Education Buti Manamela believes the destruction of the University of Cape Town's African Studies Library and other buildings is an opportunity to re-imagine the university architecturally.

The library was gutted during last week's fire on Table Mountain.

The Rhodes memorial restaurant and some student residences at the upper campus also went up in flames.

Manamela and the CEO of Higher Health, Ramneek Ahluwalia, visited the campus on Saturday.

"We really want to see the university back in action, and I am also quite excited to hear that, in as much as this is a tragedy, it is also an opportunity to re-imagine the university differently, especially the library and the residences, to give a bit of a modern, heritage cultural touch while also preserving the history," said Manamela.

"I don't think there is a disconnect, and it shouldn't mean the fact that the other library was burnt and we lost all of that. I do not necessarily think that re-imagining means wiping out the history. It means integrating the past and present, so that they can both tell a story out of the destruction."

Deputy Minister @ButiManamela is in the Western Cape at the University of. Cape Town for a walk-about following the wildfire that destroyed part of the campus during the weekend of 18 April 2021.@RamneekHH @UCT_VC pic.twitter.com/BAjIEF18aj

Manamela commended the university for its swift action in accommodating the 4 000 displaced students as well as its plans to rebuild.

Meanwhile, the Minister of Forestry, Fisheries and the Environment Barbara Creecy visited Table Mountain National Park on Saturday, in a bid to determine the extent of the damage.

About 600 hectares of land was destroyed during the fire.

"When you go up in the helicopter, you can see part of the mountain looks like the surface of the moon. All the vegetation is completely destroyed. There are other areas where trees are still smouldering, and we still have crews responsible for the mop-up operations on the mountain," said Creecy.

Creecy commended firefighters for their bravery, saying the damage could have been worse.

"I think the other thing that one realises when one is up there, as vast and terrible as this devastating fire was, it could have been much worse. You can see a very clear line where the fire was stopped by our firefighters in the city bowl," she said.