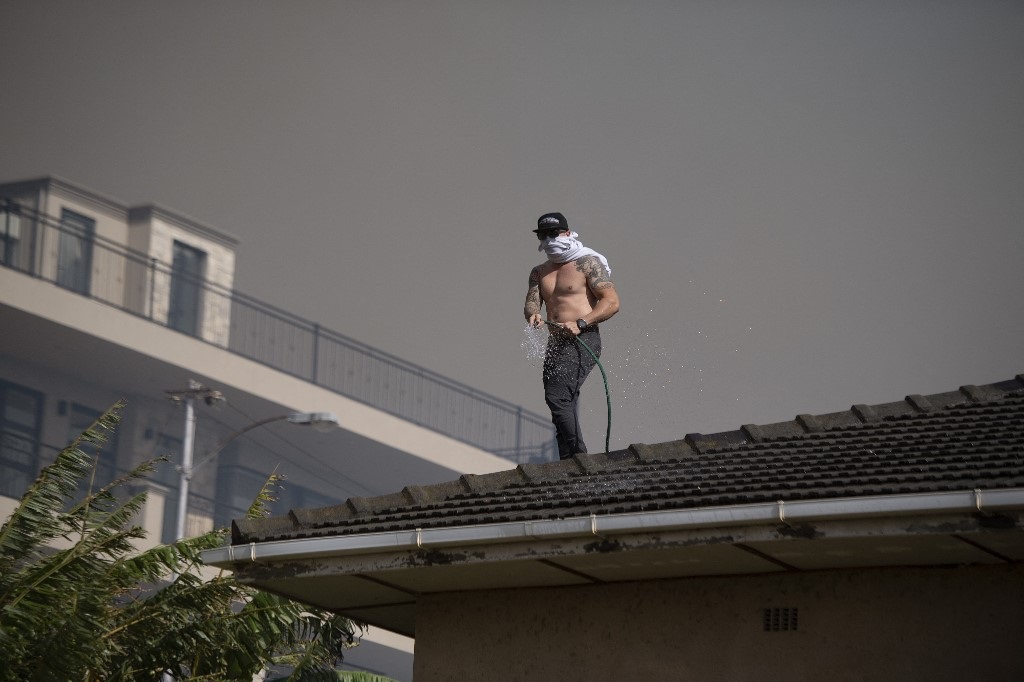 A man sprays water on the roof of his house as fire-fighting teams work about 100m away to keep the fire from crossing Philip Kgosana Drive.
Rodger Bosch

A devastating veldfire on the slopes of Table Mountain has destroyed 650 hectares – and firefighters will be on standby throughout the night to prevent any flare-ups.

"Firefighters will remain on the scene to secure the areas burnt, and continue with mop-up operations. The teams worked hard and will remain on-site to ensure the area's safety, monitoring any possible flare-ups for the next coming days. We are not yet out of the woods."

Overnight, the wind dropped significantly, and helicopters have been waterbombing the fire lines since early on Tuesday morning.

Residents, who were evacuated in areas close to the mountain, have been informed that they can return home. Aerial shot of the extent of the damage caused by a massive blaze in Cape Town.
Facebook SANParks Table Mountain National Park

Our first priority remains fully extinguishing all of the fire lines. Over the next few days, firefighters will continue to dampen down the affected areas and monitor for flare-ups until we are one hundred percent sure the fire is out.

"Damage assessments will be done once the fire has been extinguished. The investigation into the cause of the fire will be conducted thereafter."

- 2 houses in the Rosebank area;

- 6 education buildings on the University of Cape Town campus;

- 2 heritage buildings, including the Mostert's Mill and UCT Jagger Library; and

Nine civilians were taken to hospital, suffering from breathing challenges due to smoke inhalation, and six firefighters sustained injuries.

The Editors' Table | On the firebreak: Covering Cape Town's inferno

MEC for Safety and Security JP Smith said: "We can at this stage say the fire is contained, we have fewer resources used on the fire. Our next mission will be to initiate a risk assessment to establish the cost of the damage."