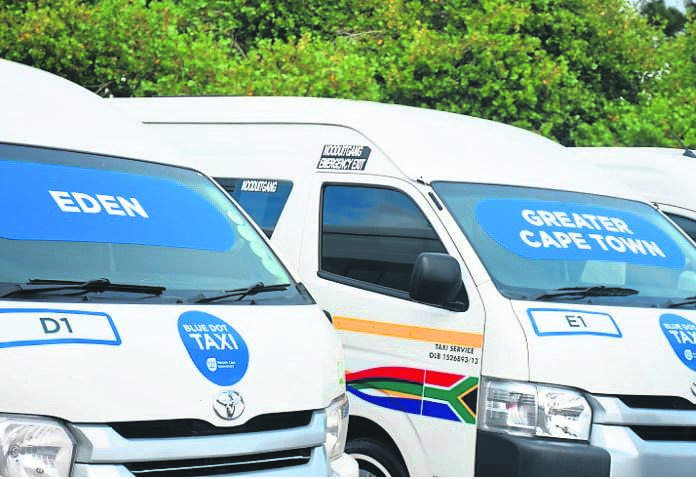 Each of the more than 700 minibus taxis in the Blue Dot Taxi Pilot Project recorded, on average, 26 daily speeding and harsh driving incidents.
Supplied

Each of the more than 700 minibus taxis participating in the Blue Dot Taxi Pilot Project in the Western Cape recorded, on average, 26 daily speeding and harsh driving incidents.

The data was collected during June to build up a baseline of driver behaviour. The project, run by the Western Cape Transport Department, rewards taxi drivers for improved driving and service with incentive payments. Launched on 15 May, the project will run for nine months.

We use this information to identify areas where participating taxis are performing well and where there is room for improvement, such as speeding, dangerous driving practices, overloading, poor customer service and poor adherence to Covid-19 safety requirements. We are also working hard to support participants to improve their driving behaviour through ongoing engagement and training.

The tracking units detected 5 000 speeding incidents among participating taxis, about half of which were serious, said Mitchell.

An average of 12 000 harsh driving (braking, acceleration, cornering) incidents per day were also detected in June.

"These figures provide a crucial baseline against which we can measure improvement. Through a combination of the financial incentives during the pilot, regular communication with participants and ongoing training and capacity building, we aim to improve performance over time."

The programme also allows for user feedback so that passengers and other road users can rate drivers.

More than half of these rated the service as very bad to bad, said Mitchell. The top three issues identified were dangerous driving, unsafe lane changes and unsafe stopping.

Of the more than 2 600 written comments received, 118 related to serious issues such as no mask-wearing, smoking in taxis, driving under the influence, harassment, assault and theft.

"Of course, when we receive feedback on serious incidents such as these, we take immediate action and, if the allegations are found to have merit, the relevant taxi will be removed from the project," said Mitchell.

In addition, field monitors were deployed at public transport interchanges across the Cape Town metro to monitor compliance with Covid-19 regulations. That resulted in a 91% compliance with mask-wearing by both drivers and passengers.

Lucky Sunday for 3 Daily Lotto players
Full list of lottery results
Lockdown For
DAYS
HRS
MINS
Voting Booth
Children between 12 and 17 can now be vaccinated against Covid-19. As a parent I am:
Please select an option Oops! Something went wrong, please try again later.
Relieved, it's been a long wait to this point
51% - 2860 votes
A bit hesitant, and will wait to see how it goes
21% - 1180 votes
Completely against my child getting the shot
29% - 1623 votes
Previous Results
Podcasts
PODCAST | My Only Story: Fiddling, sex jokes and flirting – another water polo coach exposed