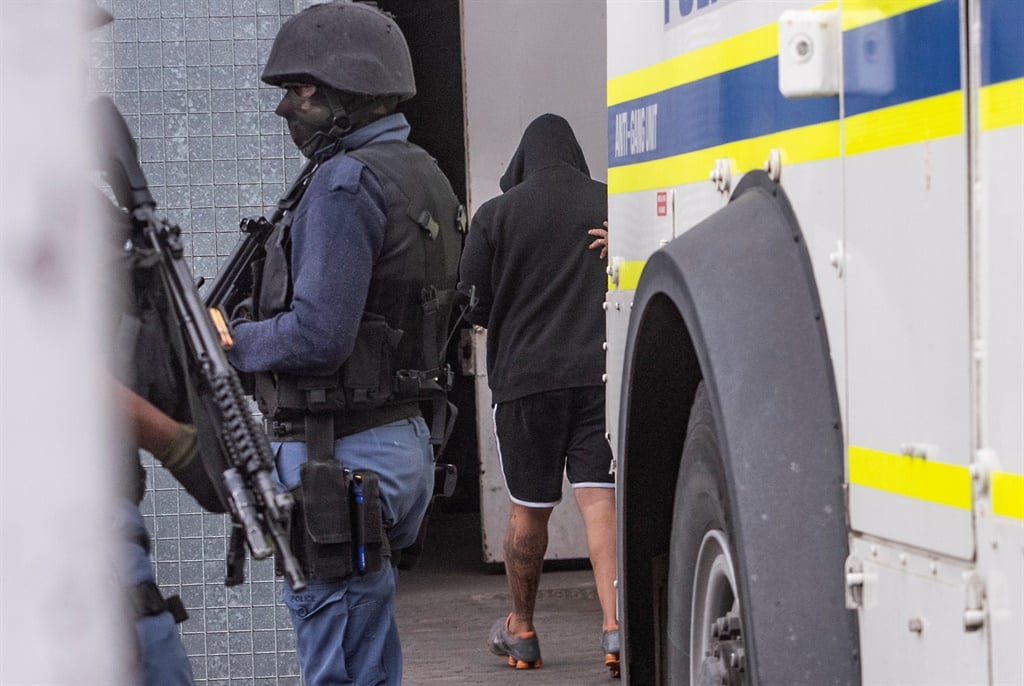 Kilian appeared in the Bishop Lavis Magistrate's Court on Monday under heavy protection by the Anti-Gang Unit and other police officers. (Brenton Geach, Gallo Images)

The lawyer for Zane Kilian is demanding the subpoena used to track the former rugby player's cellphone ahead of his arrest for the murder of Anti-Gang Unit detective Lieutenant-Colonel Charl Kinnear.

Kilian appeared in the Bishop Lavis Magistrate's Court on Monday under heavy protection by the Anti-Gang Unit and other police officers, some in civilian clothes with balaclavas to obscure their identity.

After some delays, and security so tight that the devices of all who entered the court were checked individually to see if they were off to avoid photographs being taken, Kilian finally emerged in the dock.

He stood throughout the short proceedings, his head tattoos still visible as his hair grows out.

The case against former rugby player Zane Kilian for the alleged murder of top police detective Charl Kinnear has been postponed to find a safer court for his bail application. | @itchybyte https://t.co/XI8tjj7Mgf

The court heard that Kilian's bail application would not be heard as expected, as it had been decided that there could be risks involved in conducting it in Bishop Lavis, where Kinnear was killed in his car on Friday, 18 September as he arrived home.

Kilian's lawyer Eckhard Rösemann objected vehemently to the delay, submitting that Kilian's Constitutional rights were being violated for not being able to bring the bail application.

He said his client had already been in custody for 15 days.

Kilian was arrested by police in Springs, Gauteng, on Monday, 21 September, and taken for questioning in Midrand. He was taken to Cape Town where he appeared in the Bishop Lavis Magistrate's Court on 25 September to face a charge of murder, conspiracy to commit murder, and illegal interception of communications.

He is alleged to have illegally intercepted Kinnear's phones from March to September.

Rösemann said that without the subpoena police had used to track Kilian's cellphone records before his arrest, all evidence will be "null and void". However, he will have to wait to make these submissions in full, as the case was postponed to 9 October for a court deemed safe enough to hear the case to be identified.

The court is situated on a busy corner in Bishop Lavis, with a lot of vehicle traffic and pedestrian movement in the vicinity.

One of the last judgments in a case in which Kinnear had testified related to the murder of a witness in the area. That witness had witnessed another murder.

On Monday at court, once the case had been postponed, attention moved to an armoured vehicle idling near the detainees' entrance, with armed and masked police officers holding the public and media at a distance, and police cars in a holding pattern in front and behind for the vehicle to start moving.

Zane Kilian departs from Bishop Lavis Magistrate's court with heavy police cover after the court postponed his bail application to find a safer venue for his case in which he is alleged to be implicated in the murder of Anti-Gang Unit detective Lt-Col Charl Kinnear (@itchybyte) pic.twitter.com/hiicTt8m4Z

People gathered opposite the entrance shouted: "Hulle protect die naai! [They are protecting this ****!]."

One woman shouted: "Look how they are just standing now. Shoot him!"

Kinnear was killed days after Police Minister Bheki Cele announced a special steering committee to investigate allegations that protection fees were being demanded of restaurants, coffee shops, and of late, some apartment blocks.

Questions have been raised over why Kinnear's protection at home was withdrawn earlier this year.

The police have not explained what the motive was.

Kinnear's funeral was held on Saturday.

We live in a world where facts and fiction get blurred
In times of uncertainty you need journalism you can trust. For only R75 per month, you have access to a world of in-depth analyses, investigative journalism, top opinions and a range of features. Journalism strengthens democracy. Invest in the future today.
Subscribe to News24
Related Links
Kinnear murder: Accused's case postponed to find safer court
WATCH | Funeral of late Lieutenant Colonel Charl Kinnear
WATCH | Charl Kinnear's murder is a 'tragedy with irreversible implications', WC police commissioner
Next on News24
LIVE | Covid-19 in SA: Death toll at 21 289, with 778 571 confirmed cases