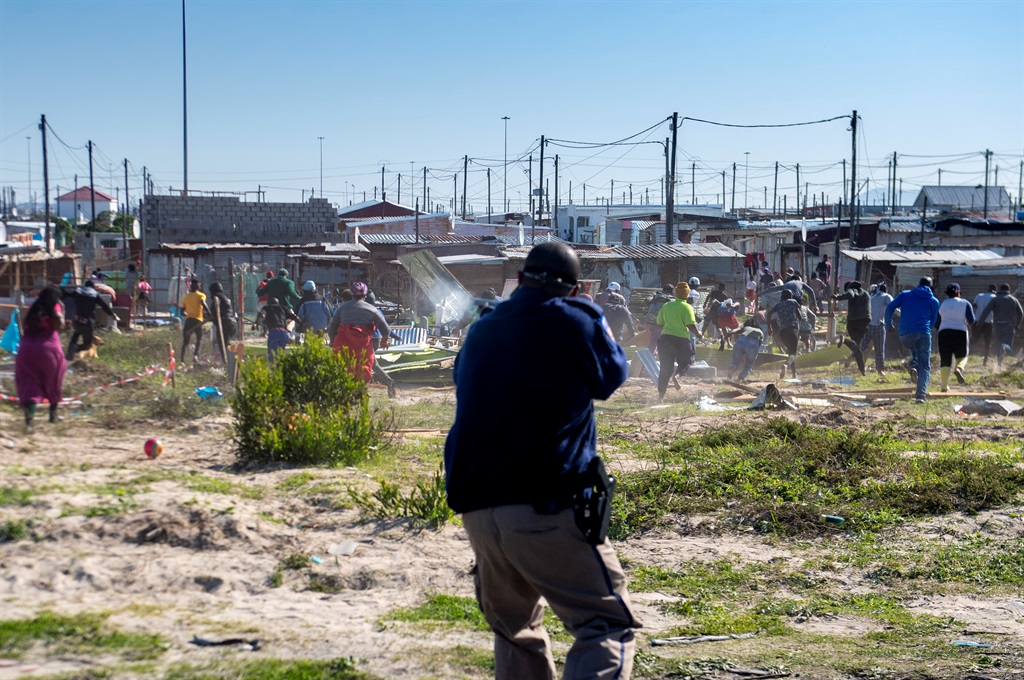 Members of the Metro Police clash with angry members of the Khayelitsha community over land invasions on July 21, 2020 after the City’s Anti-Land Invasion Unit, accompanied by law enforcement officers demolished informal structures at eThembeni near Empolweni in Khayelitsha. (File)
Photo by Gallo Images/Die Burger/Jaco Marais

Since March 2020, the City of Cape Town has witnessed 1 025 land invasion incidents costing the Western Cape province over R100 million.

Western Cape Member of Provincial Legislature Matlhodi Maseko said land invasions remain one of the greatest and costliest obstacles to the development of integrated, safe housing opportunities in the Western Cape.

Maseko said land invasions are a sustained problem within the City of Cape Town and in the Western Cape as a whole.

“Individuals and groups are often unaware when they invade land parcels that much of the land is not suitable for housing developments. Land parcels may be too small, lie on flood plains, or face other factors which make the development of housing opportunities not only impractical, but they also place residents and their homes at risk,” said Maseko.

Since March 2020, there has been an increase in the number of orchestrated land invasions across the province with the provincial department having to divert more than R54 million to the protection of land parcels in the last financial year.

“Thousands of housing opportunities are lost when resources are diverted away from housing developments, costing the most vulnerable their homes. Orchestrated land invasions are often used as a way to jump the queue on the Housing Demand Database with individuals hoping to force governments to place them ahead of other law-abiding beneficiaries who are often elderly, people living with disabilities, military veterans, or those that have been on the Demand Database for more than 15 years.

“The occupation of the Woodstock Hospital as well as the Helen Bowden property for the last four years are just some examples of illegal occupations. These are situated in prime locations and stand to offer not only homes, but access to social and economic opportunities near urban hubs,” Maseko said.

1 person bags the jackpot in the Daily Lotto
Full list of lottery results
Lockdown For
DAYS
HRS
MINS
Voting Booth
As South Africa faces down the third Covid-19 wave, how are you keeping your family safe ?
Please select an option Oops! Something went wrong, please try again later.
Staying at home, isolating and being careful
5% - 1140 votes
Sanitising and wearing masks when we go out
17% - 4367 votes
Going on as usual, we're not afraid of the virus
78% - 19642 votes
Previous Results
Podcasts
PODCAST | Too Many Enemies: Episode 1 - the assassination of billionaire Wandile Bozwana