City of Cape Town officials are seemingly nowhere near finding a solution for the refugees who have been temporarily housed at two sites.

Under the Refugee Act, the refugees are the mandate of the Department of Home Affairs. The Paint City site in Cape Town falls under the jurisdiction of national government while the City’s involvement is limited to environmental health monitoring.

In the latest saga, a group of refugees at the Paint City site in Bellville have been thrown out of the main camping site over internal friction between the groups.

According to the group that was kicked out, they have been victimised and abused by the other group believed to be influenced by its leader Jean-Pierre Balous, who is currently in jail.

The group consists of 20 men, 20 women and 62 children who say they have not been allowed to use the toilets at the facility and have been forced to look for water nearby.

City officials visited the area on Monday to try and resolve the issue.

One of the members of the group, Balon Kalula, said: "Inside where we were staying, the violence was a lot, we were not happy inside. The way they [the other group] treated us was terrible. They chased us out because they said the property belongs to them. They told us that we do not have the right to use water."

They say they have not been allowed to use the toilet and/or water for a week. 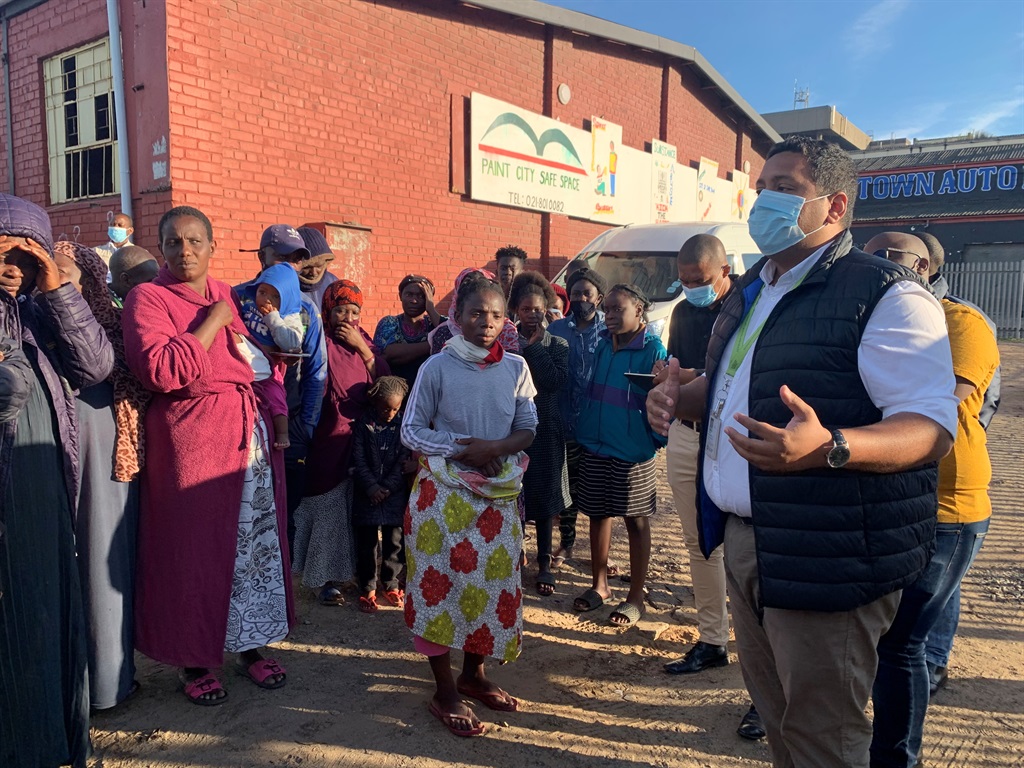 The main tent where refugees in Paint City Bellville are being housed.
News24 Marvin Charles

Another group member Kabanga Nariaye said they were not safe in the facility.

"We have no safety, they follow us around, and we are in danger," she said while carrying her 10-month-old child.

Around 600 refugees have lived at the Paint City temporary shelter for nine months after being removed from Greenmarket Square. The shelter was established under the Disaster Management Act regulations.

Currently, there are two proposals from Home Affairs: either the refugees are reintegrated into their communities or are repatriated.

#CTRefugeecrisis This is how refugees in Paint City Bellville are living currently. This group says they were forced out of the main tent set up by the department of public works. The group claims they have been subjected to violence. @TeamNews24 @News24 pic.twitter.com/zKAnCwiBUR

The issue has forced Parliament's Portfolio Committee on Home Affairs to intervene. But Home Affairs' plans has repeatedly been stalled due to the nationwide lockdown and the Disaster Management Act.

News24 has previously reported that the department was currently in talks with the Democratic Republic of Congo and Burundi to house the stranded refugees.

A woman who called herself Mama Mary, who is part of the other group in the main tent, said the refugees who were kicked out were not following the rules.

"They are lying to everyone. There is no violence here. They could not follow any of the rules we have. We are refusing to let them back in."

Mayoral committee member for community and health services Zahid Badroodien said: "I must find a solution to this [environmental health crisis]. We must be mindful of the fact that we have constant pressure from the area.

"We want a solution because we cannot have women and children sleeping outside. They cannot sleep outside, and they need to sleep inside the tent until we have a proper plan or reintegration."

Correction: In the original version of this article, it created an impression that the City of Cape Town was responsible for the refugees. This was not the case. The article has been changed to reflect this.

Do you want to know more about this topic? Sign up for one of News24's 33 newsletters to receive the information you want in your inbox. Special newsletters are available to subscribers.
We live in a world where facts and fiction get blurred
In times of uncertainty you need journalism you can trust. For 14 free days, you can have access to a world of in-depth analyses, investigative journalism, top opinions and a range of features. Journalism strengthens democracy. Invest in the future today. Thereafter you will be billed R75 per month. You can cancel anytime and if you cancel within 14 days you won't be billed.
Subscribe to News24
Next on News24
BREAKING NEWS LIVE | Teen arrested for allegedly raping aunt