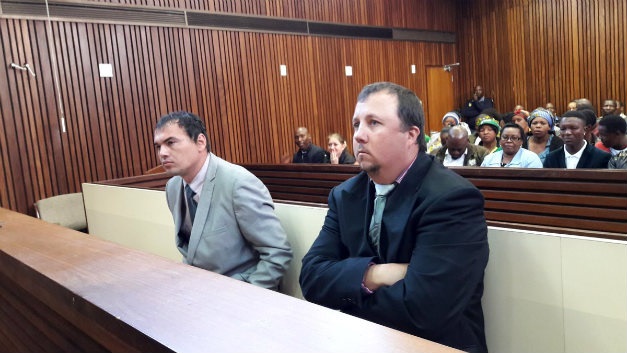 The Supreme Court of Appeal (SCA) has amended the conviction and sentence of Willem Oosthuizen and Theo Jackson - the pair involved in the so-called "coffin assault" case in 2016 - setting aside their attempted murder and intimidation convictions.

The pair were found guilty of assault with intent to do grievous bodily harm, kidnapping, attempted murder, intimidation and defeating the ends of justice in 2016 when a video surfaced of them forcing Victor Mlotshwa into a coffin after accusing him of trespassing and theft.

Mlotshwa said he was attacked by the two while hitch-hiking.

While both denied the charges at the time, Oosthuizen was sentenced to 11 years' imprisonment, and Jackson to 14 years.

According to court papers dated December 2, the SCA adjusted their sentences and conviction, finding the pair guilty of assault with intent to do grievous bodily harm and kidnapping, while Jackson maintains his convictions of defeating the ends of justice.

Both have subsequently been sentenced to five years imprisonment on the assault charges and one year for kidnapping, while Jackson received one year for defeating the ends of justice for burning the coffin which was to be used as evidence.

We live in a world where facts and fiction get blurred
In times of uncertainty you need journalism you can trust. For only R75 per month, you have access to a world of in-depth analyses, investigative journalism, top opinions and a range of features. Journalism strengthens democracy. Invest in the future today.
Subscribe to News24
Related Links
2 men convicted for coffin assault lose bid to be released on bail
Appeal Court judges grill lawyers representing coffin duo
Coffin assault case: Duo to appeal convictions and sentences
Next on News24
LIVE | SA to remain on Level 1, govt mulls mandatory vaccinations as 4th wave looms

Lucky Sunday for 3 Daily Lotto players
Full list of lottery results
Lockdown For
DAYS
HRS
MINS
Voting Booth
The EFF has voted with the DA to ensure they now govern Johannesburg, Tshwane and Ekurhuleni. Was this:
Please select an option Oops! Something went wrong, please try again later.
A brilliant strategic move by the DA not to make formal coalition agreements
24% - 1965 votes
A brilliant strategic move by the EFF to force the DA to negotiate with them
16% - 1326 votes
A recipe for disaster and five more years of unstable local government
60% - 4915 votes
Previous Results
Podcasts
PODCAST | The Story: New era in South African politics dawns - leaving ANC to lick its wounds