Come rain or shine: Fine and cool day for northern parts of SA, cold and rainy in the Cape Heavy rain leading to localised flooding is possible over the western parts of the Cape Winelands and Overberg districts in the Western Cape, the South African Weather Service warns.

Gale force (62-80km/h) north-westerly to westerly winds are expected along the coastal regions between Table Bay and Cape Agulhas on Saturday, spreading to Algoa Bay.

High seas with wave heights from six to nine metres are expected between Lamberts Bay and Plettenberg Bay, spreading to Cannon Rocks by the evening, subsiding by Sunday afternoon.

A storm surge is expected between Mossel Bay and Plettenberg on Saturday late afternoon into Sunday.

Extremely high fire danger conditions are expected in places in the Garden Route District Municipality in the Western Cape.

Gale force north-westerly winds of 62km/h with gusts of 85km/h are expected in Dr Beyers Naude Local Municipality in the Eastern Cape.

Gale force westerly winds of 65km/h with gusts of 90km/h are expected along the coast between Port Alfred and East London from Sunday morning.

Strong north-westerly winds (50-60km/h) are expected over Karoo Hoogland Municipality in the Northern Cape, including the Breede Valley, Central Karoo and Garden Route in the Western Cape, as well as over the interior of the Eastern Cape.

Very cold conditions are expected over the southern high ground of Namakwa (Karoo Hoogland) in the Northern Cape.

It will be fine and cool in Gauteng,

Mpumalanga will be fine and cold to cool but warm in the Lowveld.

Fine and cool to warm conditions can be expected in Limpopo.

It will be fine and cool in the North West.

The Free State will be fine and cold but cool in the north.

It will be fine in the north of the Northern Cape in the morning, otherwise cloudy to partly cloudy and cool, but cold and windy over the western and southern interior.

Isolated to scattered showers are expected in the south-west from evening.

The wind along the coast will be moderate north-westerly, fresh at times.

The Western Cape will be partly cloudy and cool in the east in the morning, otherwise cloudy and cold with widespread rain and showers in the west from midday where localised flooding is possible.

Scattered to isolated showers are expected to spread along the south coast and adjacent interior by evening.

It will be very windy across the province.

The western half of the Eastern Cape will be fine and cool becoming windy over the interior from late morning.

It will become cloudy from the west in the evening with scattered rain and showers along the coastal area.

The wind along the coast will be moderate to fresh north-westerly, becoming strong to gale force during the afternoon

In the eastern half, cloudy conditions with light rain is possible for the Wild Coast in the early morning, otherwise fine and cool but cold over the high lying areas, becoming windy in places over the interior from late morning.

The wind along the coast will be moderate north westerly, becoming strong west of East London, strong north easterly east of Kei Mouth.

Partly cloudy conditions over the east of KwaZulu-Natal can be expected in the morning, otherwise fine and cool but warm in the extreme north-east.

The wind along the coast will be moderate south-westerly, becoming north-easterly from the south in the afternoon. 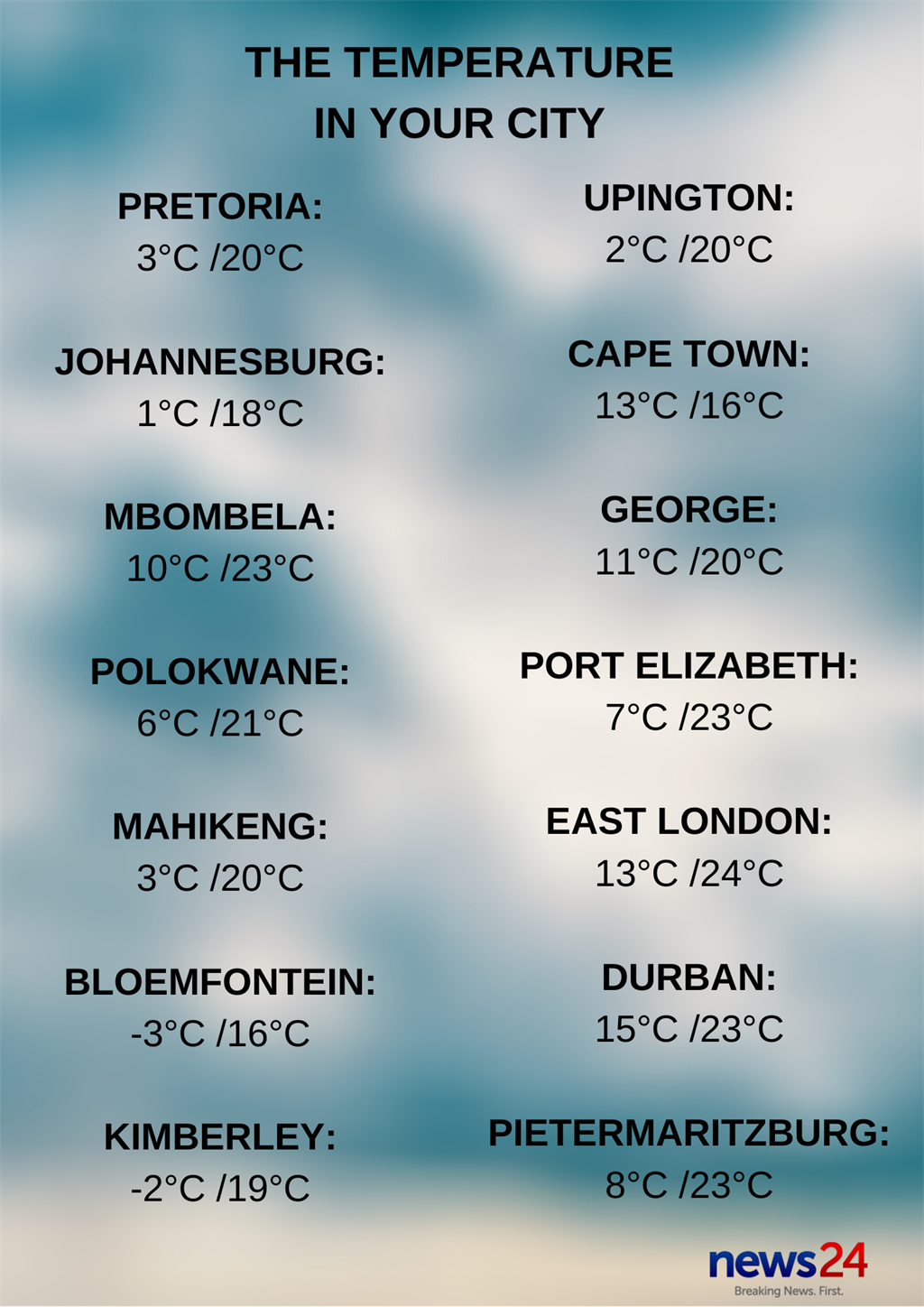 Sweet Saturday for 19 Daily Lotto players
Full list of lottery results
Lockdown For
DAYS
HRS
MINS
Voting Booth
Do you know what your baby's name means?
Please select an option Oops! Something went wrong, please try again later.
No, we just chose one we loved
43% - 1064 votes
Yes, we researched the meaning carefully
40% - 993 votes
Yes, it's a traditional family name
17% - 431 votes
Previous Results
Podcasts
PODCAST | THE STORY: How far has SA come after over four months of fighting a deadly virus?