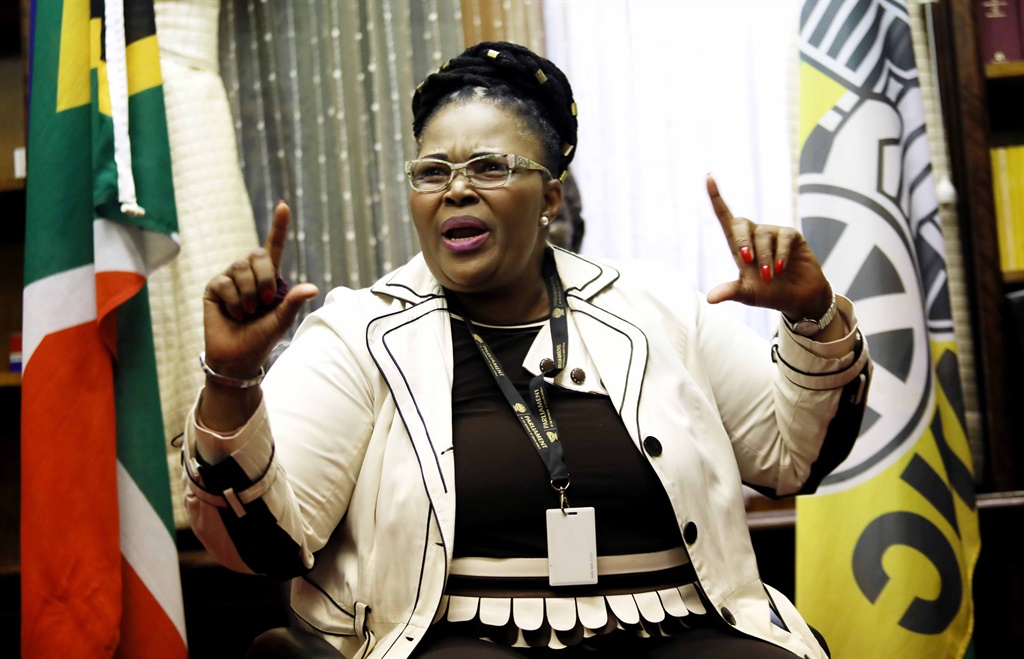 The ANC's parliamentary caucus has said it is deeply embarrassed by the "barbaric behaviour" of corruption related to Covid-19 national disaster funds.

This followed comments by President Cyril Ramaphosa, who said it was unconscionable that people may be using the Covid-19 crisis to unlawfully enrich themselves.

Ramaphosa, who made the remarks in a press statement on Saturday night, also announced that he had given support to law enforcement agencies to investigate all allegations of corruption in the awarding of tenders related to Covid-19.

This came as media reports revealed several companies that scored millions in contracts to provide services for the Gauteng health department, were allegedly run by relatives of ANC heavyweights.

In a statement issued late on Monday night, ANC chief whip Pemmy Majodina said the ANC caucus deeply regretted that despite repeated "harsh warnings" at the beginning of the Covid-19 pandemic by Ramaphosa for anti-corruption and clean governance in the use of funds aimed at combating Covid-19, "these warnings have not been heeded".

'This impunity must stop'

"Impunity seems to be [the] order [of the] day when the rate of infections is rising and essential workers continue to experience shortages within hospitals regarding availability of personal protection gear," Majodina said.

She said the ANC caucus found this "deplorable conduct unbecoming" in the wake of various reports in the media detailing a trail of alleged graft and corruption in various provinces, especially over the past two weeks.

READ | Adriaan Basson | Let's not pretend to be surprised by the ANC's tender corruption, please

"This impunity must stop. The brazen nature that has been characterised by massive irregularities and acts of misconduct continues to dent the name of the organisation and makes [a] mockery of all our commitments to fight corruption."

Majodina added that, at the recent tabling of the first debate on the Special Adjustment Appropriation Budget, Finance Minister Tito Mboweni also alluded to these disturbing reports.

Mboweni took to Twitter about the theft of funds a few days after Ramaphosa vowed "very, very severe consequences" for corruption with Covid-19 relief funds.

"The wrongs being done by unscrupulous thieves must be dealt with decisively. It is time that leadership led without fear, favour or prejudice. Watch the space," Mboweni tweeted.

Ramaphosa earlier said: "We have empowered our law enforcement to investigate all reports of alleged corruption and irregularities in the procurement of medical and other supplies. It is unconscionable that there are people who may be using this health crisis to unlawfully enrich themselves."

On 23 July, Ramaphosa signed a proclamation authorising the Special Investigating Unit to probe any state institutions accused of corruption during or related to Covid-19 national disaster funds.

"As the ANC caucus, we are deeply embarrassed by this barbaric behaviour and call on the fast-tracking of all these government-led initiatives to investigate and bring [perpetrators] to book immediately. Law enforcement agencies must work around the clock to stem the tide of these criminality," Majodina said on Monday.

She added that corruption was inimical to development and it constrained the ability of the ANC government to fight poverty, "especially during a ravaging pandemic such as Covid-19 and [it] negatively affects the economy and citizens".

Corruption damages the already weakened sense of trust and social compact between government and the people and must be uprooted.

"It is in this context that the ANC Parliamentary caucus fully supports and echoes the sentiments by Ramaphosa [in his] 'From the Desk of the President' newsletter released [on Monday]."

Ramaphosa wrote: "Attempting to profit from a disaster that is claiming the lives of our people every day is the action of scavengers. It is like a pack of hyenas circling wounded prey."

The ANC said it refused to "allow public funds hard-earned by loyal taxpayers" or donations by patriots within business, civil society and the international community to "vanish down a black hole of corruption".

"Like many South Africans, as ANC Members of Parliament we contributed to the coffers of the Solidarity Fund for the sole purpose of ensuring that the livelihoods of South Africans are taken care of during the Covid-19 pandemic.

"[The ANC] finds it highly unacceptable that some of these funds have not reached their intended recipients and have not served their purpose, thus leaving millions of our people in dire straits at a time when they are most vulnerable when a safety net has been created for them. We will closely monitor the developments of the cases under investigation and take decisive action against those involved in corruption and unsavoury conduct."

It urged public servants to desist from conduct that undermines the integrity of government and puts the governing party into disrepute.

"We commend the decision of government to set up measures and regulations to safeguard funds that are meant to assist South Africans from the impact of Covid-19. Critical institutions such as [the National Prosecuting Authority], SIU, Hawks, [South African Revenue Service] and [Independent Police Investigative Directorate] have been rebuilt and established to strengthen law enforcement, investigate and prosecute those responsible for all crimes, especially those related to the looting of Covid-19 relief funds.

"We are encouraged by the establishment of these institutions, hoping that those involved in corruption will be dealt with timeously and the funds recovered."

The ANC caucus said it would continue to "robustly play our oversight role" to ensure accountability and compliance with the regulations set by the government for procurement processes, including any expenditure using state resources.

Related Links
167 companies got tenders for Covid-19 work, R159m the highest amount paid - Gauteng health dept
The Dikos speak: 'PPE tender was an error of judgement'
Cyril Ramaphosa | Profiting from a pandemic is like a pack of hyenas circling wounded prey
Share
Next on News24
LIVE | Mosquito-transmitted illness may provide immunity against Covid-19, study says