A man with a mask seen on May 10, 2020 in Cape Town. (Photo by Nardus Engelbrecht/Gallo Images via Getty Images)

A new Ipsos/News24 poll has revealed the dire effects of the Covid-19 pandemic on many News24 readers' finances, with thousands resorting to dipping into their savings to make ends meet and reporting a severe impact on their financial positions.

The online survey covered 52 287 readers from across the country and was conducted from 25 May to 4 June.

More than four in 10 News24 readers said their finances had been severely affected by the Covid-19 pandemic, answering nine or 10 out of 10, on a scale of one to 10, when asked to indicate the severity of the Covid-19 influence on their personal finances.

"The findings are representative of South African adults with access to the internet – whether this access is at home, at work and/or on a mobile phone. This group represents about two-thirds of all adults in the country and covers all provinces, population groups, ages and people of different working status and incomes.

The findings suggest that the pandemic has taken a toll on the personal finances of readers, with just 5% of readers saying their finances had not been severely impacted at all. The survey's results come as Finance Minister Tito Mboweni is set to deliver a supplementary budget on Wednesday, with a yawning debt-to-GDP ratio expected to be announced.

In an increasingly confined fiscal space, Mboweni is expected to explain how he plans to reprioritise R130 billion from the existing budget, as mandated by President Cyril Ramaphosa in April. The money forms part of a R500 billion economic rescue package announced by the president.

On Tuesday, Statistics South Africa revealed that the country's official unemployment rate had breached the 30% mark - and, at 30.1%, was the highest it has been in a decade, Fin24 reported.

National Treasury reportedly expects between 690 000 and 1.8 million job losses this year, while the economy is expected to contract by up to as much as 10%.

The News24/Ipsos survey also revealed that: 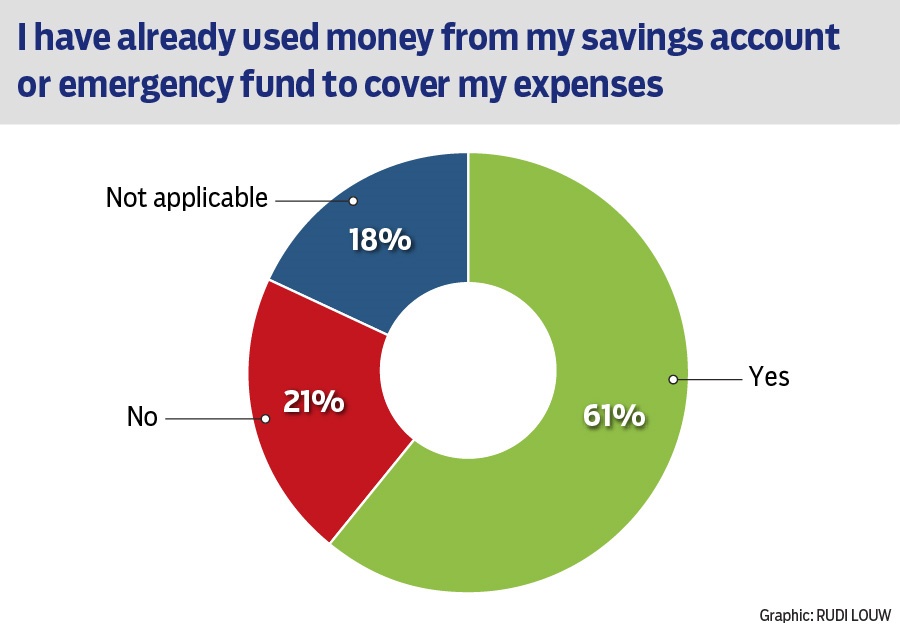 The financial impact of the pandemic on News24 readers showed a racial skewing, with black people seemingly more affected.

About 46% of black respondents said their finances had been severely impacted by Covid-19, or 9-10 on a scale of 1–10. On the other hand, about 35% of white people said the same thing.

More white respondents were concerned about the impact of the virus on their savings or retirement plans than black people.

Iraj Abedian, chief executive of Pan African Investment and Research Services, says that because South Africa's economy is largely still skewed along racial lines, this is to be expected.

Black people being more severely affected by the pandemic than white people, financially, is another by-product of the racially-skewed economy, said Abedian.

"White people have inherited wealth, and other investments, and have a much better wealth base to weather the storm. Whereas the black majority, even those who are middle class, who have built up savings over the last 20 or so years, stand to lose everything."

He said that the middle class, as well as the more financially better off black population, are "very, very vulnerable to impoverishment".

For example, he said that some investment portfolios have lost up to 40% since the pandemic hit South Africa.

"If you have built up a retirement fund of R1 million, that is a phenomenal loss if you are close to retirement," he said.

Of the 76% of participants who said they earned an income before the pandemic, many had lost part of their income, their job, or were forced to take unpaid leave. Harris said that the 14% who had lost their jobs would amount to about three million South Africans.

She said it was, therefore, "not surprising" that 55% of News24 readers thought the economy should be reopened, even if the virus was not fully contained. However, about two-thirds also said they would be nervous to leave their homes if businesses were allowed to reopen and travel allowed to resume. The rest opted not to make a choice. The News24 poll was conducted in partnership with Ipsos.

- Over 56 000 respondents were initially polled, and the figure was adjusted to account for only those living in SA, to reach a final figure of 52 287 participants.

- All participants were over the age of 18

We live in a world where facts and fiction get blurred
In times of uncertainty you need journalism you can trust. For only R75 per month, you have access to a world of in-depth analyses, investigative journalism, top opinions and a range of features. Journalism strengthens democracy. Invest in the future today.
Subscribe to News24
Related Links
Wandile Sihlobo | SA is bleeding jobs, but agriculture may just surprise us
Ramaphosa urges investment, entrepreneurship as Covid-19 eats into jobs
South African jobless rate swells to worst level in 10 years
Next on News24
LIVE | Covid-19 in SA: Vaccinations top 7 million as cases rise by 17 351