A shortage of nurses and doctors, coupled with the health sector's failure to have a coordinated response in the Eastern Cape, has ensured a tsunami wave is on its way, the dean of the Department of Health Sciences at the Nelson Mandela University, Professor Lungile Pepeta, has told News24.

Pepeta, a former head of the paediatric department and paediatric cardiology at the Port Elizabeth Hospital complex, said this as the metro prepared to introduce a new 3 300-bed field hospital in Nelson Mandela Bay.

"The number of ICU (intensive care unit) beds is very low; we don't have a lot of ICU beds. I think the estimate was around 70 for the province, but here in the Bay, we have 34 ICU beds. This includes private and public spaces. That is a concern because already we have high levels of cases," he said.

Pepeta says, as it stands, the ICU units at both private and public hospitals in Nelson Mandela Bay are already "full to capacity".

As of 21 June, the province had registered 15 751 infections. Of this number, 8 035 people had recovered, with 285 deaths, the premier's office said in statement.

He told News24 that, in the metro alone, there will likely be a doubling from the 4 706 cases recorded on Saturday to over 9 000 within the next 10 days.

"Then we'll have about 100 people requiring beds. What are we going to do about that when our bed capacity is sitting at 34? The total numbers that are going to be in that field hospital is approaching 4 000; my concern is the issue of the human resources that needs to be in that hospital looking after the patients," he said. He said the shortage of frontline workers, primarily nurses, because of shortages in personal protective equipment (PPE), infections, skills and self-isolation were creating an even bigger problem in the province.

"The situation for the Eastern Cape is about to get worse. We just don't have enough staff and enough people to deal with this. The virus is spreading like fire when we are resource constrained. We now need to consolidate to come up with plans. We need to operationalise whatever we do on a day-to-day basis, and I don't see that plan," he adds.

Part of the provincial government's response to the pandemic is putting in place sustainable solutions by investing in the health services, facilities and sustainable infrastructure, the statement reads. 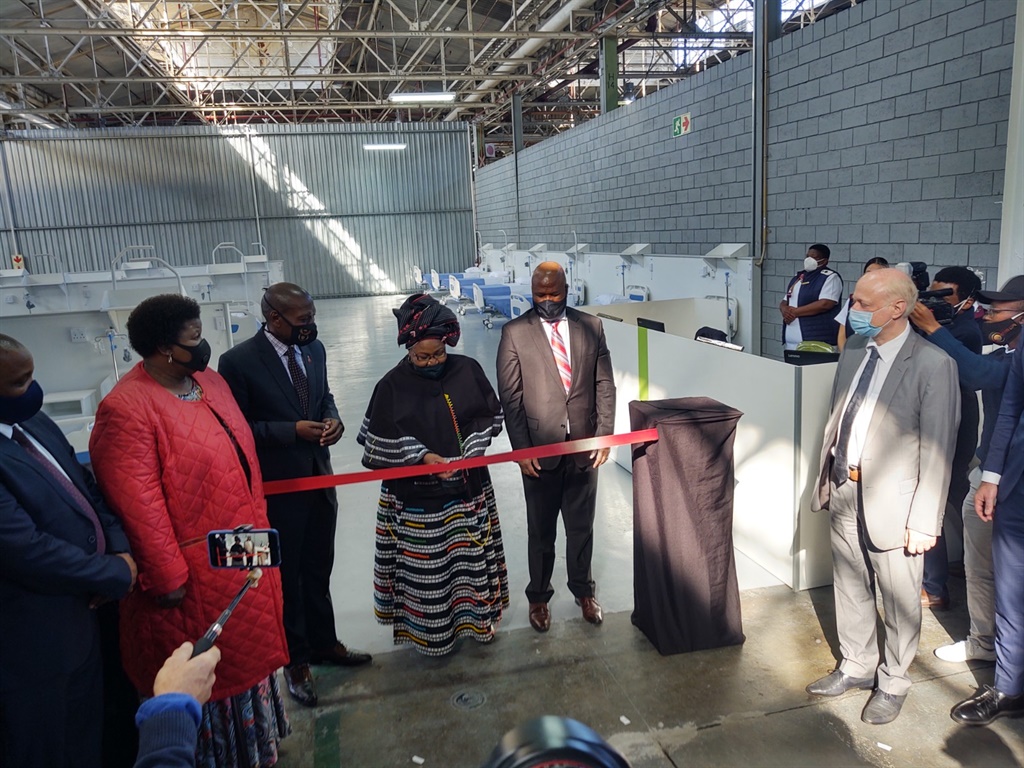 "We are not involving the general practitioners in terms of saying, how can they come in and assist in managing this? I don't see a concerted effort at the health level. I don't see the Department of Health talking a lot to the private hospitals. I don't see unity from private healthcare either. I don't see us sitting in one meeting to say, Livingstone Hospital what's your challenge?

"I want to see a concerted effort, where we are sitting and saying this is what we have and this is what we need, and then have a central port where we say this is the depot for PPEs and how we are going to manage the depot or stores. One hospital is forever running out of PPEs, so why don't we share how we manage PPE stock for instance."

He adds that he has seen private hospitals on "divert mode", turning away people with medical insurance due to bed shortages.

"My other idea is to get my senior nursing students to say, if we provide them with PPEs, they are safe, and we train them and they can work. What we can't do is to take retired nurses and doctors and put them in hospitals because they are high risk. Let us take rather the young ones that are energetic, and look at low-risk areas and high-risk areas and place them there with adequate PPE."

In his acceptance speech of the field hospital donated by VW South Africa on Tuesday, Mabuyane said it neatly dovetailed into the government's broader strategy of establishing field hospitals to fight Covid-19 in the Eastern Cape.

Mabuyane said the province was looking for more beds to increase its capacity.

"The issue about these hospitals is not an issue of saying we don't have ventilators only, it's an issue of who will look after the patients. You can have all these beautiful things, but whatever facility you are building will be a white elephant if there is no one to work there. I have not heard a plan around that. Those are the things that this committee should be discussing.

"I don't see any plans that say the province is asking for money from the solidarity fund, neither am I hearing if we have money as well to support this agenda. As long as we don't have a platform, these will forever be the questions that will not be answered, and forever be speculated," Pepeta said.

We live in a world where facts and fiction get blurred
In times of uncertainty you need journalism you can trust. For 14 free days, you can have access to a world of in-depth analyses, investigative journalism, top opinions and a range of features. Journalism strengthens democracy. Invest in the future today. Thereafter you will be billed R75 per month. You can cancel anytime and if you cancel within 14 days you won't be billed.
Subscribe to News24
Related Links
PICS | Mkhize, VW open Covid-19 field hospital with 3 300 beds in Eastern Cape
Health workers sound alarm bells as virus spirals
Eastern Cape health dept turns convent into quarantine site as fifth nun dies
Next on News24
BREAKING NEWS LIVE | Opposition parties will apply for motion of no confidence against Ramaphosa for Phala Phala farm debacle