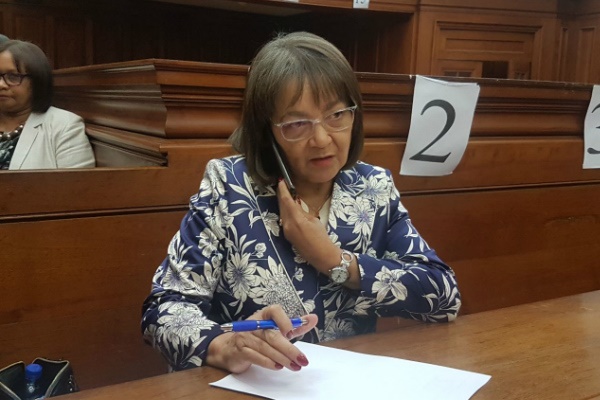 The Gauteng High Court in Johannesburg has reserved judgment in a matter between the Electoral Commission of South Africa (IEC) and the DA.

The DA was appealing the IEC's findings that the party breached the electoral code when it said De Lille had been fired.

This is the latest development in an ongoing legal tussle between De Lille, the newly appointed Minister of Public Works and Infrastructure, and her former party.

Roger Solomons, a media aid who accompanied De Lille to court, confirmed the outcome and added that the "judges are applying their mind" and that they "will rule and notify us".

Speaking to the media after proceedings were adjourned on Monday, De Lille said: "I will insist that the DA are blue liars, that if they've got any evidence that they've ever fired me through a due process, they must come with that evidence.

"The whole country knows, for the past two years, they've been trying to smear my name, coming with false allegations. I've won three court cases against them, this is just a continuation of that fight."

In April, De Lille complained to the IEC about the DA's telemarketing, alleging that the script that call centre personnel used stated that she had been fired and was guilty of wrongdoing.

When canvassers are asked about infighting and De Lille, they are allegedly asked to respond: "We fired Patricia de Lille because she was involved in all sorts of wrongdoing in the City of Cape Town. The DA doesn't allow corruption and will take action against anyone, even our own members."

De Lille announced that she was leaving the DA on October 31 last year – the same day she resigned as mayor of Cape Town as per agreement with the party after months of acrimony. She later founded the Good party.

The IEC found that the DA had made a "manifestly false statement" by saying that De Lille had been fired, and was therefore in contravention of the electoral code.

The matter between IEC vs DA in motion at the Johannesburg High Court. The DA is here to appeal the IEC findings that the blue liars breached electoral code when they said they had fired @PatriciaDeLille and to challenge power of the IEC to order them to apologize @ForGoodZA pic.twitter.com/87rNvpj5bs

The DA applied to the Electoral Court to review the ruling.

News24 previously reported that Judge Robert Martin of the Western Cape High Court upheld the IEC's ruling that the DA was untruthful in its telemarketing material when it said that it had fired De Lille.

We live in a world where facts and fiction get blurred
In times of uncertainty you need journalism you can trust. For only R75 per month, you have access to a world of in-depth analyses, investigative journalism, top opinions and a range of features. Journalism strengthens democracy. Invest in the future today.
Subscribe to News24
Related Links
Maimane says De Lille telemarketing case will end up at Electoral Court
IEC orders DA to apologise to De Lille in telemarketing complaint
'DA a bunch of blue liars' - Patricia de Lille on postponement of IEC telemarketing case
Next on News24
LIVE | Covid-19 in SA: Death toll rises by 71 as cases hit 1 599 272