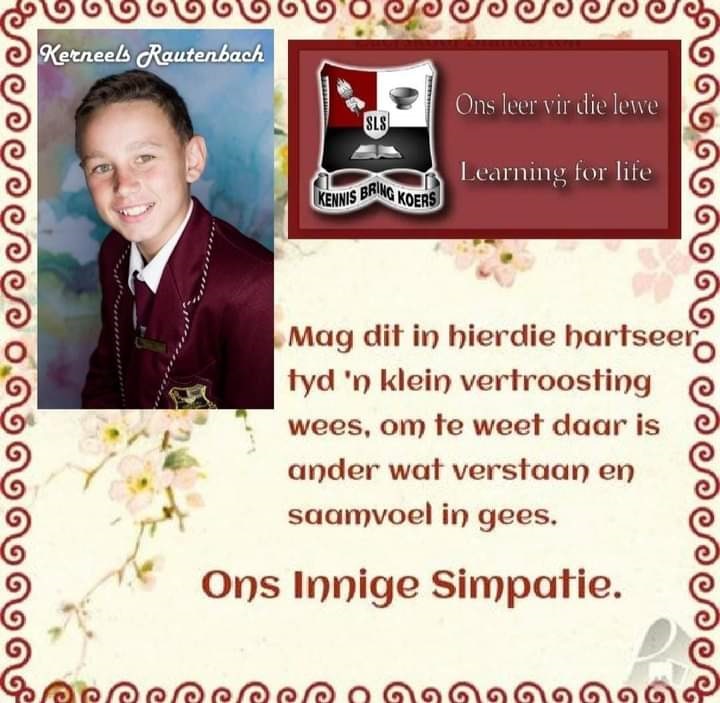 Kerneels died after falling inside a maize silo on a farm in Mpumalanga.
Supplied

Agri SA has warned the farming community in South Africa to be extra vigilant about their own safety while on farms.

This after a young woman and her nephew died after falling into a maize silo in Mpumalanga on Friday, and a man was gored to death by a buffalo in Limpopo on Thursday.

Agri SA said it was "deeply shocked" by the tragic incidents that affected the farming communities in the two provinces.

These incidents are very tragic indeed. It's important to know that farms are high-risk areas with all kinds of animals, including wildlife, roaming on the farms.

"Precaution must always be taken to minimise injuries. Farms are also loaded with tractors, combine harvesters and maize silos and other equipment that cause injuries and even fatalities if people are not cautious when operating this equipment or even if they work in close vicinity."

He said people should not take safety on the farm lightly as "vigilance is key" to staying safe. "Our heartfelt condolences are sent to the families of the deceased, this is a very sad time for them and we remember them in this difficult period in which they now find themselves in," added Van der Rheede.

Davel added the agricultural sector must comply with safety standards in accordance with legislation.

Mpumalanga and Limpopo police are investigating following the tragedies.

The Standerton police station is probing the deaths of the Standerton woman, Jackie Rautenbach, 33, and her nephew, Kerneels Rautenbach, 12, who died after falling into the maize silo on Friday.

The 12-year-old fell into the silo and his aunt tried to pull him out but also fell in.

"The woman's husband, who was a few metres away, is said to have heard loud screams for help and rushed closer to the scene but it was sadly too late to save their lives. On the arrival of the paramedics, the two were unfortunately certified dead," said police spokesperson Brigadier Selvy Mohlala.

Paramedics arrived and declared both dead.

An inquest docket has since been opened but police pointed out no foul play was suspected.

Kerneels attended Laerskool Standerton and the school paid tribute to him and his aunt on its Facebook page.

"Our hearts are hurting, our words are few. Kerneels Rautenbach, in your short time with us on earth, you have touched many hearts. You will always be remembered for the beautiful boy with the most beautiful heart. Our Stannies are going to miss you. Rest in Peace Kerneels. Heartfelt sympathy and condolences to the Rautenbach family," the school posted.

About Jackie, the school said: "Our Stannies convey our heartfelt condolences to the Rautenbach family, with the passing of Jackie Rautenbach. Jackie was a mom to one of our Grade 5 learners. Rest in Peace Jackie. You were so brave."

In Limpopo, a buffalo attacked and killed a 50-year-old man on Steenbokpan farm while the farm owner had to climb a tree to avoid the animal.

Police spokesperson Lieutenant-Colonel Mamphaswa Seabi said De Bruyn was with the farm owner and a photographer when the buffalo attacked.

"Although the farm owner tried to rescue him by firing some shots at the buffalo, subsequently the buffalo chased and attacked him as well."

De Bruyn was declared dead on the scene while the owner managed to escape serious injuries after climbing a tree. The photographer also managed to keep a safe distance.

The owner was taken to the hospital for medical treatment.

Provincial police commissioner Lieutenant-General Thembi Hadebe called on the farming community, farmers and tourists, in particular, to be extra cautious around animals.