UPDATE: This article will be updated with the latest 'fake articles' and other hoaxes come to light. News24's special coronavirus news hub has all the latest, confirmed news about the pandemic. Find it here or download our new News24 app for Android and iOS for the latest updates.

It is now a crime to intentionally share fake news about coronavirus.

As the novel coronavirus continues to spread around the globe, so does misinformation, fear, fake cures, fake news and malicious hoaxes. Here we debunk that news:

A manipulated News24 video was circulating on social media on April 6 where the president claimed to extend the lockdown. This video clip (below) is fake.

FAKE | A video is being circulated on social media allegedly showing President Cyril Ramaphosa 'extending' the lockdown. The clip was created by manipulating an old News24 video. This video clip is fake. pic.twitter.com/OHknXvTDV9

No, government is not recording your phone calls or stalking you on social media

A WhatsApp message claiming that "new communication regulations" would allow government to record people's phone calls, monitor their WhatsApp, Facebook and Twitter accounts, and that people forwarding religious or political messages would be arrested without a warrant has been doing the rounds.

A quick Google search revealed that the message is false and has been doing the rounds on social media as far back as 2017. It first appeared in India as a message from the "Ministry of Internal Regulation" - a ministry that does not exist in that country - and has resurfaced as the novel coronavirus continues to cause panic and fear.

No, you don't need a permit to go to shops

WhatsApp groups and other social media are inundated with false information and fear mongering. One such is that members of the public must fill in a permit before they will be permitted to visit shops, pharmacies or for "physical activity", among other "reasons" for leaving their homes.

This document is fake, and it is not a requirement to leave your home to acquire basic goods, Chrispin Phiri, spokesperson of the Government Communication and Information System, confirmed to News24. While Police Minister Bheki Cele warned of consequences for those who attempt to leave their homes - unless for essential purposes, such as buying groceries, seeking medical attention, collecting grants, buying medication, or emergencies - a permit to do so is not required.

A Facebook post claiming that hand sanitiser is harmful to pets is equally fake. "Please do not pet your dog or any pet after using hand sanitiser. It contains ethanol glycol that’s also found in anti-freeze that’s toxic to them! (sic)" the post claims.

Africa Check has dismissed this.

One of the most recent messages claims to be yet another study from the Medical University of Vienna, and reports that the university’s researchers, having studied the Covid-19 mortality rate in Italy, have found a link between patients taking Advil, ibuprofen, Mypaid, or Myprodol to control fever and getting sick.

Minister of Small Business Development Khumbudzo Ntshavheni has slammed a document claiming that government will only give funding to companies who are at least 51% black owned.

The health department has dismissed claims that Health Minister Zweli Mkhize had barred landlords from collecting rent money from their tenants for the next 90 days. The letter, with the department's letterhead, made the rounds on social media.

It claimed that the health minister had gazetted the regulations to deal with the spread of the novel coronavirus.

Here are some of the older fake news stories that were doing the rounds at the start of the coronavirus pandemic:

South Africa’s largest e-hailing service, Uber, has not suspended services between 19:00 and 06:00 due to coronavirus. A viral message, purportedly from Uber, widely shared on WhatsApp and other social media channels over the past 24 hours, claimed that Uber services have been suspended during the evenings following Ramaphosa’s announcement that a state of disaster had been declared.

No, a helicopter is not going to fly around South Africa spraying chemicals to stop the virus.

Netcare has urged members of the public to be vigilant of criminals pretending to be officials under the guise of conducting Covid-19 home screenings."Please note that staff members from the Netcare Group, including from Netcare hospitals, Netcare 911 or Medicross medical and dental centres, are NOT doing door-to-door Covid-19 screenings," Netcare said in a statement on Monday.

The South African Reserve Bank (SARB) has warned the public about fake officials who go around collecting cash "contaminated" with the novel coronavirus from unsuspecting people.The SARB says it is not withdrawing banknotes and coins because of the pandemic.

Update: While the below memo is definitely fake, President Cyril Ramaphosa has subsequently announced that schools will be closed from Wednesday, 18 March until after the Easter weekend.

A fake memo from the Basic Education Department has been doing the rounds on social media, claiming that all schools will be shutdown from Monday, 16 March. The Department of Basic Education distanced itself from this 'fake circular'. Two fake 'News24' articles are being circulated on social media. The first claimed there was a second confirmed case of the coronavirus in Mooi Rivier, Potchefstroom.

Members of the public informed News24 about the message and wanted to establish the article's veracity.

A screengrab displays a headline that claims: "SA's second positive case of the Convid-19 confirmed in Mooi River, Potchefstroom (sic)".

News24's logo and one of its journalist's names were used to pass it off as legitimate.

However, instead of Covid-19, the name of the disease was incorrectly reflected in the headline as "Convid-19".

The body of the article reflected in the screengrab also referred to a "first case" and it appeared that the person who altered the headline used a previous News24 article about the first case in KwaZulu-Natal. Rest assured, this story is fake.

Please do not share this false message and alert anyone who sends it to you.

READ | Coronavirus testing in SA: How it works, where to go, and what it costs

A second fake 'News24' article screenshot has started doing the rounds claiming that two Dainfern College students in Fourways, Johannesburg have tested positive. In the fake photo-shopped screengrab, students and families are advised to 'stay in self-quarantine for 14 days'. 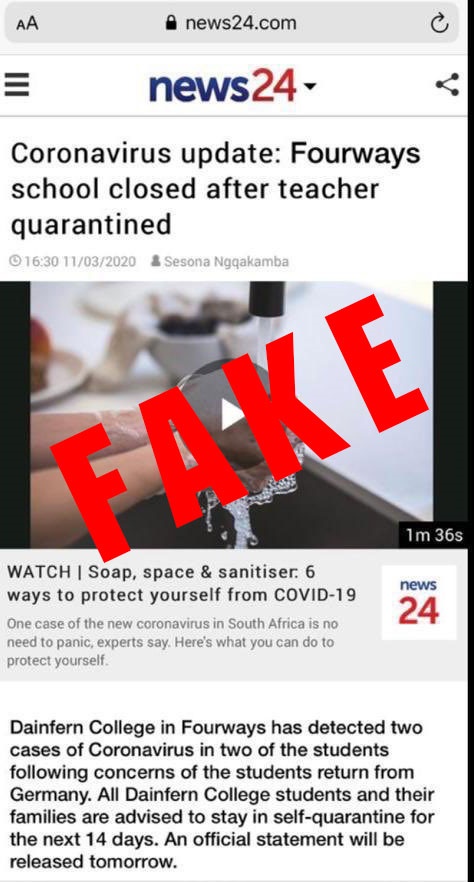 The screenshot was taken off a News24 article about a Sandton school that was closed after the teacher was quarantined. However, 'Sandton' was edited out and replaced by Fourways. The body of the article was edited out and fake wording inserted.

READ | How to clean your home to prevent coronavirus spread

"We've seen everything - if you can think of a plant or a medicine, there is probably a message online saying it can cure or prevent Covid-19. Lately, we debunked a message saying garlic taken in large quantities can help prevent the virus or cure it. There is no evidence that this is true."

READ | So you think you have the coronavirus - what now?

According to Wilkinson, there have also been a number of "scary messages" about drinking or using bleach products to combat the virus.

"This is not going to help. In fact, consuming bleach products can be incredibly harmful and make you very sick and could in some cases, even lead to death."

No cure as yet

While Africa Check has seen a lot of false information about vaccines and cures for Covid-19, none of these exist.

"Earlier this year, we saw a news article that went viral and got a lot of traction about a 'vaccine' that had supposedly been developed and tested at a university in Ghana, but that turned out to be a completely false story."

Wilkinson had the following advice: "If you see any information about cures or vaccines, first check the World Health Organization's website where they have a section dedicated to SARS-CoV-2 with all the latest information.

"They also have a great section where they debunk false information and hoaxes."

Even though the new coronavirus can stay on surfaces for a few hours or up to several days (depending on the type of surface), it is very unlikely that the virus will persist on a surface after it has been moved, travelled, and exposed to different conditions and temperatures. If you think a surface may be contaminated, use a disinfectant to clean it. After touching it, use an alcohol-based rub to clean your hands or wash them with soap and water.

Can pets at home spread the virus?

At present, there is no evidence that companion animals/pets such as dogs or cats can be infected with the new coronavirus. However, it is always a good idea to wash your hands with soap and water after contact with pets. This protects you against various common bacteria, such as E.coli and Salmonella, that can pass between pets and humans.

For more on debunking fake news and hoaxes, visit the WHO myth-busting site.

We live in a world where facts and fiction get blurred
In times of uncertainty you need journalism you can trust. For 14 free days, you can have access to a world of in-depth analyses, investigative journalism, top opinions and a range of features. Journalism strengthens democracy. Invest in the future today. Thereafter you will be billed R75 per month. You can cancel anytime and if you cancel within 14 days you won't be billed.
Subscribe to News24
Related Links
Coronavirus testing in SA: How it works, where to go, and what it costs
So you think you have the coronavirus - what now?
Coronavirus: National state of disaster takes effect with publishing of gazetted regulations
Next on News24
BREAKING NEWS LIVE | Two men arrested with explosives near SA-Zimbabwe border