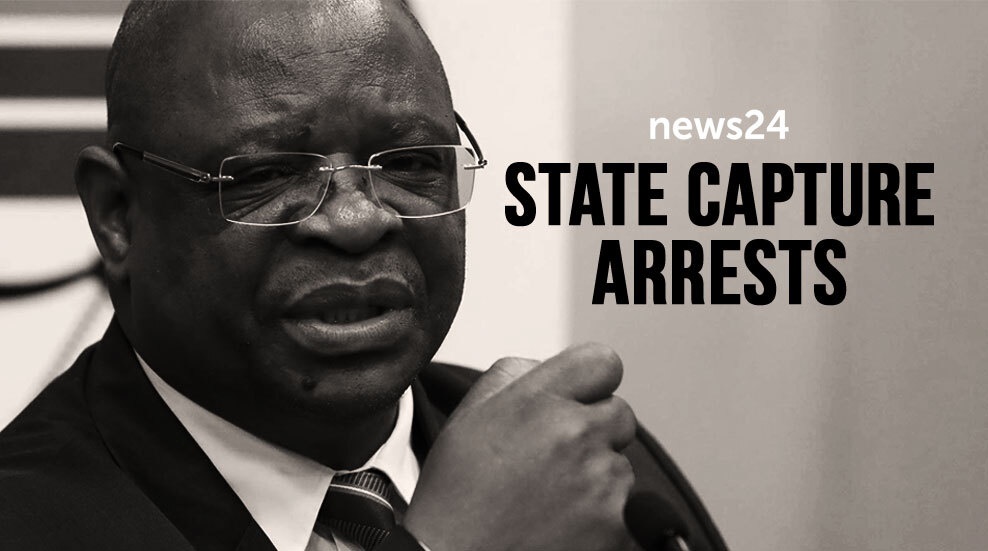 The Hawks made a number of arrests on Wednesday in relation to the infamous Free State asbestos deal. On Thursday, a seventh suspect handed himself over to authorities.
News24

After a day of a multidisciplinary arrest blitz by the Hawks on Wednesday, six of the seven identified suspects were arrested.

The Hawks were unable to find the seventh suspect at his office in Richards Bay on Wednesday.

On Thursday, he handed himself over to police, according to the NPA.

According to NPA spokesperson Sipho Ngwema, the seventh suspect in the Hawks' three-province wide swoop of alleged masterminds in the Free State asbestos audit scandal "handed himself over at midday in Durban".

The Hawks were unable to find the suspect at his office in Richards Bay on Wednesday.

Hawks officials in Durban have told News24 the suspect is being transported to Bloemfontein, where he is expected to appear alongside the other suspects tomorrow.

It signals the last of this round of arrests as the Hawks, together with the Special Investigating Unit (SIU) nabbed six of the seven suspects on Wednesday in Gauteng and the Free State in relation to the R255m corruption case.

A searing, 39-page indictment by the head of the National Prosecuting Authority's Investigating Directorate (ID), advocate Hermione Cronje, has laid bare the State's case against Smith and his co-accused, Angelo Agrizzi.

According to the investigating directorate, Smith - who is charged alongside Angelo Agrizzi, former Bosasa COO, who did not appear in court for medical reasons - stands accused of accepting gratifications in the form of security upgrades to his home and cash transferred into his personal bank account via the bank account of his company, Euroblitz (Pty) Ltd, in exchange for the use of his political influence as a Member of Parliament for the ruling party, to shield Bosasa from accountability for corrupting officials in the Department of Correctional Services who awarded Bosasa contracts worth billions of rands.

Smith is charged in his personal capacity as well as in his capacity as sole director and shareholder of Euroblitz.

According to investigating directorate spokesperson Sindisiwe Twala, the three accused have been charged with contravening section 7 of the Prevention and Combating of Corrupt Activities Act 12 of 2004 (PRECCA) and Smith alone was charged with fraud.

"Smith’s fraud charge emanates from his failure to disclose to the registrar of parliamentary members’ interests the gratifications that he received from Bosasa, pursuant to the corrupt activities with which he, Euroblitz and Agrizzi are charged," the statement, bearing Twala’s name read.

What’s more, charges emanating from a related investigation into the tax affairs of Smith and Euroblitz will be enrolled separately.

In an affidavit read out in court, Senior ANC politician Vincent Smith maintained his innocence and denied the fraud and corruption charges against him "in the strongest terms".

Smith argued that he should be released on R20 000 bail, but the State countered that the amounts involved in the alleged crimes warranted that bail be set at R30 000.

While former Bosasa operations chief Angelo Agrizzi was charged alongside Smith, he did not appear in court, citing poor health. His legal team handed the State a doctor's letter. #BosasaArrests The state suggests bail of R30 000 but Smith asks for R20 000. Magistrate agrees to release him on R30 000 bail. Smith is to hand over his passport before tonight along with other conditions of his bail @TeamNews24

Smith appeared in the Palm Ridge Magistrate's Court on Thursday and was granted R30 000 bail.

His next appearance 14 October.

#BosasaArrests Smith said he has no knowledge of any allegatory material. "My release on bail will not disturb the public or undermine [investigations]... It will be in the interests of justice to release me on bail" he says (@azarrahk)

#BosasaArrests Smith maintains his innocence, saying he is determined to stand trial and prove his innocence. Adds that the state will not be able to provide any objective facts that he tried to influence anyone (@azarrahk)

#BosasaArrests Smith is being charged with a schedule 5 offence. He tells the court that he has no other court case pending against him and this is his first time in court. He is being read his rights at the moment @TeamNews24 pic.twitter.com/9Xk7aGdK3b

Smith handed himself into the police and is due to appear in the Palm Ridge Magistrates Court.

Hawks spokesperson Hangwani Mulaudzi confirmed to News24 that six suspects have now been arrested as part of their operation on the Free State asbestos case.

The Hawks were looking to net seven in total.

Mulaudzi said the operation was launched simultaneously in three provinces, Gauteng, Free State and KwaZulu-Natal and it is believed that the outstanding suspect is based in KwaZulu-Natal.

Earlier, Mulaudzi urged the suspects not to flee, saying it would make matters worse for them.

Special Investigating Unit (SIU) spokesperson Kaizer Kganyago said on Wednesday that when SIU investigators uncovered the high levels of criminality involved in the asbestos audit tender scandal, they decided it was necessary to "rope in" the Hawks.

Kganyago was speaking to the SABC outside the offices of Blackhead Consulting, the controversial company owned by businessman Edwin Sodi where the Hawks were carrying out a search and seizure operation.

Kganyago said the search and seizure was in aid of obtaining further information that could assist the ongoing investigation.

"This investigation started a long time ago…in 2019," he said.

"When we started seeing a lot of criminality was involved, we roped in the Hawks and the NPA to work with us so we can get to the bottom of this matter, and that is what brought us to where we are today," he explained.

The SIU investigates cases based on proclamations signed and gazetted by the president.

President Cyril Ramaphosa signed the proclamation for the investigation into the affairs of the Free State Human Settlements Department and the asbestos audit tender in June 2019, and it was gazetted the following month.

Kganyago said the arrests and charges were not based on testimony by Sodi and others in the past days before the Zondo Commission into state capture.

He told the SABC that if any information provided to Zondo proved relevant, it would be added to the charges at a later stage.

Hawks spokesperson Hangwani Mulaudzi told the SABC earlier on Wednesday that the suspects arrested in ongoing operations in connection with the asbestos audit contract would face "a myriad" of charges in court.

He briefly described the charges as money laundering, fraud, theft, corruption and violations of the Public Finance Management Act.

ID head Adv Hermione Cronje promised the first big state capture arrest would come in September. Today is the last day of September. So there it is... several arrests by the Hawks underway this morning.

The Hawks have been at a business premises since 10am searching for the suspect. He's alleged to have siphoned money in the Asbestos eradication tender. He previously denied this at the #StateCapture commission. His colleagues say they have no idea of his whereabouts @Newzroom405 pic.twitter.com/M2XVVJwfkc

Hawks spokesperson Brigadier Hangwani Mulaudzi confirmed to News24 that five out of seven suspects were in custody.

He urged the remaining two suspects to cooperate and not attempt to flee, as this would make matters worse for them.

It is believed one suspect in KZN and another in Gauteng are yet to be apprehended. Mulaudzi said the operation was launched simultaneously in three provinces, Gauteng, Free State and KwaZulu-Natal.

Search and seizure operarions are underway at two locations in Gauteng and the Free State, Mulaudzi said.

Hawks spokesperson Hangwani Mulaudzi told ENCA earlier on Wednesday that the operation was taking place in three provinces - Gauteng, Free State and KwaZulu-Natal and hoped to net seven suspects in all.

There has been little official communication from the Hawks beyond short statements made to television news reporters.

It is understood that one of the suspects, who has not been officially identified, was taken into custody by Hawks officials at his attorney's offices in Rosebank, Johannesburg.

The Hawks are also carrying out search and seizure operations at various business premises in Gauteng, however no further details are available at this stage.

A full statement from the Hawks has been promised, but is yet to be released.

One of the suspects in the R255m asbestos case arrested. (Photo: Supplied, NPA) One suspect fled his home in Centurion before the Hawks arrived

Another be arrested soon appeared at the State Capture Commission yesterday @nthakoana pic.twitter.com/Zu8xKhEqse

[DEVELOPING] #Newzroom405's @Karinda_J is in Richards Bay where the Hawks were hoping to make another arrest.

Tune into #Newzroom405 for more details on this developing story. pic.twitter.com/nMzJbnwen0

The arrests were made by the Hawks as part of a multi-disciplinary law enforcement team. An official announcement by the team is expected later this afternoon.

More arrests are expected, according to a Hawks spokesperson.

https://t.co/By0KBr5HQV | Zondo: Why has no one been charged or arrested in R1bn Free State housing scheme? https://t.co/l8WCJXOuzH

https://t.co/By0KBr5HQV | Zondo concerned no houses were built in the Free State despite millions being spent https://t.co/JRr5i4kDKl

A Free State official has told the Zondo commission that he doesn't see a conflict in interest in sub-contracting for a company which got a housing contract from his department. | @gerbjan https://t.co/lohn3Lm9bV

How recruiting Zondo commission investigators will speed up NPA's prosecutions

The NPA's Investigating Directorate will recruit investigators from the Zondo Commission by the end of the month to "effect quick results in priority cases".

Read here
Go to top
We live in a world where facts and fiction get blurred
In times of uncertainty you need journalism you can trust. For 14 free days, you can have access to a world of in-depth analyses, investigative journalism, top opinions and a range of features. Journalism strengthens democracy. Invest in the future today. Thereafter you will be billed R75 per month. You can cancel anytime and if you cancel within 14 days you won't be billed.
Subscribe to News24
Related Links
EXTRACT | So, for the record: Behind the headlines in an era of state capture
Ralph Mathekga | Zondo should no longer be shocked by what he hears
Corporates equally play a role in state capture, says NPA's Hermione Cronje
Next on News24
LIVE | Covid-19 in SA: 6 375 new cases

Here are the Daily Lotto numbers
Full list of lottery results
Voting Booth
Have you and your family been counted in Census 2022?
Please select an option Oops! Something went wrong, please try again later.
Yes
48% - 1321 votes
No
52% - 1456 votes
Previous Results
Podcasts
PODCAST | The Story: How one incident at Stellenbosch University sheds light on deeper issues