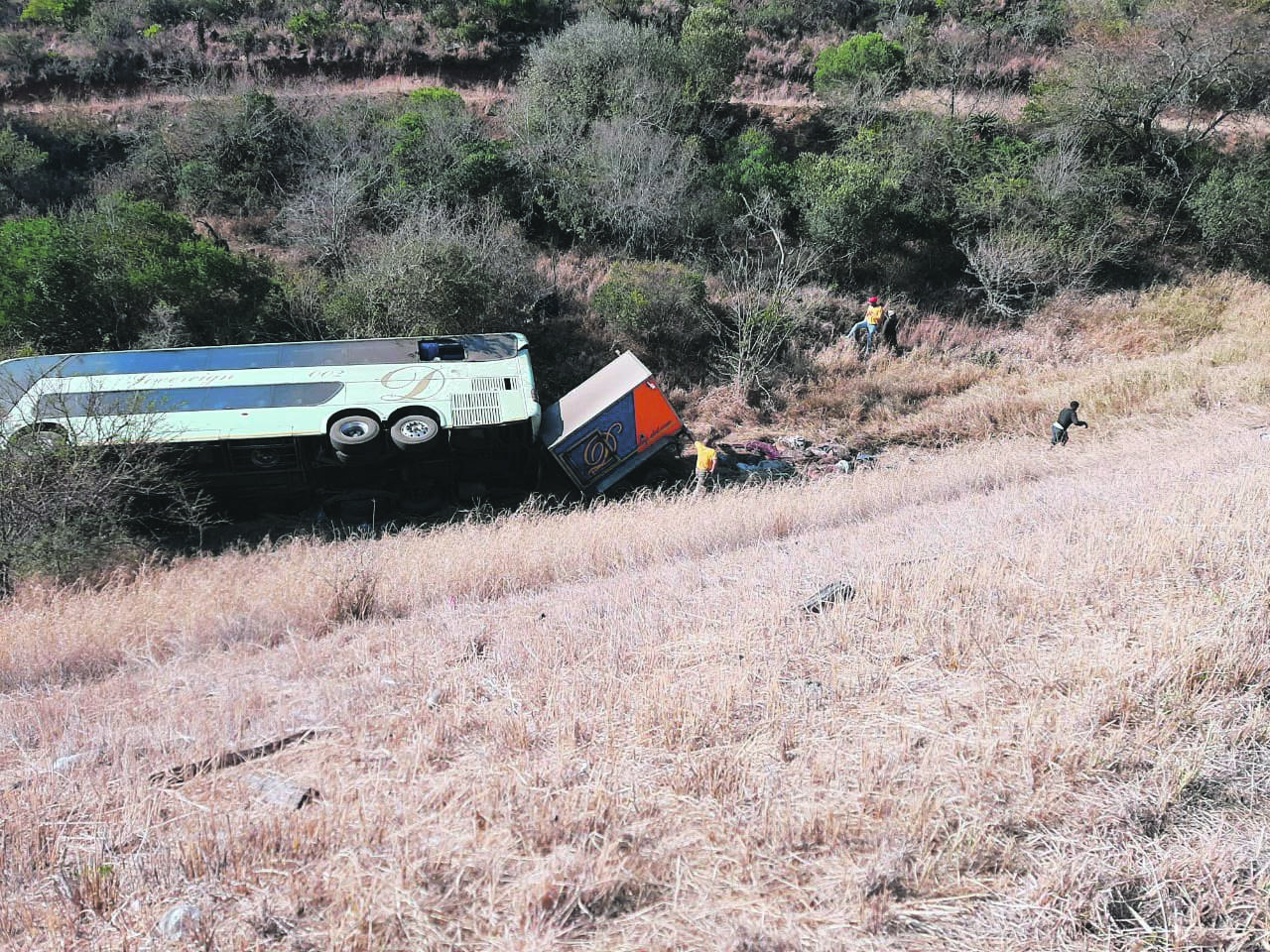 The scene of the accient.
File/News24

The death toll in last week's DMJ bus accident has climbed to 31 after one of the injured passengers succumbed to his injuries at Frere Hospital on Tuesday night.

The bus overturned on a downhill curve at the deadly Kei Cuttings, near the Kei River on the N2 between East London and Butterworth, on Monday last week.

The driver had lost control and the bus veered off the road, before plunging down a steep 200m embankment.

Thirty-one people lost their lives in the crash, while others were rushed to hospital and some escaped unharmed.

The luxury coach company that owns the bus, DMJ Transport, said it did not know what had caused the accident which also claimed their driver's life.

Chief director for clinical support services in the Department of Health, Kidwell Matshotyana, said the most recent fatality was a 51-year-old man who had died in ICU on Tuesday.

“The gentleman had some serious injuries to the chest and ribs, as well as his head. We are still trying to determine if the family had been contacted and if they are aware of his admission. There are two patients remaining in hospital, a one-year-old boy and a lady with injuries to her hand," said Matshotyana.

The Eastern Cape police are still seeking the assistance of the public to identify one of the 30 bodies from the crash.

Police spokesperson Captain Siphokazi Mawisa said that no one had come forward to identify the body of the man believed to be in his 30s.

She said only 29 bodies were identified last week. The police are investigating a case of culpable homicide.

In a statement on Thursday, Mawisa said any family who wee missing a male relative in his 30s should contact Detective Warrant Officer Ronald Engelbrencht of the Komga SAPS on 082 441 9166 or 043 831 1020.

The bus was carrying 52 passengers from Cape Town to different towns in the Eastern Cape when it was involved in the accident.

Passengers who survived the crash complained about smoke rising from the bus and that it was struggling to drive uphill.

The company claimed that the bus was checked an hour before the trip and that it was given the green light for the journey.

It also said the bus had passed a roadworthy test less than a month before the accident.

Lucky Sunday for 3 Daily Lotto players
Full list of lottery results
Lockdown For
DAYS
HRS
MINS
Voting Booth
Children between 12 and 17 can now be vaccinated against Covid-19. As a parent I am:
Please select an option Oops! Something went wrong, please try again later.
Relieved, it's been a long wait to this point
50% - 1038 votes
A bit hesitant, and will wait to see how it goes
22% - 446 votes
Completely against my child getting the shot
28% - 579 votes
Previous Results
Podcasts
PODCAST | My Only Story: Fiddling, sex jokes and flirting – another water polo coach exposed