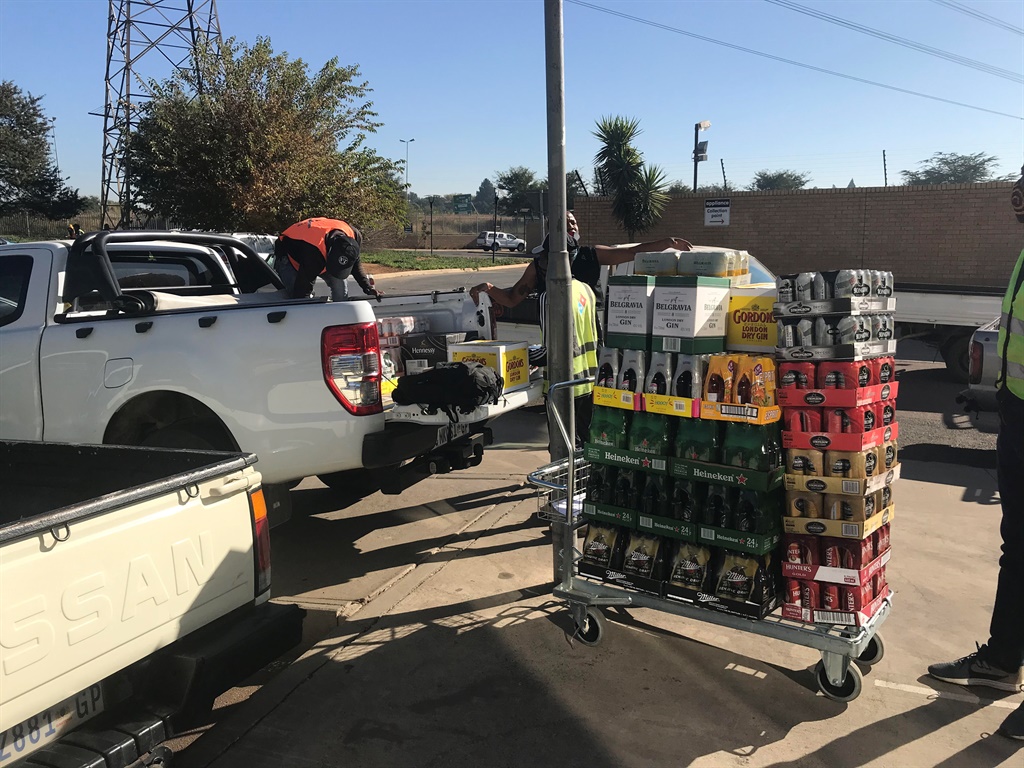 Alcohol bought at the Marko Liquor Store after the alcohol ban was lifted.
News24/Alex Mitchley

While a meeting between the Eastern Cape government and liquor trader associations resolved to co-operate in the fight against alcohol abuse in the province amid the Covid-19 pandemic, Premier Oscar Mabuyane remains steadfast in his intention to have the sale of alcohol banned again.

One includes the establishment of a joint working committee made up of liquor manufacturers, liquor associations, the police and provincial government.

The committee will also set up a local anonymous tip-off line for members of the public to report any suspicious activities like house parties, the contravention of regulations managing liquor trading during the lockdown, selling liquor to under-age individuals and the selling of illicit liquor products in the province.

"The tip-off line will be operated at the Eastern Cape Liquor Board and will report any incident to the police and liquor association members to attend to the matter," a statement read.

It agreed during the meeting a campaign should be introduced to encourage responsible alcohol consumption, produce material with educational messaging to be published using social media and other media platforms to reach out to as many people as possible.

Mabuyane welcomed the commitment made by the associations, saying it showed the sector cared more about the well-being of people than profits.

"This effort needs all of us to join this fight for the benefit of our people. We will defeat this virus when we work together because a united effort can empower us to stop the spread of the coronavirus," he added.

While the statement did not reflect on whether the premier would continue to lobby for the ban on the sale of alcohol, his spokesperson, Mvusiwekhaya Sicwetsha, confirmed to News24 his position had not changed.

News24 previously reported Mabuyane had petitioned the national government to re-impose the ban in the province until Level 1 lockdown.

According to him, since the resumption of the sale of alcohol, provincial reports from 1 to 7 June had shown a surge in people contravening lockdown regulations.

During this period, the province recorded 3 141 cases linked to alcohol, including 25 of culpable homicide, 94 of murder, 355 assault with grievous bodily harm cases, 42 of attempted murder, 51 of drunk driving and 25 of accidents under the influence, the premier told News24.

We live in a world where facts and fiction get blurred
In times of uncertainty you need journalism you can trust. For only R75 per month, you have access to a world of in-depth analyses, investigative journalism, top opinions and a range of features. Journalism strengthens democracy. Invest in the future today.
Subscribe to News24
Related Links
Mabuyane wants alcohol ban until Level 1 in Eastern Cape, hits back at 'irresponsible' critics
Lockdown: Spike in murder rate since alcohol sales ban lifted - Bheki Cele
Drink responsibly during lockdown
Next on News24
LIVE | Covid-19 in SA: Cases hit 790 004, as death toll rises to 21 535