Elections 2021: Vote ANC because it is a self-correcting organisation, says Mbalula 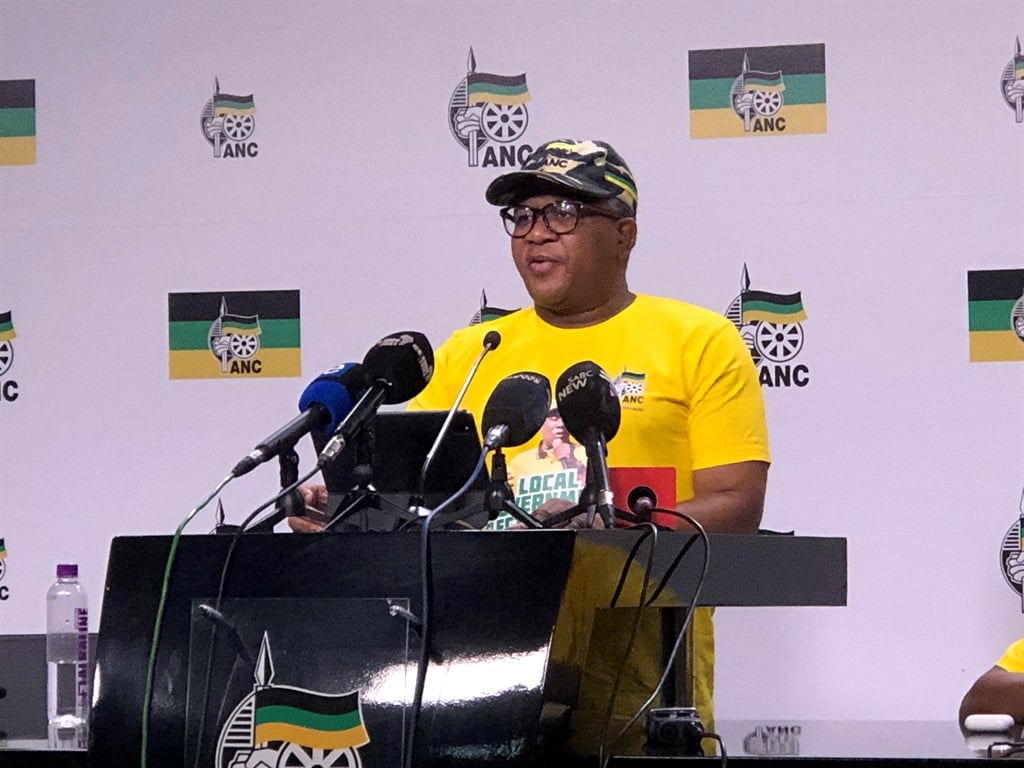 While the ANC has lagged behind other political parties on the campaign trail, it finally announced on Thursday it is ready for the upcoming local government elections.

And while ANC head of elections Fikile Mbalula addressed the media at Luthuli House, scores of ANC supporters protested outside the venue, calling on candidate lists from their regions to be nullified because it did not represent the will of branches.

During his briefing, Mbalula defended the ANC's sluggish start to the campaign season, saying it had jumped the gun and started campaigning when it sought people's approval for every candidate chosen to represent the party.

Mbalula acknowledged as the ruling party, which faced numerous corruption allegations, the task of convincing people to vote for it would be twice as hard compared to other parties.

"People who have never been in power have it easy because they only have to look around, find fault and blame the ANC.

"Whatever faults they find easily become their manifesto but we, as the ANC, have to tell the people about some of the sins we have committed during our incumbency, and then detail how we have intervention and how we are going to continue intervening going forward."

ALSO READ | Elections 2021: IEC concerned about Zille attacks, but yet to decide on course of action

He added the ANC's manifesto, which will be launched on 27 September, would be "a manifesto of learning from experience".

On the overwhelming allegations of corruption within the party's ranks that were uncovered by various law enforcement agencies, Mbalula said these same "institutions of governance that fight corruption were revamped and capacitated by the ANC who continues to make them function".

"The ANC has invested monetarily and revamped these institutions which suffered a blow during state capture.

"I see Afrobarometer says corruption has worsened but we must answer the question, what has government done to address corruption?"

Afrobarometer - which is an independent research network that measures public attitudes on economic, political, and social matters - released a report this week saying corruption had worsened under the current administration.

"Today in addressing the issue of corruption, we have people who are in government who have been affected and steps and actions have been taken.

"We have got the secretary-general of the ANC [Ace Magashule] who should be addressing this press conference today, but he is not with us because of the step-aside rule. If you are affected, you step aside. That is the ANC we have revamped," said Mbalula.

You will see the progress that we are making but we do not claim victory as we have not arrived at our goal. As we continue on the journey, we are seized with these matters and at the same time we are facing new challenges and there are no holy cows in dealing with these particular perceptions.

Mbalula said the ANC was a "self-correcting organisation", and people should continue voting for it for this very reason.

On the party's short campaign period, he added: "This is going to be the first time that we have to prepare for an election in only six months, at least for the ANC. We have never done this, but we have trust in our volunteers."

Mbalula admitted the ANC was financially strapped, and would have to be innovative when conducting its campaign.

We want to hear your views on the news. Subscribe to News24 to be part of the conversation in the comments section of this article.
We live in a world where facts and fiction get blurred
In times of uncertainty you need journalism you can trust. For only R75 per month, you have access to a world of in-depth analyses, investigative journalism, top opinions and a range of features. Journalism strengthens democracy. Invest in the future today.
Subscribe to News24
Next on News24
LIVE | Covid-19 in SA: 453 new cases as death toll hits 88 674

Lucky Sunday for 3 Daily Lotto players
Full list of lottery results
Lockdown For
DAYS
HRS
MINS
Voting Booth
Facebook is facing a fresh crisis after a former employee turned whistle-blower leaked internal company research. Do you still use Facebook?
Please select an option Oops! Something went wrong, please try again later.
Yes, the benefits outweigh the risk for me
32% - 2621 votes
No, I have deleted it
37% - 3096 votes
Yes, but I am considering deleting it
31% - 2547 votes
Previous Results
Podcasts
PODCAST | Ballot Box: Why Facebook is not doing enough against election misinformation