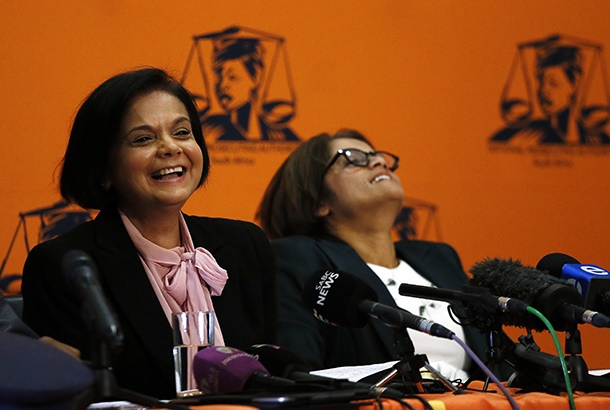 Head of the National Prosecuting Authority’s Investigative Directorate, Hermione Cronje says the investigation into the Estina dairy farm in the Eastern Free State – one of the most prominent sites of state capture – will be completed by the end of the month and will then be ready for re-enrolment in court.

Charges related to the dairy project, which involved the infamous Gupta family, the provincial government of then Free State premier Ace Magashule and trusted Gupta lieutenant Mosebenzi Zwane, are currently being formulated.

But Cronje and Shamila Batohi, the national director of public prosecutions, also expressed frustration with the levels of cooperation with some institutions and the lack of resources and skills that are hampering progress.

Batohi and Cronje said that:

Cronje told assembled journalists at an on-the-record dialogue at the NPA’s head office in Pretoria on Tuesday that the Estina matter is almost ready to go.

“We have all the bank statements where funds flowed to and have been able to put together a complete picture. The matter was withdrawn [from the High Court], because we were awaiting bank statements, particularly from the UAE. We have addressed that problem. I’m told by the forensic investigators that they will have a final report by the end of the month and then the matter will be ready to be re-enrolled.

“But there has been some reconfiguring as to how we will tackle the case because a whole lot of people were arrested. We have a slightly different strategy now. Some people are not here anymore…the investigation explains almost to the cent where the money went and where it’s ended up. Charges are being formulated around that understanding,” Cronje said.

Batohi acknowledged frustration in many circles in civil society about the lack of prosecutions related to capture and corruption and said she and her team are "acutely aware" of the importance of the first major prosecution. She, however, again explained the challenges the NPA faces to ensure cases are court-ready and winnable.

NPA 'can't go after everything'

The NPA has relied heavily on the support and service of private forensic investigators who were tasked in ploughing through bank statements, documentations and other pieces of evidence to bolster various open capture and corruption dockets. This was necessitated because of the enormous loss of skills and institutional knowledge during the years of capture which hollowed out the state's ability to deal with complex financial and corruption matters. And although there are good levels of cooperation with the Hawks "it has been a problem" to get enough good and experienced Hawks investigators seconded to the NPA, Batohi said.

Cronje said the NPA "can't go after everything" and will lay charges related to counts it believes it can win "and then we’ll have to be able to explain it and answer for our decisions".

Both Batohi and Cronje reference various investigations, including into corruption at Eskom, VBS and Steinhoff, without divulging exact details of what the status of those investigations is.

Batohi reiterated that rolling back the ravages of state capture will require a multi-pronged strategy involving various state institutions, including the SA Revenue Service, the Special Investigative Unit, the police and the Hawks as well as the Financial Services Conduct Authority.

And Cronje emphasised that the ID and NPA’s mandate is "to reclaim the state from capture".

They were both reluctant to comment on the levels of resistance to reform inside the NPA, but did acknowledge that they were working amid trying conditions. Batohi said the NPA is "a difficult, complex environment", while Cronje described it as "a contaminated space".

Cronje said they are under no illusions about what lies ahead once high-profile prosecutions commence, adding that both she and Batohi have already been the targets of disinformation.

“We are ready for serious attacks against us, the prosecutors and witnesses,” Batohi said. “We expect frivolous court challenges when we go to court, and we have to get procedures in place in how to deal with it. If you can’t win in court, then you fight the people and the process. We’re expecting that,” Batohi said.

Although there is "good cooperation" with the Zondo commission into capture there are "legal challenges" which prevents the commission from sharing information with the NPA.

"The Zondo commission cannot share [information] with us unless it has been made public or if the chairperson has otherwise authorised the release of information, and obviously there’s an unwillingness to do that because there’s much to be gained from people coming forward and giving evidence. We are in dialogue on how to manage challenges on both sides of the fence."

We live in a world where facts and fiction get blurred
In times of uncertainty you need journalism you can trust. For only R75 per month, you have access to a world of in-depth analyses, investigative journalism, top opinions and a range of features. Journalism strengthens democracy. Invest in the future today.
Subscribe to News24
Related Links
Estina dairy farm project an example of organised robbery, Peter Hain tells Zondo commission
Millions in irregular expenditure had nothing to do with Vrede dairy project - former Free State MEC
Why was R29m removed from an Estina linked account? – Thabethe fails to explain
Next on News24
LIVE | Covid-19 in SA: 453 new cases as death toll hits 88 674

Lucky Sunday for 3 Daily Lotto players
Full list of lottery results
Lockdown For
DAYS
HRS
MINS
Voting Booth
Facebook is facing a fresh crisis after a former employee turned whistle-blower leaked internal company research. Do you still use Facebook?
Please select an option Oops! Something went wrong, please try again later.
Yes, the benefits outweigh the risk for me
32% - 2604 votes
No, I have deleted it
38% - 3087 votes
Yes, but I am considering deleting it
31% - 2531 votes
Previous Results
Podcasts
PODCAST | Ballot Box: Why Facebook is not doing enough against election misinformation