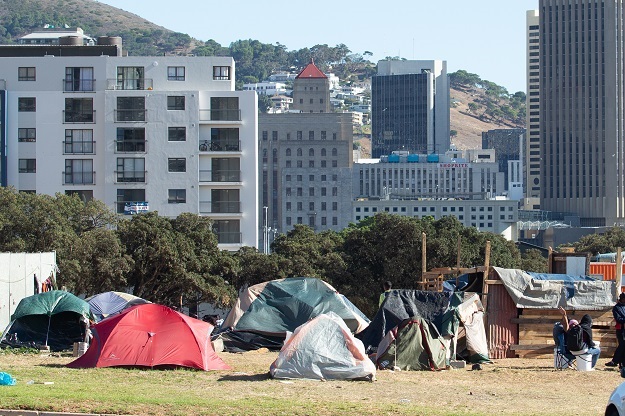 The Western Cape High Court has found that the City of Cape Town's eviction of 46 homeless people from an empty parking lot in District Six last month was unlawful.

In the judgment on Thursday, Judge Rosheni Allie also interdicted and restrained the City from carrying out further evictions at the parking lot without a valid court order.

"[The City] is interdicted and restrained from demolishing damaging, confiscating or otherwise destroying and disposing of the applicants' tents and habitable structures and personal property without a court order authorising them to do so," she said.

She ordered the City to return the people's belongings to them within five days.

If the City is unable to return the tents, building materials, goods and possessions, it will be liable for compensatory amount of R1 700, she said.

[That the City] relies on the authority vested in it by the by-law to confiscate items that are kept in a public place unlawfully, does not detract from the fact that the respondent caused the applicants' belongings to be removed without due process. A notice on the day on which the removal occurred does not amount to adequate notice nor due process.

In a statement, the City said it planned to appeal the judgment.

"The City notes the Western Cape High Court judgment ordering the return of the applicants and their tented structures to the parking lot in Sydney Street, within the District Six restitution precinct. The City will appeal this untenable judgment."

It added that it was committed to protecting District Six restitution land from being overrun by tented structures.

"There can be no reasonable expectation, nor a clear right, for anyone to live unlawfully and permanently in tents in public spaces and to reserve it for their exclusive use," the City added.

The evictions sparked anger among activists who said it formed part of a series of illegal evictions which the City carried out.

And while the battle between the parties played out in court, the City approved the streets, public places, and prevention of noise nuisances by-law, which will enhance law enforcement officials' powers.