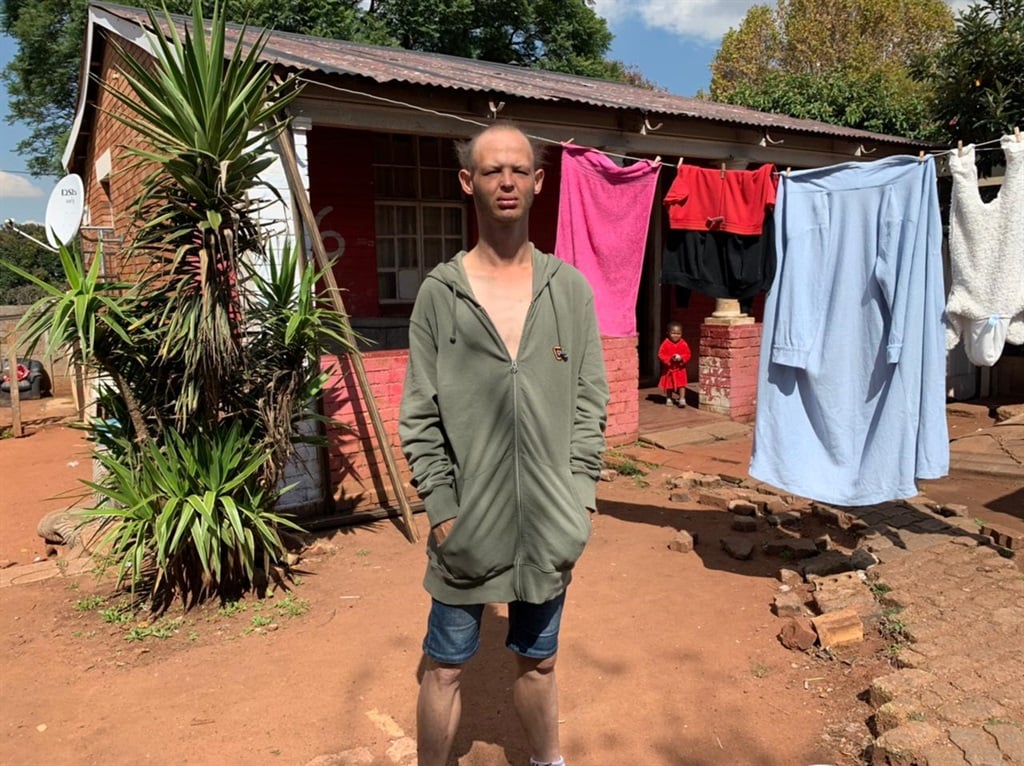 Speaking his truth | Gabriel "Tokkie" du Preez in front of his late mother's house in Vrededorp, Johannesburg where Waddy Jones (Ninja) and Anri du Toit (Yolandi Visser) of Die Antwoord adopted him as a foster child in 2013.
Iavan Pijoos

The adopted son of the controversial rap-rave group Die Antwoord has made sensational claims of child abuse against his foster parents, including the exposure to pornography, violence and rituals. 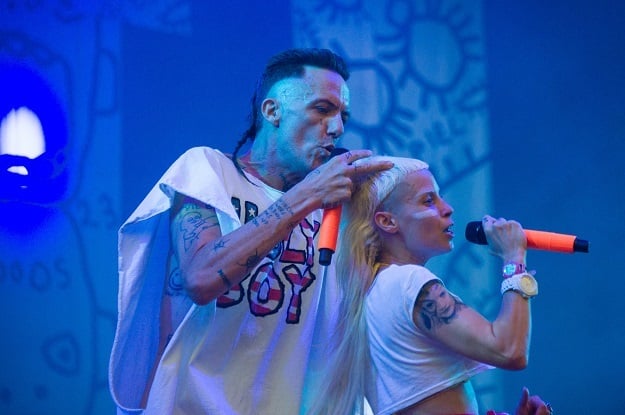 Now 20-years old, destitute and back in the poor Vrededorp neighbourhood in Johannesburg, where Waddy Jones (Ninja) and Anri du Toit (Yolandi Visser) "picked me up from school" in 2010 at the age of nine, Gabriel "Tokkie" du Preez has spilled the beans about his sordid childhood with the international music stars.

Some of the more shocking, potentially illegal allegations made against the artists, include:

In response to a detailed list of accusations against them, Die Antwoord's only response through their agent Scumeck Sabottka from MCT-Agentur in Berlin, was: "Die Antwoord don't agree with Tokkie's statements."

An 11-year-old Tokkie du Preez as he appeared in Die Antwoord's video "I Fink U Freeky", released in 2012.
Youtube Die Antwoord

Die Antwoord, who had signed multimillion-rand record deals since their breakthrough onto the global music scene in 2010, based their brand on imitating the so-called Zef lifestyle and culture of poor white suburbs like Vrededorp, and the numbers gangs of the Cape Flats.

They adopted Du Preez and his minor sister, now 14, under foster parenting agreements and had used them as actors and props in a number of their very successful shows, albums and videos like "I Fink U Freeky" and "Ugly Boy". They also paid another poor family in Johannesburg to use their 12-year-old son in their projects and had one biological daughter of their own.

At various times over the past decade, all four children had shared homes with Jones and Du Toit in Cape Town and Johannesburg. Du Preez also lived with them in Los Angeles for a few months, but returned to South Africa as he was missing his biological family.

Jones and Du Toit had previously been accused of appropriating different South African cultures for their success, but this was the first time a foster child had spoken out about their alleged exploitative and abusive behaviour towards their adopted kids.

"They made me believe I was the devil,” Du Preez, who suffered from a rare skin disease called hypohidrotic ectodermal dysplasia, told Crossman in the video interview. Included in the video is a clip of Du Preez, then nine or 10-years old, floating on a pool lilo, telling the camera, "come to Yolandi's house, I will f*****g burn you in hell, I will burn your face on the stove".

During an interview with News24 on Friday, Du Preez sat on a black and white five litre paint tin in the backyard of the house in Vrededorp - also referred to as Fietas - his late mother left behind for his 14-year-old sister - a far cry from the glitzy life of Die Antwoord, who lived in a R26 million mansion in Cape Town.

Du Preez and his brother shared a bedroom in the home while they rented out the rest of the rooms. In the backyard, there are several tiny, corrugated iron and wooden shacks where about eight families lived.

"We rent out the rooms to make a living. We asked them [families] to pay us R400 a month so that we can all survive and fix up the house. The living situation here is quite bad, because we had to remove the bathroom to put another family in.

"There is one toilet that everyone uses outside on the stoep."

Du Preez recalled the first few weeks he lived with Jones and Du Toit at their house in Parkhurst, Johannesburg after they saw him walking from school and agreed to a foster care agreement with his mother.

Tokkie du Preez claim he was coached by Waddy Jones (Ninja) to narrate a hateful video message to his biological family.
Youtube

But things changed shortly after the couple allegedly forced Du Preez to record videos of him degrading and swearing at his biological family for being poor.

"They made me swear more and made me believe that I could burn people in hell and that I am the king of hell. They told me that I could bring darkness upon the world," he said.

Du Preez claimed that Jones and Du Toit promised to take good care of him, but they were never around and were always busy and on tours. Most of the time, he was alone at home with an au pair.

"It felt like my life was messed up, especially when it came to my family," he said.

News24 obtained a copy of the foster care agreement signed in 2013 between Du Preez's now deceased mother, Josephine, and the Die Antwoord duo of Jones and Du Toit. In the agreement, they agreed to:

Du Preez's version of events, corroborated by other witnesses and evidence, called into question whether the duo complied with any of the legally required terms.

Family reunion | Waddy Jones (Ninja) and Tokkie du Preez at a staged "family reunion" in 2020 during which Jones handed Du Preez R5 000 in cash and said it was his last contribution. He advised his foster son to rather go fish, than to ask for a fish. In the interview with Ben Jay Crossman, Du Preez remarks that Jones wouldn't know what to do with a fishing rod if he had to give him one.
Youtube

Jones and Du Toit had a similar foster adoption arrangement with Du Preez's younger, minor sister. He said Die Antwoord forced them to undress in front of them when they bought them new clothes. They were punished if they refused.

Du Preez claimed he was very disturbed when a naked Du Toit once asked him to spend time with her in a room at a party at a house in Vrededorp owned by Die Antwoord. He was 13 at the time.

The worst part was seeing my supposed-to-be mother or adopted mother being naked in a room, drunk... experiencing my mother being drunk, naked and wanting me to spend time with her in the room while she was naked... that I found very disturbing.

Incest is a common theme in Die Antwoord's music videos.

He said he also feared for his minor sister's safety and wanted to protect her from Jones and Du Toit.

Du Preez said his sister told him when he saw her last week that she no longer wanted to visit the couple in Cape Town.

"Why does Ninja want to see my sister naked? She is so small. It is pretty weird, it feels like a pervy vibe to me that Ninja wants to have with my sister. Every time when he phones the family, they ask if my sister is pregnant yet and that is not going to happen, not on my watch."

Du Preez received home-schooling up to Grade 9, but thereafter dropped out and essentially became a labourer for Jones and Du Toit.

"Tokkie was playing in the street with his brother and a few kids. I said 'hi' to them, met Tokkie's mom Josi and took some photos of everyone. Later, I returned and took more pictures of the family and also made some videos.

"During this time I was working with Die Antwoord and showed them the pictures. Later I heard Ninja and Yolandi went to look for Tokkie and were going to use him in the 'I Fink U Freeky' video with (artist) Roger Ballen."

Crossman organised last week's interview after Du Preez reached out to him in a bid to restart his career. In the video, Du Preez tells Crossman his dream was to become an actor or a model.

"Tokkie's bravery is contagious... When Tokkie reached out to me and told me his story I believed him 100% based on what I had personally witnessed," Crossman said.

Du Preez said he wasn't allowed to stay with the other children at their Higgovale, Cape Town mansion and they rented a room for him in Hout Bay.

"I had to wake up at 05:00 to make sure that I am at their house by 06:00 to take the children to school. They had other drivers as well, but I did most of the driving and things for them."

At the time, he was underaged and did not have a driver's license.

Du Preez said he regretted meeting Jones and Du Toit and wondered what his life would have been without them.

"I could have spent so much time with my biological mother and not missing out on all of those years because now the only memories I have of my mom are the happier years from the age of seven and until she got sick of cancer."

* If you have further information on this story, please send tips and facts to tips@24.com

Here are the Daily Lotto numbers
Full list of lottery results
Voting Booth
Have you and your family been counted in Census 2022?
Please select an option Oops! Something went wrong, please try again later.
Yes
47% - 4059 votes
No
53% - 4523 votes
Previous Results
Podcasts
PODCAST | The Story: Teen who murdered his mother gets 25 years behind bars