Fast and furious: Inside the election of the new Joburg mayor 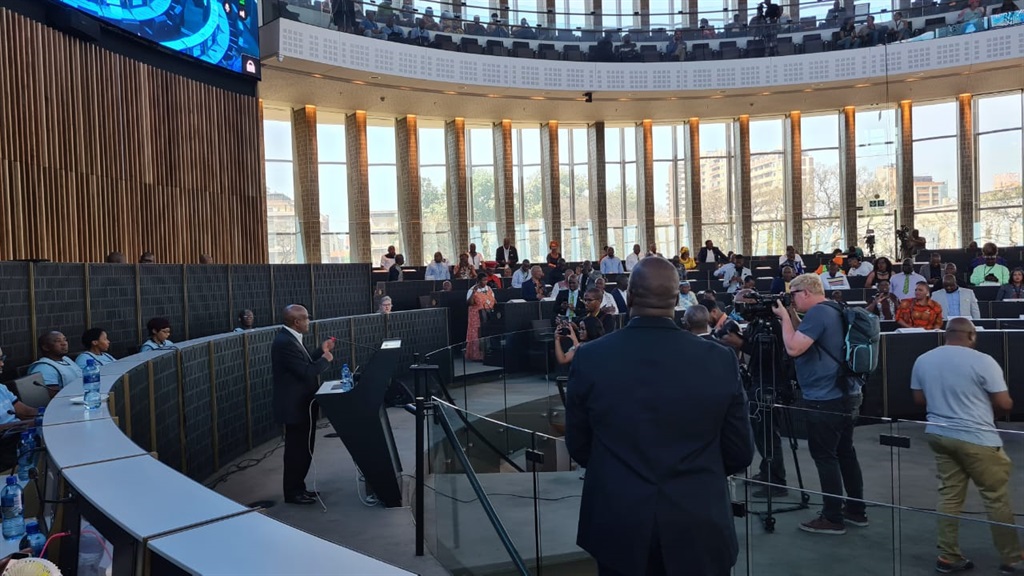 Johannesburg mayor-elect Dada Morero delivers his acceptance speech on Friday after a vote of no confidence in Mpho Phalatse.
Alex Patrick

The election of Dada Morero as the new mayor of the City of Johannesburg on Friday was as fast as it was confusing.

The vote itself was held by a show of hands and happened as some members of the DA coalition had their backs to the opposition, who had raised their hands in support of a motion of no confidence in mayor Mpho Phalatse.

It happened amid a verbal back and forth, with some councillors refusing to take their seats and shouting at speaker Colleen Makhubele.

The shouting from the DA was because they had asked for an hour-long caucus break. This was denied by the speaker, and the DA took to the floor.

Phalatse then left the chamber.

Just before 11:00, the motion of no confidence in Phalatse was passed, with 139 of the 145 councillors who had signed the register in favour of the motion. The IFP abstained.

Because many members of the DA coalition had not arrived, and those who did refused to sign the register, there was no one to oppose the motion, and it was passed.

Makhubele then called an hour break for Electoral Commission of South Africa (IEC) officials to witness the proceedings. This was where the confusion began.

Because many people had not heard the call to vote in a motion of no confidence, it was believed the hands up meant that the motion to vote was agreed upon, and not the actual vote.

ANC members, for example, told News24 during the break that the vote was to agree on a vote of no confidence in the mayor. They believed the IEC would be introduced to witness the motion.

The DA, however, through Phalatse's spokesperson Mabine Seabe, acknowledged defeat and left the city office entirely.

When asked for clarity, a member of the IEC told News24 it appeared that an "illegal vote had taken place". He shrugged and said he wasn't sure, before re-entering the chamber.

Once back in session, only members of the ANC-led opposition went back to elect a replacement for Phalatse.

Morero was nominated uncontested and thus became the mayor-elect.

As the opposition parties celebrated the win, the DA-led coalition parties were notably absent. Also notable was the EFF, whose members did not rise in celebration of the mayor-elect. This despite the EFF voting with the ANC to oust Phalatse and vote Morero in.

"Today is a good day to fall in love again with the City of Johannesburg," Morero began his acceptance speech.

When we say we love Joburg, we mean it. A love like no other. Love respects and appreciates. We need to go back to the developmental task of growing Johannesburg to the developing city it once was.

He said the City would look like a construction site once again and apologised to residents who had voted for the DA in 2016.

"What happened today illustrates what can go wrong when government fails. The DA made us promises but gave us a false golden start."

The mayor-elect was referring to the Golden Start report by the mayor, which was a test to see if the city had improved six months after the DA-led multi-party government took over leadership of the City of Johannesburg.

At a media briefing after the event, ANC leaders occupied a boardroom, taking down City of Johannesburg posters. This, they said, was because they were speaking as the ANC and not as members of the council.

Morero was speaking as the ANC regional chair as well as the mayor-elect.

He said the first two things he needed to do was to fix the finances of the City, "which is in a crisis", and implement an energy mix strategy to combat load shedding.

"[The City] budget is R3 billion under, and we are not able to meet the deficit. The collection rate has dropped under 80%, so we are going to spend time balancing the finances.

"We are also going to implement the energy mix strategy. We had developed it in 2016 – before 2016 happened (when the DA took over the City). If that didn't happen, we wouldn't have had an energy crisis."

While this was taking place, members of the DA council and other staff were packing up their personal belongings.

A DA member told News24 they did not know if they would be allowed back into the building on Monday.

Phalatse spoke in a social media message to residents from the DA headquarters, Nkululeko House, in Bruma. She thanked residents for their prayers and support and said she realised it was a "very confusing time and a sad time".

She said what had happened was "unlawful” and an "injustice".

We are just waiting for the courts to redeem the residents of Johannesburg from what has happened here today. We believe in our judicial system and believe that justice will be served for our six million residents.

She told residents to "hang in there" and said coalition parties were "fine". She added that the DA would fight for residents and not "leave it to the hands of the corrupt cabal".

These words were reiterated by DA leader John Steenhuisen later on Friday on the party's YouTube platform.

Steenhuisen lambasted the ANC and minority parties which had, he felt, betrayed the coalition.

He said Phalatse had been the target of a "coordinated attack".

"Mayor Phalatse has achieved 71% of her targets to date, and we have many examples of how the residents of the city have started to benefit from good, clean governance and dedicated service delivery projects for all residents."

He said Makhubele had ignored due process when she convened the council meeting to oust Phalatse "in a process so flawed that we will challenge it in court".

In a statement issued by Gauteng ANC secretary Thembinkosi Nciza, he extended gratitude to parties that "put their differences aside… in the removal of a chaotic DA-led coalition".

He said the multiparty government could now "put its shoulders to the wheel and activate service delivery which had come to a standstill in Johannesburg".

Morero is expected to officially become mayor at a ceremony on Saturday at 08:00.

We live in a world where facts and fiction get blurred
In times of uncertainty you need journalism you can trust. For 14 free days, you can have access to a world of in-depth analyses, investigative journalism, top opinions and a range of features. Journalism strengthens democracy. Invest in the future today. Thereafter you will be billed R75 per month. You can cancel anytime and if you cancel within 14 days you won't be billed.
Subscribe to News24
Next on News24
BREAKING NEWS LIVE | Four dead, five others injured in shooting at KwaMashu men's hostel