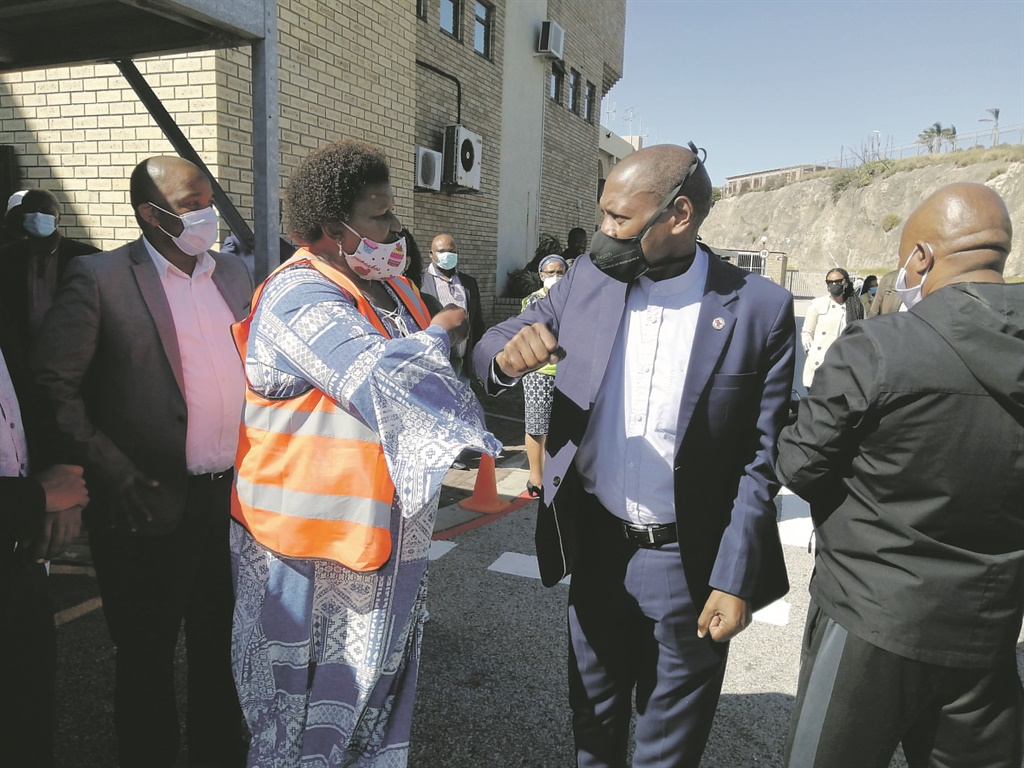 MEC for Health Sindiswa Gomba and Minister of Health Dr Zweli Mkhize after a meeting in Port Elizabeth. (Mkhuseli Sizani)

The DA in the Eastern Cape will table a motion to debate the removal of the province's MEC for Health, Sindiswe Gomba, in the provincial legislature.

In a virtual press briefing on Monday morning, DA provincial leader Nqaba Bhanga said there was a lack of leadership in the provincial government's response to the Covid-19 pandemic.

He said the party would, therefore, table a motion to debate the removal of Gomba in the provincial legislature.

"For the province to move forward, we need capable people," he said.

"The extent of these failures was highlighted when the national Minister of Health, Dr Zweli Mkhize, had to assign a team of medical experts from national to assist in curbing the spread of the virus," Bhanga said.

"The Premier, Oscar Mabuyane, has also been forced to bring in additional support, appointing the ex-MEC for Health in the province, Dr Bevan Goqwana, as well as ex-HOD for the provincial Department of Health, Dr Siva Pillay."

He said this step was a "true indictment" of the leadership in the health portfolio.

Asked if replacing the MEC during a pandemic wouldn't lead to more instability, DA provincial spokesperson for health Jane Cowley said: "Honestly speaking, I don't think there can be more instability in the health department."

She said a capable, fit-for-purpose person would stabilise the department.

Furthermore, the DA demanded daily updates on Covid-19 infection statistics for the province, as is done by premiers Alan Winde and David Makhura, in the Western Cape and Gauteng respectively.

DA MP and national spokesperson on health, Siviwe Gwarube said they will lodge requests in terms of the Promotion of Access to Information Act (PAIA), as they know the information is collated daily and provided to Mkhize.

Among the DA's suggestions is a moratorium on funerals, which has been a major driver of infections in the province. The DA proposes that only 10 close family members are allowed to attend funerals.

News24 has approached the provincial government for comment. This will be reported once received.

Gomba made headlines last week when she participated in a Zoom briefing with all other provincial MECs, as well as Mkhize, to give an update on efforts to combat Covid-19.

Before the briefing moved on to the next MEC, Gomba, who's microphone was still on, could be heard saying: "Andidikwe [I am fed up]."

She has subsequently apologised to Mkhize and said that, while it had come across as if she was fed up with the briefing, she was actually fed up with the clothes she was wearing.

Speaking to News24 last week, Gomba defended her position, after the ANC Youth League in Nelson Mandela Bay also called for her removal, questioning her credentials.

"My history of being in health goes back to the 90s. In Buffalo City municipality I was heading health. I went into programmes of Aids. I spent 25 years in municipal health. I was also chair of the ANC subcommittee on health. I would not know why am I am called incapable. I know my work very well," she told News24 at the time.

We live in a world where facts and fiction get blurred
In times of uncertainty you need journalism you can trust. For only R75 per month, you have access to a world of in-depth analyses, investigative journalism, top opinions and a range of features. Journalism strengthens democracy. Invest in the future today.
Subscribe to News24
Related Links
Increased law enforcement to monitor Eastern Cape areas with high Covid-19 infection rate - premier
'I know my work very well' - Health MEC Sindiswa Gomba defends herself after public embarrassments
'Andidikwe': Eastern Cape health MEC's briefing blunder
Next on News24
LIVE | Covid-19 in SA: Infections rise by 1 862, deaths up by 110