Joe said it was "wonderful" to be recognised by the mayor of Cape Town.

Two Cape Flats brothers have managed to feed one million mouths across the Mother City after starting a feeding scheme when the Covid-19 pandemic hit the country.

Joe "Spaza" who had been working in the hospitality industry for many years, and his brother Faieck, who has a background in the financial sector, started the Invisible Hands feeding scheme last year in a bid to feed struggling residents affected by the impact of the pandemic.

On Saturday, the brothers celebrated the milestone of feeding one million mouths by cooking 105 pots of food (100 litres each) and distributing meals in various Cape Flats communities.

Joe and Faieck told News24 they cooked a "noodle broth" for the celebration and distributed it in several areas, including Wynberg, Muizenberg, Mitchells Plain, Delft, Hanover Park, Atlantis, Paarl, Worcester and Grabouw.

And even Cape Town Mayor Dan Plato managed to pop in for the occasion to congratulate the brothers for the work they were doing in communities.

Joe said it was "wonderful" to be recognised by the mayor of Cape Town.

Two Cape Flats brothers are reaching for the stars as their feeding scheme, Invisible Hands, has fed one million mouths across the Mother City.
Supplied

According to the brothers, the mayor tried out their noodle broth and thoroughly enjoyed it.

"The mayor was astounded that we are able to make pots and pots of food in the little space we have at my home," said Joe.

"Invisible Hands was started in Joe's garage at his house in Wynberg. We literally just had 80 cents in our kitty. We had no idea how we were going to pull the food scheme off, but we knew we needed to feed people that didn't have the means to buy or get a plate of food," Faieck said.

According to Joe, Faieck had just received his salary and had sponsored the very first pot of food.

"Our very first pot of food was a pot of chicken akni. We ended up feeding 250 people in the Parkwood area. It was wonderful to see so many people grateful for the food," said Joe.

Joe said even though they have managed to feed one million people, they still feel like the feeding scheme is in its infancy.

The brothers manage to feed those less fortunate by generating donations through fundraisers, Joe's contacts in the hospitality industry as well as friends and family. 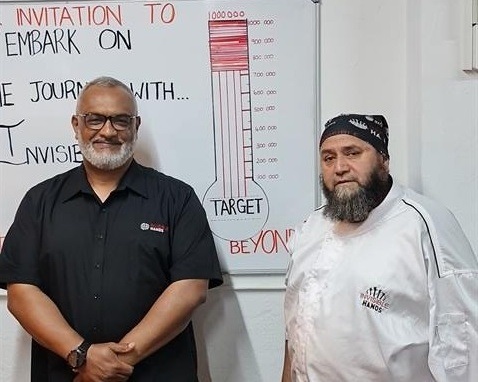 Wynberg brothers Joe and Faieck Samodien said they cooked a "noodle broth". They distributed it in areas such as Wynberg, Muizenberg, Mitchells Plain, Delft, Hanover Park, Atlantis, Paarl, Worcester, Grabouw and many other areas in celebration of feeding one million mouths. (Supplied) Two Cape Flats brothers have managed to feed one million mouths across the Mother City after starting a feeding scheme when the Covid-19 pandemic hit the country.
Photo Supplied Ingredients are donated to the organisation
Photo Supplied

"We've been very blessed to have people recognise the brand and come on board to donate rice, potatoes, bread, meat, noodles and soup, to name but a few," he said.

They said their meals include sausage bredies, hake broths, dhal and rice and different types of soups.

"We try and make at least 100 pots [of food] a week to feed the communities," said Joe.

According to the brothers, their registered non-profit company (NPC) has been "blessed" to such an extent that they have managed to feed residents almost every weekday and most Saturdays.

"Joe left his job in the hospitality industry to dedicate his time to the organisation. We saw many people that were hungry, so our main aim was to help feed them and assist where we can. It's been very rewarding thus far," Faieck added.

Joe said he was committed to the organisation when he started but quickly realised that being of service to humanity was a lifestyle.

"It was not difficult leaving my day job as my passion lies within serving my community," Joe added.

Faieck said the organisation had also started contributing to other community organisations by supplying them with ingredients to cook food:

The need for food supplies became bigger, so we decided to reach out to family, friends, colleagues and business partners. The responses were overwhelming.

The brothers said their goal was to supply at least one organisation per day with food.

"We ended up supplying six different feeding schemes and schools with ingredients for them to make food at their own institutions," said Faieck.

During the hard lockdown in 2020, they started cooking food and acquired their own big pots and gas burners.

It hasn't always been easy. There were plenty of days when we didn't know where the next batch of ingredients was going to come from, but we pulled through.

The brothers said their long-term goal for their non-profit was to expand and move to a bigger premises.

"We consider the people we feed as our guests, and to know that we can make a difference in at least one person's life by providing them with a home-cooked meal, is a reward in itself. It is really a humbling experience when you know you are able to lend a helping hand to the less fortunate," Faieck said.

"We are wanting to grow the one million mouths to another million, and we hope to achieve that over the next year," the brothers added.

Never miss a story. Choose from our range of newsletters to get the news you want delivered straight to your inbox.
We live in a world where facts and fiction get blurred
In times of uncertainty you need journalism you can trust. For only R75 per month, you have access to a world of in-depth analyses, investigative journalism, top opinions and a range of features. Journalism strengthens democracy. Invest in the future today.
Subscribe to News24
Next on News24
LIVE | Covid-19 in SA: 80 new deaths as cases hit 2 917 846