Nine-year-old Romario Valentine from Durban exceeded his own R15 000 goal of helping to fund the Umgeni River Bird Park after raising more than R20 000.

The youngster was invited to the popular bird park over the weekend after he raised awareness for the financially strained sanctuary which has been hard hit since the Covid-19 lockdown began in late March.

He enjoyed his ninth birthday celebrations at the park after he was invited by curator Tarryn Bristow on Saturday and was presented with a certificate of excellence by the Education and Awareness Programme co-ordinator, Grant Aggett-Cox.

She said her son was taken on a short-guided tour, making his birthday wish come true. He had a chance to see a galah cockatoo, called George, up close.

Romario was also showed a hamerkop's nest close to the park's waterfall. These birds have returned to the park during the lockdown after more than 20 years.

When he left, he received a fluttering ovation from the resident macaws and white cockatoos, including a "hello" and bobble head dance from one of them. 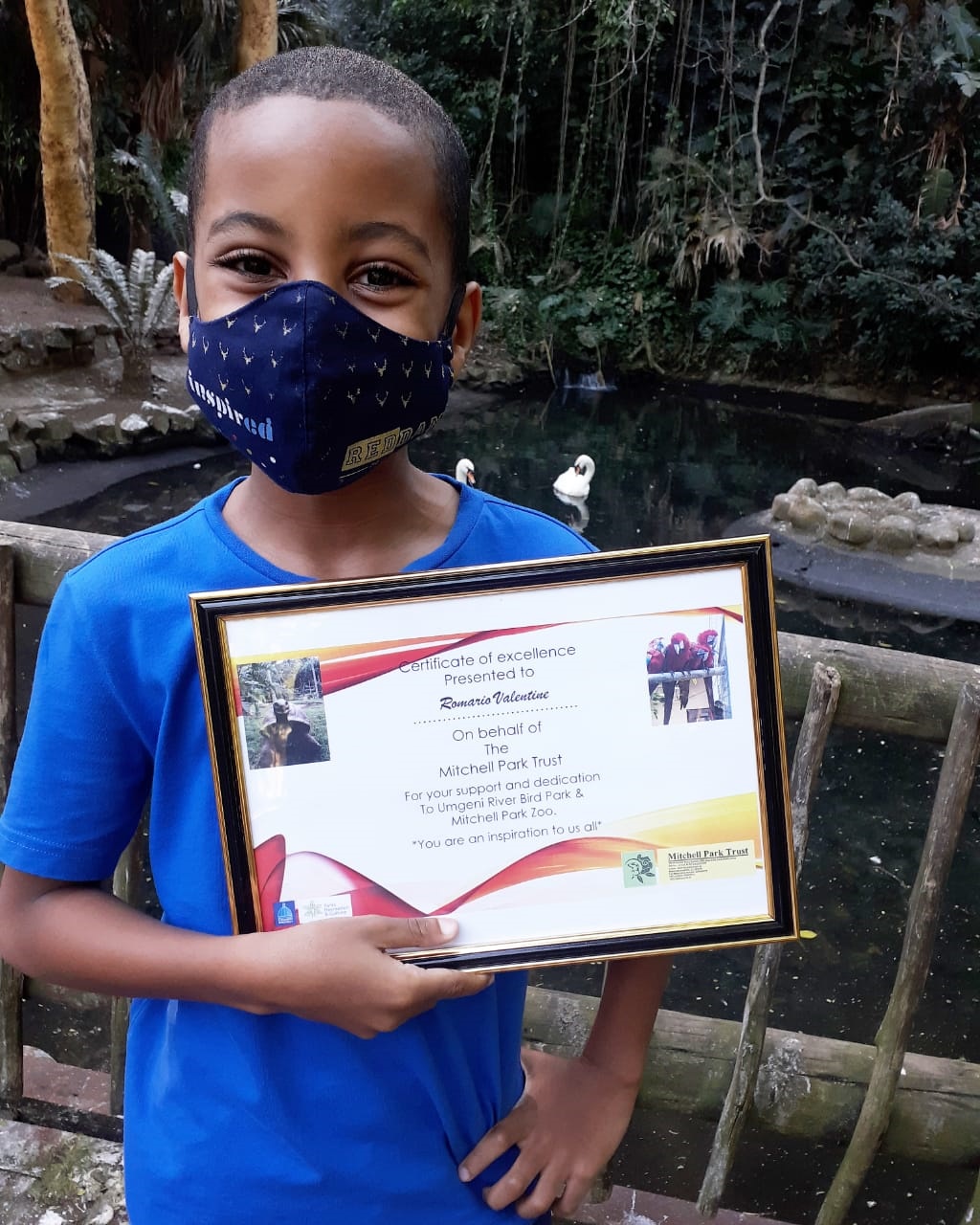 Moodley said even she was overwhelmed by the birds' reaction.

"I was overwhelmed by that. We just want people to try to support the bird park."

By Sunday, Romario, ably assisted by his mother, raised R20 698.62. The campaign will remain open until the end of the week should last minute well-wishers want to contribute to the campaign.

"Thank you to my parents and everyone who shared and supported my bird conservation campaign and Umgeni River Bird Park who gave me the opportunity to assist. Together, we have helped the birds," the elated boy said.

Moodley added she was proud of her son.

"I have been in contact with Tarryn and she said they have received a lot of calls from overseas people. The campaign spread internationally. The bird park houses many birds from all over the globe."

He thought it was a joke

She said Romario first thought she was joking when she told him they would spend time at the park, which has been closed since the outbreak of the coronavirus.

"He first thought I was joking, it became a reality when we went to the actual bird park. He is quite a joker and he thought I was pulling his leg. When we were at the bird park he was anxious, but he was so overwhelmed when he saw the birds."

Moodley added her family had been supporting charitable organisations and wildlife for many years.

"I started when I was 14 doing things like that. It is something we do naturally. We cannot go to people for money, but through the crowdfunding, we found a way to reach out to family and friends to contribute and market the bird park."

She added: "They do such an amazing job. You can never see all the countries in the world, but at the bird park, you can get a taste of it."

If you want to donate money to the bird park, visit here.

We live in a world where facts and fiction get blurred
In times of uncertainty you need journalism you can trust. For only R75 per month, you have access to a world of in-depth analyses, investigative journalism, top opinions and a range of features. Journalism strengthens democracy. Invest in the future today.
Subscribe to News24
Related Links
FEEL GOOD | Cops reach into their pockets to help family who lost home in blaze
FEEL GOOD | Young Durban environmental activist pledges R12 000 to support bird sanctuary
Covid-19 survivor on the move: Patient dances out of Groote Schuur after 77-day hospital stay
Next on News24
LIVE | More companies make vaccines mandatory as 4th wave hits SA

Lucky Sunday for 2 Daily Lotto players
Full list of lottery results
Lockdown For
DAYS
HRS
MINS
Voting Booth
President Ramaphosa has punted the idea of mandatory Covid-19 vaccinations for South Africans. This is:
Please select an option Oops! Something went wrong, please try again later.
The right thing to do. We desperately need more South Africans vaccinated to prevent further mutations and restore normality in our lives.
71% - 10570 votes
A risky strategy. Compulsory vaccinations may have unintended consequences and damage our rollout campaign.
29% - 4259 votes
Previous Results
Podcasts
PODCAST | The Story: The Omicron variant and what we know so far