FEEL GOOD: 'He is smiling down on me' - Cape Flats man starts soup kitchen in memory of his uncle The organisation recently had a pop-up vaccination drive on the open field for people to get jabbed. According to Rylands, about 98 people took up the opportunity to get vaccinated.

A 22-year-old man is feeding close to 300 people a day from a soup kitchen he started on an open field in Manenberg in memory of his uncle.

His uncle helped to start the initiative before he died of Covid-19 on New Year's Eve last year.

According to Rida Rylands, he and his late uncle, well-known community leader Yaseen Regal, saw the need for food aid in the area and decided to "step up".

"We launched our non-profit organisation under Level 5 of lockdown. My uncle had put out a call for assistance with donations in making a pot of soup for the people. We made our first 110-litre [pot] of vegetable soup and distributed it to whoever had come to get some," Rylands told News24.

He added that he was "astonished" at how many people came out to the field when they heard that free soup was being handed out.

"We quickly realised that the need was much greater than what we had initially anticipated. Plans were put into motion and the Surrey community fund was born," he said.

With donations from local businesses, friends and family, they rallied together to make food for those in need.

Because of the large number of pots they used, those who pledged to help make the food ended up cooking in their homes.

"To make 110 litres of food daily is no joke. There are onions, carrots that need to be chopped up, bread must be made, the rice must be cooked. It's a lot! So, to have volunteers offering up their home space and time to assist the NPO was absolutely fantastic," Rylands said. The organisation makes three different kinds of soup a week, and two kinds of bredies.

"Most days it's soup, akni and breyani. Fridays we like to spice it up and give people noodle broths with different cold meats inside," he added.

The NPO's greatest challenge is that it does not have a vehicle to transport the huge pots of food to the open field where they serve people.

"It's been a real struggle having to collect the pots of food from different houses and transporting it to the field for the people. We hope one day a good Samaritan would be able to donate a bakkie to help us," he said.

Residents in Surrey Estate and Manenberg are benefiting from the hearty meals and line up early every day for their meals.

Most days the organisation feeds up to 250 people a day but as the end of the month draws closer, they feed up to 300 people, if not more. 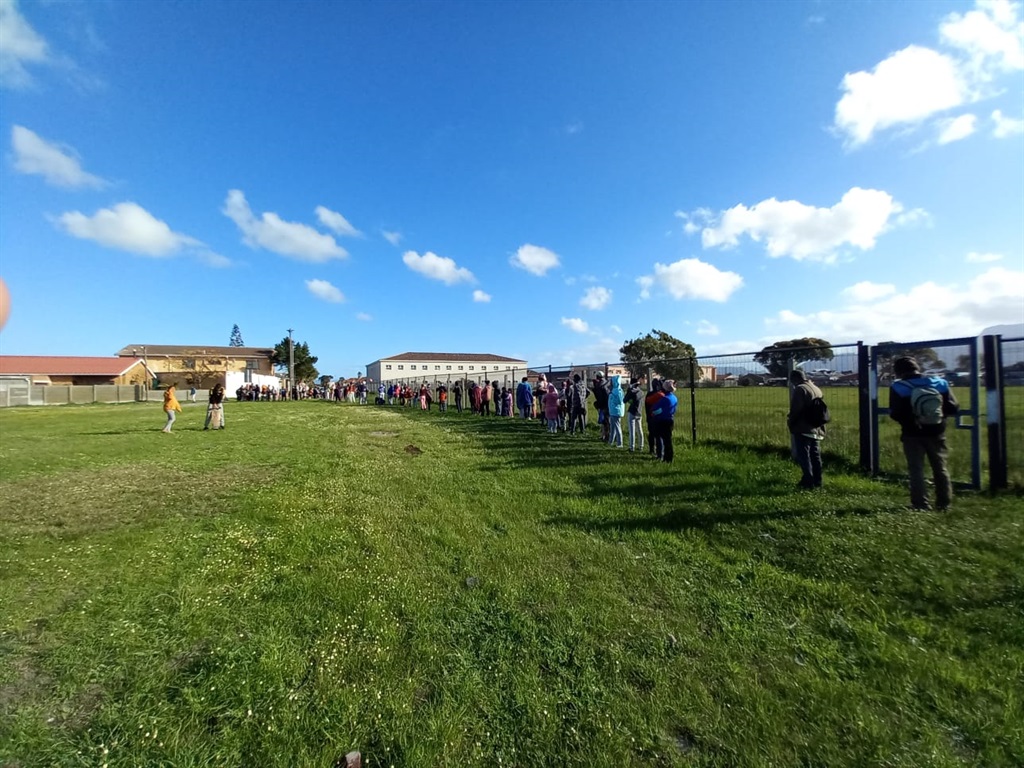 Rida added that he was ‘astonished’ at how many people had come out to the field when they heard free soup was being handed out.
Photo Supplied Rida Rylands, 22, said when he and his uncle Yaseen Regal who was a community leader saw the need for food in the area they decided they must ‘step up’ and assist their people.
Photo Supplied

"We started seeing that when it's close to payday, the number of people coming out to collect food increases. Residents [who] are not able to get by with their full pay cheques are also suffering, unable to put food on the table till month end," Rylands added.

Aunty Shakira Abrahams said she and her two grandchildren were regulars at the soup kitchen.

"I'm very grateful that Rida and his team have opened up their hearts to us less fortunate. Food is expensive and there are days where I can't give my grandkids any food, they enjoy taking a walk with me to the soup kitchen to get some nice food. It's an outing for them also," Abrahams said.

A 28-year-old Surrey Estate man who asked not to be named, said he put his pride in his pocket and walked every day to fetch his food.

"I used to feel shy when coming to fetch food, but then I saw people dressed in nice clothes are also standing in lines for food, so I thought to myself I'm just going to stop feeling embarrassed."

He added that he spoke to people while standing in line and was promised odd jobs here and there.

"I'm very grateful that I get to earn some money now when the people ask for my assistance," he said.

According to Rylands, he and his uncle were inseparable.

I know that he is smiling down on me and our NPO as we continue his legacy. He was a legend of a man. He was well-connected within the community. He taught me how to drive. We'd do everything together. I was his right-hand man. I miss him so much and know that he would've done miracles with this organisation.

The organisation recently also had a pp-up Covid-19 vaccination drive on the open field. About 98 people took up the opportunity to get vaccinated, Rylands said.

Ward councillor Aslam Cassiem said that together with the City of Cape Town's Mayco Member for Health, Dr Zahid Badroodien, they went door to door to tell people about the pop-up vaccination drive.

"We made a point of picking up seniors at their homes. However, the feeding kitchen's clients were the major recipients of the pop-up clinic," Cassiem added. “To make 110 litres of food daily is no joke, there are onions, carrots that need to be chopped up, bread must be made, the rice must be cooked, it’s a lot! So, to have volunteers offering up their home space and time to assist the NPO is fantastic,” Rylands said.
Photo Supplied

According to Cassiem, Rida has proven himself to be an "exemplary" young man.

"He has dedicated his time and efforts towards seeing to the needs of the less fortunate. While many young men his age are concerned about the latest cars, clothing and other material things, he is concerned about the well-being of those who do not have," he said.

Rylands said his dream was to expand the soup kitchen and assist the community in whatever way he can.

"The goal is to serve the community. It gives me great joy putting smiles on other people's faces."

Did you know you can listen to articles? Subscribe to News24 for access to this exciting feature and more.
We live in a world where facts and fiction get blurred
In times of uncertainty you need journalism you can trust. For only R75 per month, you have access to a world of in-depth analyses, investigative journalism, top opinions and a range of features. Journalism strengthens democracy. Invest in the future today.
Subscribe to News24
Next on News24
LIVE | Covid-19 in SA: 80 new deaths as cases hit 2 917 846