The couple's love story started on board a Cape Town bus.
Zaahid Appoles and Tharwat Armien

A Malibu Village couple ended off 2021 by taking their wedding photos on a Golden Arrow Bus, which they say will always have a special spot in their hearts.

After getting married in a small ceremony in Cape Town among their closest family and friends, Crystal and Marcel Meltor went to the place where they first met – a bus – to take wedding pictures.

Crystal, 31, and Marcel, 28, told News24 they met in 2016 on their 06:00 commute on board the Lwandle bus, which travels from Malibu Village to Somerset West, where they had both worked.

"I had taken a keen interest in Crystal when she started getting on the bus and sitting right in front. I used to sit at the back with my friends, but there was just something about her that I couldn't take my eyes off," said Marcel.

According to Crystal, one Friday morning when her friend didn't show up, she sat alone on her usual seat.

"He had then asked me to come and sit with them at the back and so I went to sit there. We then started talking, exchanged numbers and we started chatting," Marcel added.

The couple said they would often buy each other sweets on the bus. They would get all excited when they saw each other each morning on the bus, he said. "I really started liking him, and ever since we became close, I never sat in the front of the bus again," giggled Crystal.

They said their love story became so "noticeable" to the other passengers that they would often keep the seats open to make sure they sat together.

We dated for a good couple of years before I finally decided, 'No man, this is definitely the woman I want in my life forever'. I hatched a plan to propose to her unexpectedly.

He added that he had bought the ring in 2020 and kept it for six months because he didn't know how to propose.

"Without giving any hints away, I had roped her sister into my plan days before Christmas, asking her to wrap the ring box for me as I was certain I was going to ask the woman of my dreams to marry me," he said.

The couple then got engaged on Christmas Day in 2020. 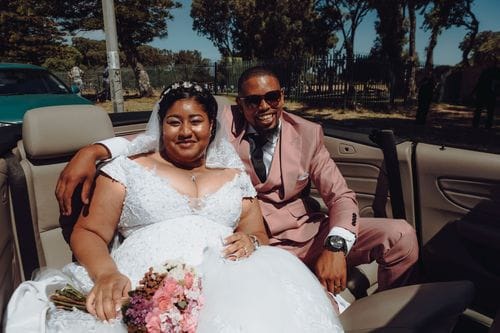 Crystal and Marcel Meltor told News24 they had met in 2016 on their 06:00 commute onboard the Lwandle bus which travels from Malibu Village to Somerset West where they both had worked.
Zaahid Appoles and Tharwat Armien

"It was a wonderful moment, definitely a day I will never forget," she said.

The couple had originally planned to get married early in 2021. However, tragedy struck when Crystal developed double pneumonia due to Covid-19.

"Oh, it was horrible. I really thought I was not going to make it. I spent close to two months at Tygerberg Hospital, in the intensive care unit (ICU), not knowing when I'd be able to go home. I was so dependent on the bed that eventually my legs started not doing so well because I was constantly in bed," she said. Crystal,31, and Marcel Meltor,28, told News24 they had met in 2016 on their 6 am commute onboard the Lwandle bus which travels from Malibu Village to Somerset West where they both had worked.
Zaahid Appoles and Tharwat Armien

Once she was discharged from hospital, the lovebirds started planning their wedding.

"I needed to marry her immediately. Seeing her in the ICU wasn't a good experience for me, and I just felt that we needed to get married soon," said Marcel.

The couple got married on 18 December 2021 at the New Apostolic Church in Westgate, Mitchells Plain, and went to the Westridge Gardens to take some pictures.

"We just had a crazy idea on that day that we should get onto a bus and take some pictures there, as that is where our love story began. And so we agreed and drove all the way to the Town Centre bus terminus," said Crystal.

Dressed in her wedding gown and Marcel in his suit, they walked up to the inspector to ask if they could take some wedding pictures on the bus, and she agreed.

"The driver at the time said he would change the name on the bus to 'Just Married' to make it look extra fancy," she said.

The couple said their wedding day turned out to be even more amazing than they had anticipated.

According to the couple, they did not have money for a big fancy reception, so they opted for a casual small get-together at home.

"Because of the pandemic we only had a few friends and family over, and we were happy with that," she said.

The happy couple said they no longer travel by bus. Marcel now drives her to work.

"I just recently got my licence. My hubby bought me a car for my birthday recently and now we are living our best life together," said Crystal.

According to the couple, they plan on expanding their family soon and want to go on honeymoon.

"We had a rough couple of years. Things weren't always easy, but we made it and we are just blessed to be able to spend our lives together," Marcel added.

"We often hear of life-long friendships being formed, and yes, sometimes people meet the love of their life on our buses. We wish Crystal and Marcel a life full of joy and good health. What a wonderful way to end 2021," she added.