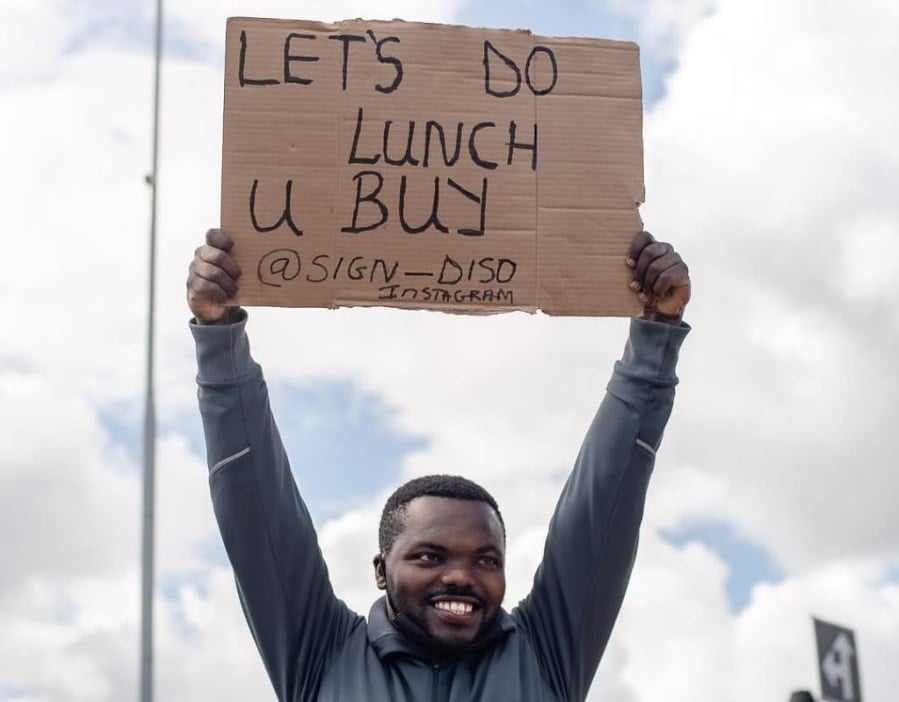 Using witty placards, a Cape Town dad brought some cheer to people at traffic lights in the vicinity of Table View.

Lusisindo Malgas and his signs are a familiar sight at the traffic lights along the R27, which passes through Dolphin Beach, Table View and Sunningdale.

Malgas's upbeat demeanour is also infectious, despite the fact that he lost his job as a packer and misses his children, who had to be sent to their grandmother in the Eastern Cape.

When he realised he would have to beg for money, he decided to add a sprinkle of humour to an otherwise bleak situation.

How will I survive?

"When I lost my job, I was like what am I going to do? How am I going to survive? All I know is how to make people laugh and how to talk to people. I had no choice but to work and put food on the table," he told BackaBuddy.

Many people sleep at one of the intersections he stands at, and some play chess to pass the time or walk through traffic to ask for spare change.

A BackaBuddy campaign to help Malgas, with a fundraising goal of R250 000 for a house in Khayelitsha, was set up with the help of Brendan Cottle who was moved by Malgas's story.

Cottle explained that Malgas would like to buy a house for himself and his children. He wants to move out of Du Noon because it is not safe there, and relocate to Khayelitsha.

He also hopes to transfer his placard wit to a T-shirt range.

Watch a Quest Films video of Malgas's story here or donate to the fund for his house here.

We live in a world where facts and fiction get blurred
In times of uncertainty you need journalism you can trust. For only R75 per month, you have access to a world of in-depth analyses, investigative journalism, top opinions and a range of features. Journalism strengthens democracy. Invest in the future today.
Subscribe to News24
Related Links
WATCH | SA man rocks world, and Keith Richards, with his guitar-shaped braai grids
WATCH | Musicians bring cheer to Cape Town’s frontline workers in concert on open-top bus
WATCH | Self-taught artist goes international with first solo exhibition in Belgium
Next on News24
WRAP | There are 712 412 coronavirus cases in SA and 18 891 deaths

3 players win R109k in the Daily Lotto prize
Full list of lottery results
Lockdown For
DAYS
HRS
MINS
Voting Booth
Who do you think is going to win the 2020 US election?
Please select an option Oops! Something went wrong, please try again later.
Biden is going to take it
46% - 7347 votes
It's four more years for Trump
54% - 8461 votes
Previous Results
Podcasts
PODCAST | POLITICS UNMUTED: Money for nothing, but how do we correct the corruption ship?