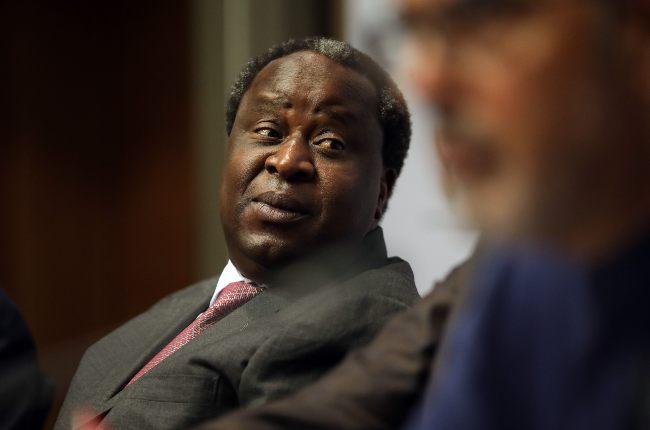 Finance Minister Tito Mboweni has decried "unfortunate" claims by businessman Tokyo Sexwale that billions were stolen from an education trust fund, and added that Sexwale was caught by a "common scam".

National Treasury and the South African Reserve Bank (SARB), in a statement late on Monday, said Sexwale wasn't the only one fooled.

National Treasury and the SARB have previously received correspondence from Mr Sexwale and many others that alleges that billions of rands have been stolen from a fund that has been referred to as the ‘White Spiritual Boy Trust’ and which was set up by a foreign donor.

"It is further alleged that there are trillions of dollars in the said fund and that, inter alia, a certain Mr Goodwin Erin Webb was its mandated representative in South Africa," the statement read.

"On investigation, the SARB can confirm that it had no record of the existence of the said fund and it had advised Mr Sexwale, in writing, that, given the SARB's experience and knowledge of this and other similar matters, it could only conclude that the alleged fund was a scam."

Mboweni tweeted on Monday: "Mr Tokyo Sexwale's statement about stolen money is untrue, sad and seems that he was a victim of the many scams abound. You cannot steal transmitted money from the central bank. How? His statement on television was unfortunate. Will reach out to him."

Mr Tokyo Sexwale’s statement about stolen money is untrue, sad and seems that he was a victim of the many scams abound. You cannot steal transmitted money from the central bank. How? His statement on television was unfortunate. Will reach out to him.

Sexwale dropped a surprise bombshell during an interview with JJ Tabane, on his eNCA show, Power to Truth, by claiming there was a "Heritage Fund", with billions of rands supposed to pay for free education for the needy as well as to contribute to South Africa's Covid-19 relief efforts.

Treasury and the Reserve Bank said they had over the years received "many such requests for, or promises, of billions (and now trillions) of rands or dollars, and from experience regard these as simply scams".

According to the statement:

Any claim that such funds are meant for deserving causes, such as Covid-19 relief, social grants or grants for free education, are simply empty promises, to secure the interest of the potential victim.

Sexwale wasn't the first prominent person acting on behalf of this Mr Webb or an unknown donor for such funds, the statement read.

Some requests date back to "many years before 2016".

"The SARB can confirm that all cross-border transactions are reported to the SARB by commercial banks, who are appointed as Authorised Dealers in foreign exchange transactions. The SARB has concluded that there is no evidence to support the existence of such funds," the statement read.

The statement said if Sexwale believed otherwise, the onus was on him and his unknown sponsor "to provide independent written proof of the existence and/or transfer of such funds, as well as certified copies of actual identification and citizenship of such 'donors', in line with the normal FICA-type anti-money laundering requirements. Allegations of theft of non-existent funds have no validity."

I am part of two people, who are in charge of the Heritage Fund that belongs to a very powerful family out there in the world. This fund is here in South Africa already, it comes through the SA Reserve Bank. I'm part of two people who are mandate holders.

He said both former president Jacob Zuma as well as his successor, President Cyril Ramaphosa, knew about this fund, as well as Mboweni and his predecessor, whom he didn't name.

The fund was one of the reasons why Zuma announced free tertiary education for indigent students ahead of the ANC's national elective conference at Nasrec in 2017. He said the alleged theft was reported with the police two weeks ago, and they were investigating.

It has not been clarified what the Heritage Fund was that Sexwale was referring to, and why it took so long for knowledge of this fund to be made public.

Sexwale has previously made a bid for the ANC presidency, ahead of the ANC's conference in 2007, when he ended up throwing his weight behind Zuma - and, in 2012, when he ran for deputy president, he lost against Ramaphosa, with about a tenth of the votes that Ramaphosa got.

The ANC's next elective conference is set to take place next year.