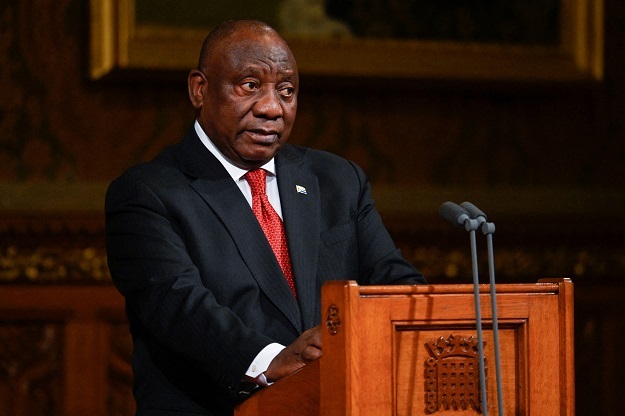 President Cyril Ramaphosa delivers a speech to Members of the Houses of Parliament and guests, at the Palace of Westminster.
TOBY MELVILLE / POOL / AFP

President Cyril Ramaphosa delivered an address during a state visit to the UK. His speech focused on trade partnerships SA has with the UK, as well as climate matters.

It is a great privilege for me to address this august gathering on behalf of the government and the people of South Africa.

The ties between our countries are old and enduring.

The manifestations of our relationship abound.

If you have ever visited our Parliament buildings in Cape Town, you have may have seen in the gardens a statue of Queen Victoria, the revered ancestor of His Majesty King Charles III.

And not far from where we are gathered today, on the other side of Parliament Square, is a statue of Nelson Rolihlahla Mandela, the father of our nation.

The presence of the statues of these two great historical figures at the seats of our respective democracies makes a powerful statement.

It makes a powerful statement about the duration, the meaning and the complexity of the relationship between our two peoples.

These statues are part of the story of a relationship that was founded in colonialism and conflict, dispossession and degradation.

And yet, these statues are also part of a story of redemption. This is a story of relationship transformed; a relationship of solidarity and compassion, of a shared desire for equality, human rights and the fulfilment of the potential of all.

Over the last three decades, this has been a story of trade, investment, tourism, sport, education, art, science and innovation.

We therefore see this visit as an opportunity to celebrate our modern relationship, as equal partners, working together for the prosperity and security of our people.

We are grateful that the principles that are represented and safeguarded within these hallowed halls – democracy, liberty, humanity and equality – are now at the centre of our strong and dynamic bilateral relationship.

These principles not only guide our interaction with each other.

These principles also inform our shared perspectives on the difficulties confronting humanity and the opportunities for progress and development.

Our world today is beset by conflict and instability, by poverty and inequality.

We face the existential threat of a planet that is warming at a rate far faster than can sustainably be endured.

Collective action, within the appropriate global governance systems, is now more important than ever before.

A strong partnership between South Africa and the United Kingdom could make a significant contribution to multilateralism and the achievement of consensus on critical global issues.

It is essential that we reform the international institutions on which we rely in times of crisis and need.

We look to the United Kingdom to raise its voice in favour of more representative and more inclusive international bodies, including the United Nations Security Council and global financial institutions. Cyril Ramaphosa along with King Charles III and Queen Consort Camilla look at a chess set, which was a gift in 1996 from anti-apartheid icon Nelson Mandela to late Prince Philip.
AFP Dan Kitwood / POOL / AFP

These bodies need to be better equipped to respond to the needs of countries with developing economies.

Our membership of the Commonwealth provides us with a body that can play an important role in crafting relevant and innovative responses.

The Covid-19 pandemic exposed many of the fault lines within the global order.

It laid bare the huge disparities in wealth, power, technology and health capacity.

It demonstrated both the capabilities and the limitations of institutions of global governance, finance and development.

Therefore, as we work to rebuild in the wake of the pandemic, it is essential that we address the inequality within and between nations.

Unless we act with urgency and purpose to close the gap between wealthy and poor, hardship and suffering will only deepen.

Instability, conflict and terror will increase.

We need to attend to the deficiencies in access to education, health care, safe water, sustainable energy and economic opportunity if we hope to end the poverty that is handed down from one generation to the next.

Nowhere is the need to tackle inequality more important than in our response to climate change.

Those countries that carry the least responsibility for global warming are most vulnerable to its effects.

They do not have the resources needed to adapt to drought, floods and rising sea levels.

As the members of this Parliament, you have been vital and engaged participants in the evolution of the relationship between our two countries. You have provided support and encouragement.https://t.co/oiItGHOzT0

And as they seek to grow, industrialise and diversify their economies, their energy needs will increase and the space they have to reduce emissions will narrow.

This places a responsibility on industrialised nations to contribute substantial resources to low- and middle-income countries to fund their climate actions.This is not charity.

It is compensation for the harm done – and the harm yet to be done – to people in developing economies as a consequence of the industrialisation of wealthy countries.

And because a global reduction in emissions benefits all countries and all people, it is also a necessary investment in the future of humanity.

We greatly appreciate the commitment of the United Kingdom to the implementation of a just energy transition in South Africa.

It demonstrates a clear recognition by the UK government of the importance of supporting transitions to low-carbon economies in a manner that does not disadvantage affected workers, communities or industries.

We have called on the United Kingdom and the other partners to ensure that a substantial part of the funding takes the form of grants and highly concessional loans.

We are pleased that the final outcomes of COP27 hold out the promise of concerted action to address climate change.

It was President Nelson Mandela who espoused the vision of a global community of nations that strives by all means available to improve the human condition.

Given our history, given our shared values, given the durability of our relationship, I firmly believe that South Africa and the United Kingdom should work together for the realisation of such a global community.

Three decades ago, the British people joined hands with the people of South Africa – and with millions more around the world – to free Mandela and to end apartheid.

Now, let us rekindle the moral purpose of the global fight against apartheid to confront the discrimination, inequality and injustice that divides humanity and that stifles the progress of all.

This state visit is an opportunity to reinvigorate the ties of commerce, trade and investment between our two countries.

The United Kingdom is the largest foreign investor in South Africa and the country’s fifth largest export destination.

Over the last two decades, the United Kingdom has been South Africa’s largest source of tourist visitors outside of Africa. Cyril Ramaphosa pictured during a state visit to the UK.
GCIS

There are few countries that have the depth of experience and knowledge of the South African economy than Britain.

British companies need to use this advantage to greater effect, to seek out the opportunities in our country for investment and for trade.

The cooperation in science and innovation between the two countries is significant, with rich potential for further expansion.

Since 2015, the United Kingdom has invested more than R350 million in Newton Fund partnerships with South Africa, reciprocated by a South African investment of R100 million.

The activities of the Newton Fund include a programme to train the next generation of radio astronomers in Sub-Saharan Africa, marine food security in the Indian Ocean, bio-medical research and innovation, and support for entrepreneurs in the informal economy.

Over 800 South Africans have benefited from the Chevening Scholarship programme, and there are currently over 130 South African PhD candidates studying in the United Kingdom.

We are convinced that there is great scope to expand these areas of cooperation.

As we strive to rebuild our economy in the wake of the pandemic and the era of state capture, as we work to create employment and economic opportunities for the 11 million South Africans who are without work, we are opening up new frontiers of growth and production.

We are undertaking far-reaching economic reforms to make our economy more competitive and more efficient, to reduce the cost of doing business and to encourage new entrants into several industries.

As we undertake the most significant restructuring of our energy market in almost a century to address severe power shortages, there are great opportunities for investment, innovation and partnership.

By pursuing these and other avenues for cooperation, I believe that we will define the relationship between South Africa and the United Kingdom in new and exciting ways.

By exploring the full extent of our common interests and capabilities, I am certain that we will add another chapter to our long and rich history.

As the members of this Parliament, you have been vital and engaged participants in the evolution of the relationship between our two countries.

You have provided support and encouragement.

You have stood by us during our darkest hours and you have celebrated our achievements.

We thank you for your friendship, solidarity and partnership.

Please be assured of the sincere and enduring friendship of South Africa and its people.