Gauteng closes three quarantine sites, only one to remain open until Jan 2021 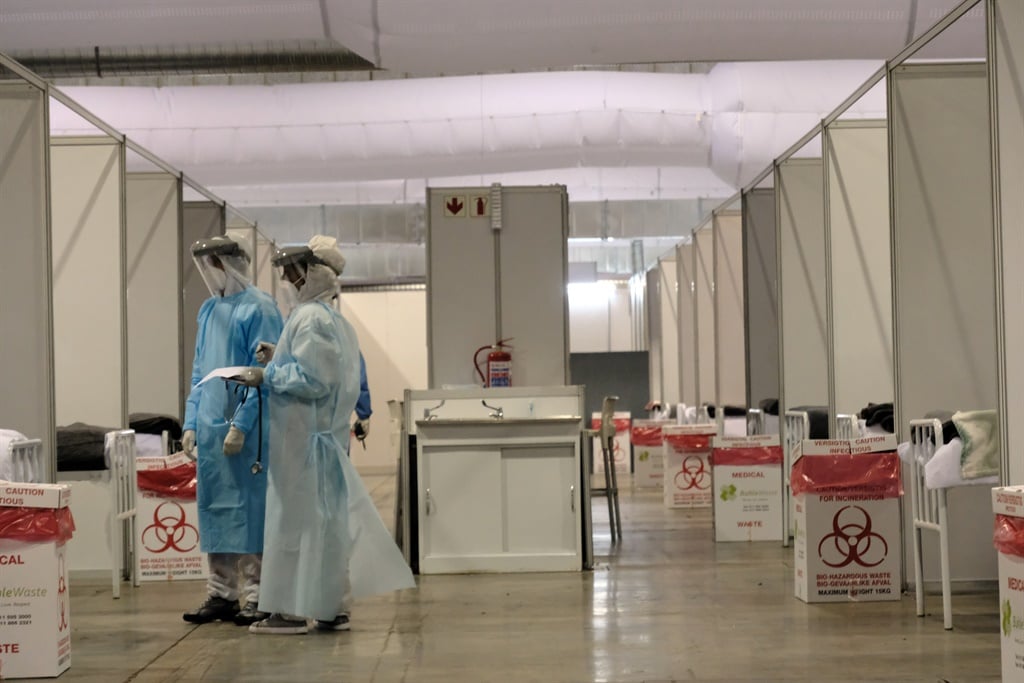 Medical officials attend to Covid-19 patients at the Nasrec quarantine and isolation site in Johanneburg. (Photo by Gallo Images/Dino Lloyd)

The Nasrec field hospital that was contracted by the Gauteng provincial government to be used for isolation and quarantine of Covid-19 positive patients in the province, will remain open until January 2021.

In a statement issued on Tuesday, the province's health department said two of its quarantine and isolation sites - Telkom in Olifantsfontein and Transnet in Esselen Park - were already closed in August, while the third site, Eskom in Midrand, was expected to close by the end of November.

This was due to low demand for services in these facilities, and the need to make use of the venues by the owners, said the department.

It also added the threat of Covid-19 infections had not been "completely reduced" in the province to justify Nasrec being closed at this stage.

"The projected peak was not realised by end of September 2020 as per initial projections, the threat of the second wave of infections still remains, according to the World Health Organisation," acting Health MEC Jacob Mamabolo said.

"The province is cautious on its decisions to start reducing the number of beds outside hospital environments without consideration of underlying threats of a second wave which is evidently being realised in other countries."

The department also said it would be "monitoring" the festive season period closely for Covid-19 infections.

It said 21 patients were treated at the Nasrec facility in September, and five had been admitted so far in October.

And by end of August, the department had recorded the following accumulative expenditure on the facility:

"The department is projecting to spend less than what was projected based on full occupation of all beds procured. Should the bed occupation numbers remain consistent with the current rate, our projections for both facilities (combined costs) is at the region of between R157 029 963 and R255 896 761 for all costs, inclusive of assets, to be recovered," Mamabolo said.

- Compiled by Jeanette Chabalala
We live in a world where facts and fiction get blurred
In times of uncertainty you need journalism you can trust. For 14 free days, you can have access to a world of in-depth analyses, investigative journalism, top opinions and a range of features. Journalism strengthens democracy. Invest in the future today. Thereafter you will be billed R75 per month. You can cancel anytime and if you cancel within 14 days you won't be billed.
Subscribe to News24
Related Links
Cyril Ramaphosa | Presidential Employment Stimulus: Putting more jobs on the table
Next on News24
LIVE | Covid-19 in SA: 3 801 new cases

Here are the Daily Lotto numbers
Full list of lottery results
Voting Booth
Have you and your family been counted in Census 2022?
Please select an option Oops! Something went wrong, please try again later.
Yes
47% - 3581 votes
No
53% - 4003 votes
Previous Results
Podcasts
PODCAST | The Story: How one incident at Stellenbosch University sheds light on deeper issues