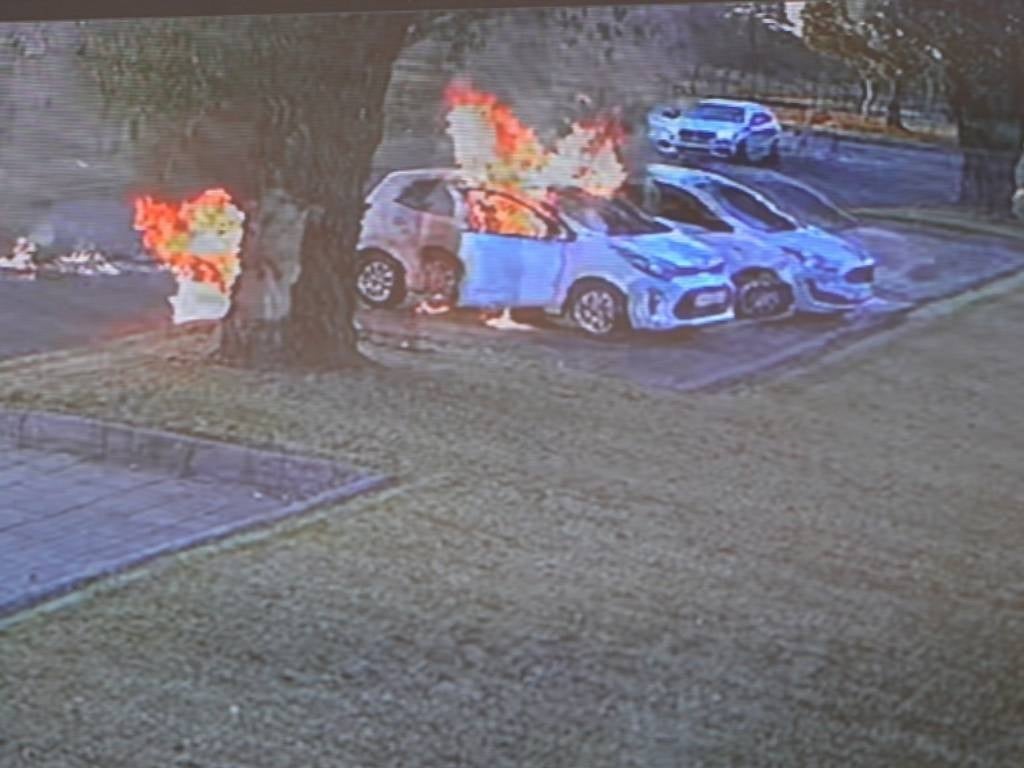 A woman has been attacked in her car.
Supplied

A Gauteng mother was rushed to hospital after her car was set alight during an attack outside a Benoni school on Monday by a man believed to be her boyfriend, according to police.

The woman had just dropped off her 4-year-old child at the pre-school when the man approached her car and smashed the driver's window.

The woman and a passenger fled from the car toward the pre-school.

In video footage seen by News24, the man is seen returning to his car, grabbing something inside it before heading to the victim's vehicle. The man is then seen motioning towards the vehicle with the item in his hand.

In an apparent attempt to stop the man, the woman heads back to her car. Moments later the car bursts into flames and the woman, who was now standing near her vehicle, catches alight.

The man then gets into the burning vehicle before jumping out.

The owner of the pre-school, who did not want to be named, said the mother was admitted to hospital where she is reportedly in the ICU. She said the minor child was in the care of a loved one.

It's unclear what happened to the man following the incident, though the pre-school owner believed he was also taken to hospital.

Gauteng police said they were investigating what appeared to be a domestic violence-related assault at a school in Benoni.

She said police were investigating an attempted murder case.

Kweza said the woman is 27 years old, while her boyfriend is 40.

"The suspect, 40, was also injured during the incident and was taken to hospital where he is under police guard. An additional charge of malicious damage to property will be added after the woman's car was burnt beyond [repair]. The woman, who was with a friend, both sustained burn injuries. They were rushed to hospital as well. At this stage, the motive is under investigation," said Kweza.

ER24 - in a statement on Monday afternoon - confirmed that two women and a man were hospitalised this afternoon when a man allegedly poured petrol over himself and a light motor vehicle, setting it alight.

The paramedics arrived at the scene at 06:48 and found the provincial fire services already there. A light motor vehicle was alight in the parking area.

We live in a world where facts and fiction get blurred
In times of uncertainty you need journalism you can trust. For only R75 per month, you have access to a world of in-depth analyses, investigative journalism, top opinions and a range of features. Journalism strengthens democracy. Invest in the future today.
Subscribe to News24
Next on News24
LIVE | Covid-19 in SA: 55 new deaths as cases hit 2 921 114

Lucky Thursday for 1 Daily Lotto player
Full list of lottery results
Lockdown For
DAYS
HRS
MINS
Voting Booth
Have you decided who you are voting for on 1 November?
Please select an option Oops! Something went wrong, please try again later.
Yes, and it is the same party I voted for previously
52% - 1144 votes
Yes, but my vote has changed to a new party
29% - 636 votes
No, I am still undecided
20% - 436 votes
Previous Results
Podcasts
PODCAST | Ballot Box: An end to 'vat en sit' coalitions and how they will be regulated in the future