A woman is evacuated from a burning apartment building in Kyiv.
Aris Messinis / AFP

The government has urged South Africans "not to take sides" in Russia's invasion of Ukraine.

"As [the] government of South Africa, we urge all South Africans not to take sides on the conflicts between Russia and Ukraine, as this could go against our principles," said Deputy International Relations and Cooperation Minister Candith Mashego-Dlamini during a debate in the National Assembly on Tuesday.

DA leader John Steenhuisen called for the debate on an urgent matter of national public importance.

Although the topic was "The impact of the Russian Federation's invasion of Ukraine on the South African economy", little was said about the economy.

While there was agreement the war's impact on South Africa's economy would be dire, an ideological chasm among South African parties were exposed.

READ | War or peace? Ramaphosa must come clean on his Russian 'friends'

ANC speakers referred to Putin's "military operation" as "the conflict".

Introducing the debate, Steenhuisen said the world was facing its biggest threat of war in 80 years. 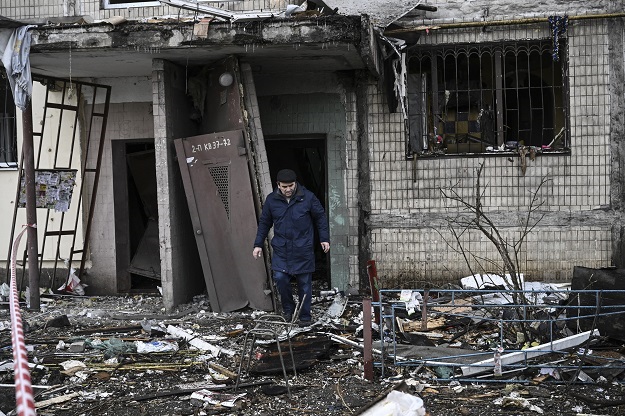 A man walks away from a destroyed apartment block following shelling in the northwestern Obolon district of Kyiv.
AFP Aris Messinis / AFP

"A tyrannical aggressor with a finger on the nuclear button has invaded a far less powerful neighbour and is shelling civilian targets as we speak," he added.

"Over two million Ukrainians have become overnight refugees as their homes and hospitals are bombed to rubble. President Vladimir Putin is acting with the impunity of a despot with nothing to lose. Let's be clear, there is no moral ambiguity here."

Steenhuisen said regardless of the region's history and decades of tension between east and west, Russia had committed an unjustifiable act of war.

Every world leader with a moral conscience has condemned it and called on Russia to withdraw. But not South Africa's President Ramaphosa. Under a shameful veneer of 'neutrality', the ANC government has effectively pledged its tacit support for Putin's imperial march to restore his lost empire.

He continued: "It has picked the wrong side of history, and it has dragged 60 million South Africans along with it."

He added the ANC was supporting Putin's regime out of self-interest.

"Also consider that a businessman close to Putin tried to run a disinformation campaign for the ANC in the 2019 election, and that the ANC's biggest donor last year was a Putin-aligned oligarch," Steenhuisen said.

He added there was no such thing as a neutral position and quoted the late Archbishop Desmond Tutu, who said: "If you are neutral in situations of injustice, you have chosen the side of the oppressor."

Although she was present at the sitting, International Relations and Cooperation Minister Naledi Pandor did not participate in the debate.

Pandor issued a statement calling on Russia to withdraw its troops, only for Ramaphosa to contradict her the next day. She later backtracked in a speech to the UN.

"As a nation birthed through negotiation, South Africa is always appreciative of the potential dialogue has in averting a crisis and de-escalating conflict.

"In line with our strong commitment to the peaceful resolution of conflict, South Africa urges all parties to devote increased efforts to diplomacy and to find a solution that will help avert further escalation," she said.

"The door of diplomacy should never be closed even as conflict has broken out."

"Yes, I have studied in Russia," she said, adding she had to study there in the cold because she was persecuted in South Africa.

GOOD's Brett Herron and the ACDP's Kenneth Meshoe criticised Ramaphosa because he spoke telephonically with Putin, but not his Ukrainian counterpart, Volodymyr Zelensky.

Zulu said Ramaphosa would speak with Zelensky when he availed himself.

EFF deputy leader Floyd Shivambu said there was "nothing wrong" with Russia "preventing the spread of NATO". A man holds his dead cat in a blanket as he stands outside a destroyed apartment building in the northwestern Obolon district of Kyiv.
AFP Aris Messinis / AFP

He added the USSR and "Russia in particular" helped South Africa in the struggle against apartheid. Shivambu did not mention Ukraine was part of the USSR. He said Russia was a "true friend" of South Africa and should never be abandoned.

Shivambu was also singing from the Putin hymn sheet, referring to the war as "military operations".

READ | Pope leads crowds in prayer for peace in Ukraine

"There is absolutely nothing wrong with the military operations in Ukraine," he said. "We stand as the EFF to reaffirm our relationship with Russia should never be compromised."

Also having a go at NATO was NFP MP Munzoor Shaik-Emam, who said the "root cause" of the conflict is "the West" and the US.

"Russia is saying stay away from my borders and from me. Currently, there is a threat to the Russian republic," he said.

"We are forgetting about the rights of people being violated by the Ukrainians themselves."

He was cheered by some ANC MPs.

IFP MP Mkhuleko Hlengwa said South Africa was not a good friend to Russia, since true friends told you when you were wrong.

Hlengwa added the invasion was "unequivocally unnecessary" and was causing a humanitarian crisis.

"We must call out Russia on its wrongness. Neutrality in a war advances the cause of the aggressor, in this case, Russia."

FF Plus leader Pieter Groenewald also picked up on South Africa's so-called friendship with Russia, and said the ANC should ask themselves how Russia saw the party.

"Do they see you as a friend or as a useful idiot?" he added.

ANC MP Supra Mahumapelo railed against his newly coined ideology of "Steenhuinism", which according to him advances the onslaught of Western imperialism and involved "saying and doing things totally ahistorical".

Never miss a story. Choose from our range of newsletters to get the news you want delivered straight to your inbox.
We live in a world where facts and fiction get blurred
In times of uncertainty you need journalism you can trust. For 14 free days, you can have access to a world of in-depth analyses, investigative journalism, top opinions and a range of features. Journalism strengthens democracy. Invest in the future today. Thereafter you will be billed R75 per month. You can cancel anytime and if you cancel within 14 days you won't be billed.
Subscribe to News24
Next on News24
BREAKING NEWS LIVE | Limpopo cops arrest 5 alleged farm attackers, recover guns and stolen cash