Half of South Africa's sewage treatment works are failing 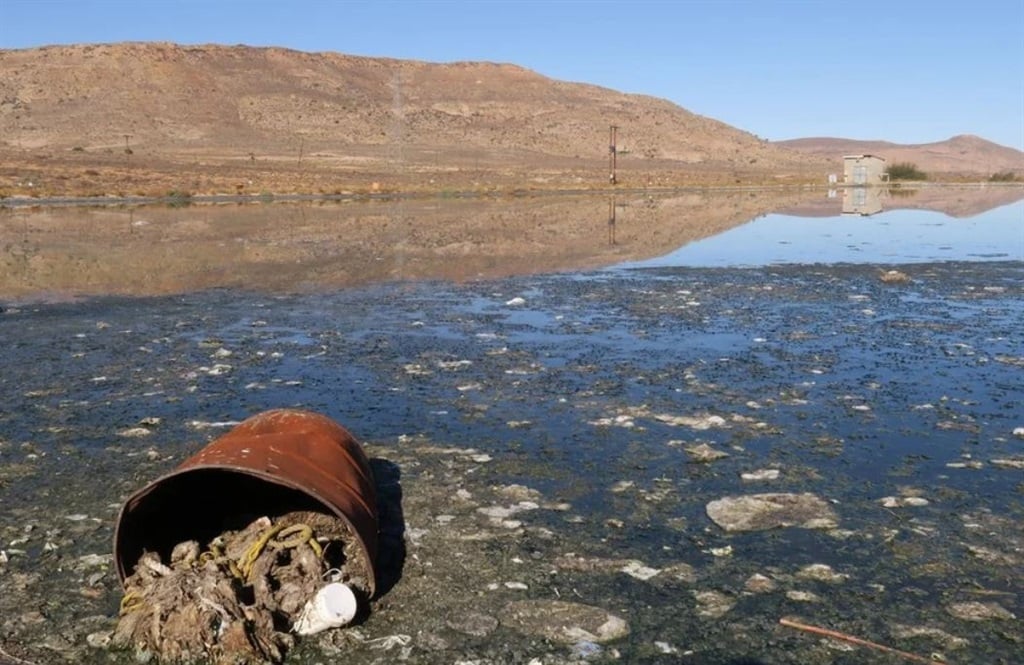 This is the failing sewage works in Springbok, Northern Cape, one of 334 in the country which obtained a Green Drop score of 30% or less.
Photo: Steve Kretzmann

After a nine-year hiatus, the long-awaited Green Drop report paints a bleak picture: Half of wastewater treatment works in South Africa fail to treat sewage properly and, in many cases, fail to treat it at all.

Anthony Turton, of the Centre for Environmental Management at the University of the Free State, says this represents "a tsunami of human waste inundating our rivers and dams, without respite, for more than a decade".

The number of critical treatment works listed in the last report in 2013 was 248.

The latest Green Drop report, released on 30 March 2022, reveals wastewater compliance has plummeted in the intervening years. Of 850 municipal wastewater treatment works, 334 (39%) are in a critical state, obtaining a score of 30% or less.

"This decline is at both the treatment and sewer collection levels," states the report.

The average Green Drop score across all provinces was 50%, indicating that about half our raw sewage and industrial waste is not being treated to standards which are already inadequate, according to scientists in the fields of chemistry and epidemiology. The average score in 2013 was 61%.

But analysis of the Department of Water and Sanitation's (DWS) own data shows that even some of the few wastewater treatment works, which received scores of 90% or more, are polluting the environment.

Key to understanding this is the acronym NMR, which stands for No Monitoring Required. It is not reflected in the national Green Drop report, but is found in the individual provincial reports.

Green Drop scores for wastewater treatment works and the sewerage infrastructure servicing them are obtained using an equation in which weightings are given to five key performance areas: capacity management; environmental management; financial management; technical management; and effluent and sludge compliance - which, at 30%, has the highest weighting.

The report notes: "The effluent quality must comply to 90% (in total) with the authorised limits for the respective categories."

The minimum compliance levels are set out in the wastewater treatment works' authorisation, issued by the DWS.

No Monitoring Required means a wastewater treatment works is exempt, according to its authorisation, from having to comply with all or some of these effluent quality indicators. All graphics produced for this article by Yuxi Wang of the Center for Collaborative Investigative Journalism.

The Green Point and Hout Bay wastewater treatment works in the City of Cape Town are both Green Drop award winners. They are also marine outfalls. The only treatment the sewage receives before being pumped into the ocean is maceration through a 3mm sieve to remove solids and grit. The Green Point waste contains pharmaceutical and light industrial wastewater.

Neither of these facilities are required to monitor or reduce the faecal bacteria in the wastewater before releasing millions of litres of sewage into the ocean per day.

Following research conducted by Edda Weimann in 2013, that found Clifton beach contaminated with faecal bacteria, media reports and a public outcry over the marine outfalls led to the City commissioning its own report.

Conducted by the Council for Scientific and Industrial Research (CSIR) in 2017, it found "no immediate ecological disaster" was imminent as a result of effluent discharge from Cape Town's marine outfalls.

But the report stated that there was "indirect evidence from faecal indicator bacteria counts in seawater samples collected at many sites along the Cape Town shoreline over an extended period that effluent is possibly, even if infrequently, reaching the shoreline".

The CSIR report noted that, although sewage outfalls are common in coastal cities around the world, "the world cannot use the marine environment as a waste receptacle in perpetuity and opportunities for improved and economically and environmentally feasible wastewater treatment, and the feasibility of using alternate strategies for disposing of wastewater to the marine environment should be investigated by the City of Cape Town (and other municipalities)".

The City has stated it has no plans to divert wastewater disposed via the marine outfalls to wastewater treatment works.

Research in 2017, led by Professor Leslie Petrik of the University of the Western Cape Chemistry Department, to determine whether sewage pollution was affecting seawater and marine organisms, found E. coli counts near the outfalls that were thousands of times above the general limit for treated wastewater effluent.

Besides bacteria, such as E. coli, and the nitrates and phosphates which are supposed to be removed during wastewater treatment, Petrik and her colleagues said the sewage contains chemicals of emerging concern which current wastewater treatment methods, when applied, do not remove.

There are thousands of these synthetic chemicals used in pharmaceuticals, personal hygiene products, pesticides and industrial applications. These are stable compounds which do not break down in the environment, but accumulate.

Petrik and her colleagues tested for 15 of them in the area surrounding the Green Point marine outfall. They included diclofenac (an anti-inflammatory drug commonly known as Voltaren), sulfamethoxazole (an antibiotic used for a variety of infections), phenytoin (a medication used to prevent seizures), carbamazepine (a medication for epilepsy and bi-polar disorder), lamivudine (used to treat HIV and Hepatitis B), and paracetamol. These were all found to be present in wet sea sand, and accumulating in marine organisms, such as seaweed, sea urchins, starfish and limpets.

Further studies found some of these chemical compounds accumulating in fish in False Bay, on the Indian Ocean side of the city. False Bay receives effluent either directly or indirectly from seven wastewater treatment plants, none of which received Green Drop certification awards.

The largest plant, the Cape Flats wastewater treatment plant, which releases effluent into False Bay, scored 0% for microbiological compliance in 2020 and 2021 from the DWS. For chemical compliance, it scored an average of 37%. Yet, inexplicably, it achieved a Green Drop score of 85%. All graphics produced for this article by Yuxi Wang of the Center for Collaborative Investigative Journalism.

Further clouding the picture is the Green Drop report's introduction of the contender awards. These are given to wastewater treatment works which fulfil all criteria, but are disqualified from receiving a 90% score (the minimum for a certification award) because they fail to treat the effluent to minimum standards.

Contender status was awarded to 30 wastewater treatment works in the country, giving the impression their environmental impact is acceptable. However, eight of them failed dismally when it came to effluent quality, cumulatively releasing billions of litres of partially treated sewage into their catchments. Releasing approximately million litres of effluent into the Diep River daily, Potsdam wastewater treatment works was given an 89% score in the Green Drop report, yet it only met minimum standards for effluent quality just 9% of the time during the year under review.

One of only six large estuaries on South Africa's west coast, the Diep River estuary in Milnerton, Cape Town, experienced a fish die-off in March.

Estuaries such as these are critically important as fish nurseries, says marine biologist and founder and director of Anchor Environmental Consultants, Dr Barry Clark.

They are breeding grounds for a large number of species, which are important for inshore fisheries, and are a source of livelihood for small scale commercial and subsistence fishers, as well as recreational fishers who contribute to local economies. The Green Point marine outfall pipe, situated at Mouille Point, through which more than 20-million litres of raw sewage is pumped 1.7km out to sea every day.
GroundUp Photo: Steve Kretzmann

"On the west coast, there are only five or six reasonably large estuaries, and the Diep River is one of them," said Clark, with their scarcity making them "disproportionately important to fisheries".

With Potsdam wastewater treatment works releasing huge volumes of wastewater into the Diep River estuary, it is in an "extremely poor state of health at the moment".

He said the quality of wastewater flowing into the estuary has "deteriorated severely" over the last decade.

"Diep River estuary is hugely important and it's a tragedy it's effectively lost to society," said Clark.

The City of Cape Town is making efforts to upgrade Potsdam wastewater treatment works and rehabilitate the Diep River estuary, but is falling short of meeting a directive meted out by the provincial Environmental Management Inspectorate in 2020.

Another of Cape Town's high scoring contender wastewater treatment works is Athlone, which releases effluent into the Black River, a major river running through the central city area. Athlone wastewater treatment works scored just 15% on average for microbiological compliance across 2020 and 2021 – the period of the latest Green Drop audit. Its chemical compliance levels were at 54% for the period.

Flowing through an industrial area, it is also polluted by high levels of heavy metals, as University of the Cape Town Masters student Lucy Gilbert found in 2015.

Yet the Black River remains a source of food and income for some Capetonians. Abibat Lamidi buys catfish caught in the Black River to make a traditional pepper stew for her customers. She says the fish from the river smell like petrol, but the strong spices the dish calls for disguise this.
GroundUp Photo: Peter Luhanga

Abibat Lamidi runs a restaurant in the Maitland semi-industrial area, near the Black River. Lamidi says she buys catfish caught in the Black River by informal fishers, paying between R30 to R50 a fish. She uses it as a base for a traditional pepper soup sought by her Nigerian customers.

But she says the taste of the Black River catfish is very different from catfish in Nigeria. "This catfish smells like petrol."

But she disguises the taste with the strong spices that make up the dish. 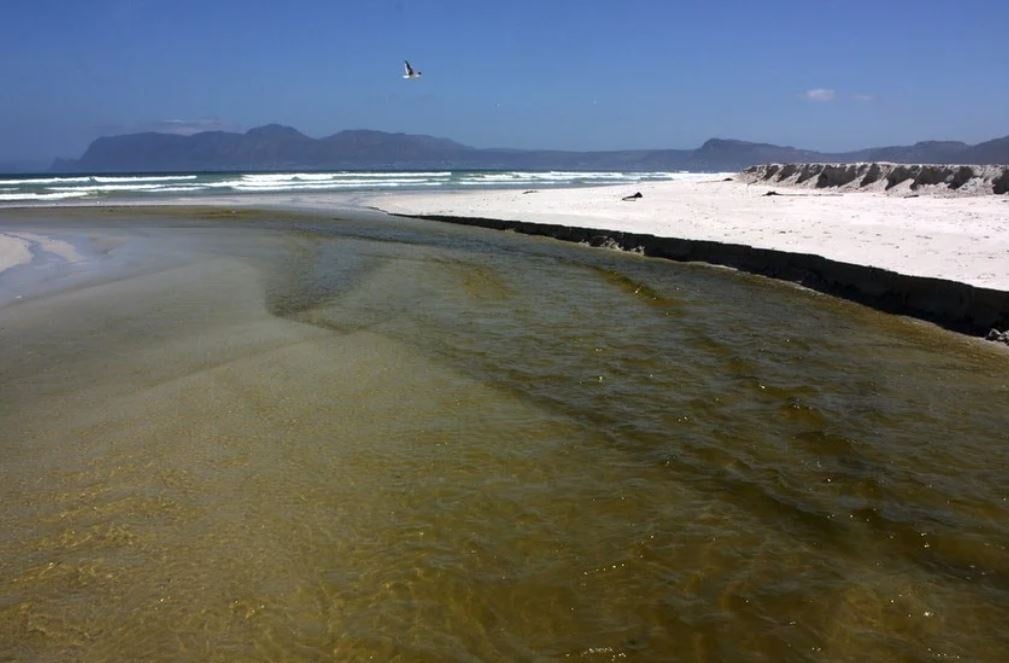 Polluted effluent flows from the Cape Flats Wastewater Treatment Works into False Bay at Strandfontein. According to Department of Water and Sanitation data, the Cape Flats treatment works scored 0% for microbiological compliance in 2020 and 2021. For chemical compliance, it complied with requirements just 37% of the time on average over the two years.
GroundUp Photo: Steve Kretzmann

Given studies revealing bioaccumulation of chemical compounds up the food chain in the diluted seawaters along Cape Town's coast, the long-term effect of consuming fish from the Black River, where pollutants are more concentrated, is of concern.

This investigation was produced in collaboration with the Centre for Collaborative Investigative Journalism and OpenUp, with the support of the Open Society Foundation.