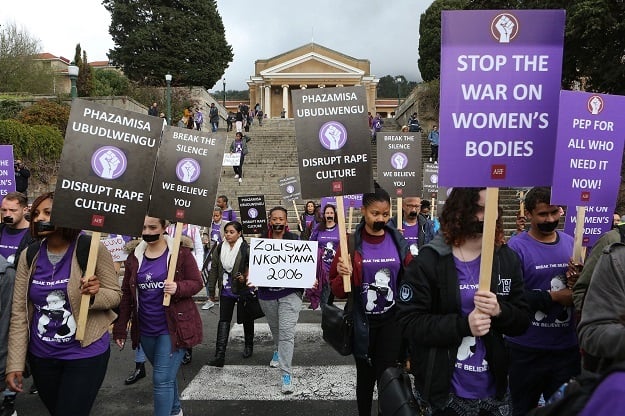 Guidelines on what constitutes sexual and gender-based violence and how to tackle it have been released by Higher Health, in collaboration with the Department of Higher Education.

These guidelines are in response to the Post-School Education and Training's GBV policy framework that Higher Education Minister Blade Nzimande launched in 2020.

All higher education institutions were expected to implement them.

To curb the GBV pandemic, Higher Health prepared the policy framework in 2018 and presented it to the department.

The framework urged institutions to put mechanisms in place to raise awareness, prevent GBV and ensure victims were supported and assisted.

Presenting the guidelines on Friday during a webinar, Higher Health's Erica Emdon said they had set basic standards that everyone on campus should abide by and adhere to.

She added they were much like the Bill of Rights of the Constitution.

The guidelines outline what constitutes GBV, how cases should be investigated and the disciplinary processes and consequences.

A code of ethics had also been prepared and was ready to be signed by all campus community members, indicating a commitment to behaving in a certain way, Emdon said.

The guidelines state anyone is a victim, regardless of their sex or gender. It covers part-time and full-time students, all staff and consultants.

Behaviour on- and off-campus - be it at school fields, conferences, and trips were - also covered in the guidelines.

"Both current and former students and staff are covered, visiting staff, students and partner organisations that are members of the campus community are all going to be covered by these implementation guidelines," she added.

Verbal, non-verbal, cyber and physical abuse, sexual abuse, rape and grooming are among the detailed behaviours outlined in the guidelines.

They also outline what constitutes consent, stating it could not be given if a person was not fully conscious or under threat of force, or intimidation or false presences.

They added both parties involved in sexual activity were responsible for ascertaining free consent without coercion.

Consent for one instance does not mean consent for others, and past consent doesn't mean future consent. Silence does not imply consent, and consent must be explicit.

The guidelines also stipulated poor safeguarding practices at institutions should be eradicated.

More support should be offered, including not allowing abusive or concerning practices to go unreported.

She added some of the poor practices that needed to be eradicated were inadequate lighting and security on campuses as well placing students in compromising and uncomfortable situations, for example, giving them accommodation far from campus.

Emdon said a campus-based office must be distinct and separate, recognising that GBV required specialised consistent and informed responses.

She added:
It [the office] must have executive seniority support and be at the highest possible level in the institution. In other words, a principal of the institution and the senate board of the institution must take this office very seriously. And that office or person is tasked with implementing these guidelines, protocols and minimum standards to ensure safety and proper responses on campus.

The guidelines also outline the reporting procedure of GBV that should be taken when anyone is required to report a case of violence. The person reported to should immediately refer it to the responsible office.

There is no threshold on reports, and no matter how minor a case is, it should be reported.

A complainant can also go to the police while also following the set of responsible office protocols.

"Complainants may choose not to pursue action in which the responsible office can, particularly if it sees a risk."

To a certain point, complainants can remain anonymous and may withdraw, choose a formal or informal process if they want.

A formal hearing is expected to have three members, including a gender specialist, and witnesses should be called in.

Rape and sexual assaults must be reported to the allocated office. Even those rape cases occurring after hours should also be reported to trained people who know how to respond.

According to the guidelines, off-campus accommodations must be in areas that did not expose students to rape. They also compel cases to be reported to the offices, which must implement the guidelines immediately and provide psychological support.