Housing lobby groups and activists have accused the City of Cape Town of failing deliver on a promise to develop 11 parcels of public land into affordable housing.

The DA-led administration has come under fire in the past for its delayed approach in developing affordable housing for low-income families in well-located areas close to the CBD.

Its director, Mandisa Shandu, said the City's housing backlog was growing every year and currently sat at 300 000 people.

"The number is growing which is caused due to the impact of Covid-19. Affordability has become critical in the right to housing."

Ndifuna Ukwazi's Bhule Booi said the City had promised to release the land.

"We were excited about this because it showed government's commitment around reversing spatial injustice. Four years later, there has been very slow progress around these sites. The City was extended an invitation for them to address us but they opted to send a statement. 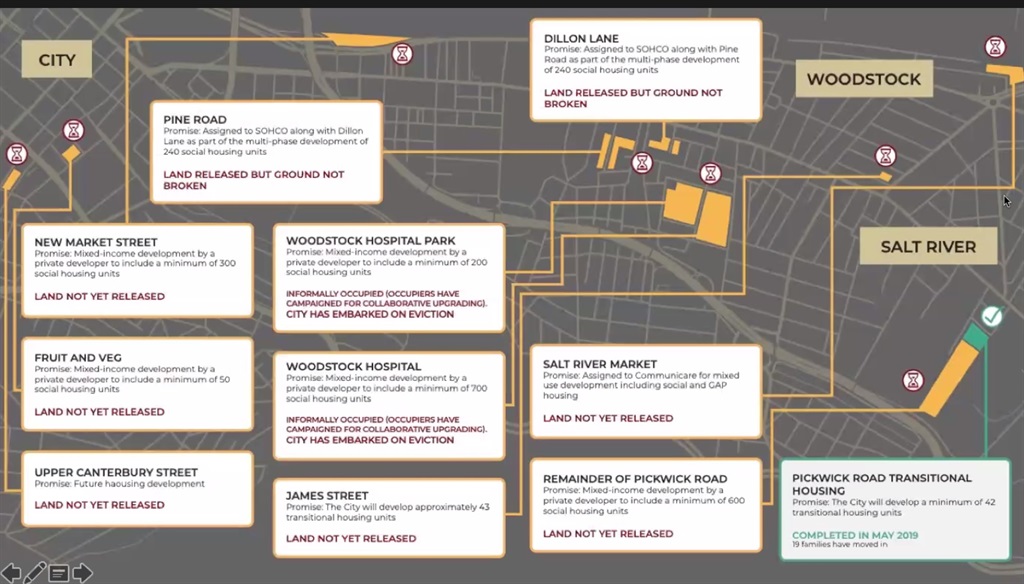 Reclaim the City's Woodstock leader and resident of the illegally occupied Old Woodstock Hosptital Bevil Lucas said he believed there was a lack of political will.

"Woodstock is a popular working class area filled with factory workers and hotel workers. And as gentrification started we had to find a response when we started this campaign for decent houses for all … The housing crisis has gotten worse and the leadership has compounded this crisis. The 11 sites have come as a result of mounting pressure from the working class."

Four years ago, the City promised to develop 11 parcels of land it identified for social housing. The sites were in Salt River and Woodstock.

However, since the announcement was made, only the Pickwick Transitional Housing development has been completed.

• Projects undergoing land use management processes to be made available for social housing include New Market (+/- 300); Pickwick (+/- 400); and Woodstock Hospital precinct (+/-700).

• Woodstock Hospital, one of the City’s largest priority projects in central Cape Town, has favorable conditions for development but has been delayed after activists occupied the defunct hospital. The City has since sought to unlock the known potential of the site for social housing, while following the correct legal processes/routes.

• Potential projects at early feasibility stage in the inner-city pipeline include Fruit and Veg (150 units) among other opportunities;

• Western Cape Government-driven projects, supported by the City, include the Conradie development in the inner city feeder suburb of Pinelands, Founders Garden, Foreshore Precinct and Helen Bowden Nurses Home in Green Point (which is currently occupied by housing activists). All have significant potential for social housing unit yields.

"In fact, there is increasingly less grant funding to go around, with R118 million cut from the City's urban settlements development grant last year alone. The national zeitgeist is fundamentally moving away from the state as a primary provider of housing. This is being hastened by the drying up of grant funding."

He said there were approximately 2 000 social housing units already in the pipeline for central Cape Town.