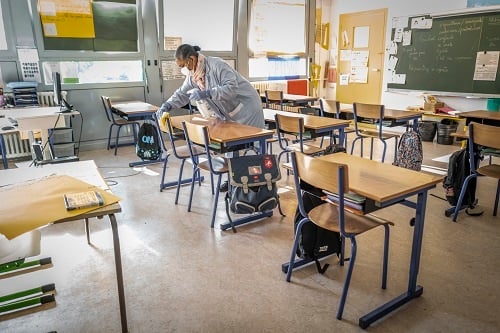 The Independent Schools Association of Southern Africa (Isasa) says it is pleased that the Department of Basic Education has given schools the green light to apply to phase in the return of more pupils in other grades.

The department amended its Covid-19 regulations on the reopening of schools on Monday 1 June.

According to the gazetted regulations, schools are allowed to deviate from the phased-in return for pupils in different grades, provided that they comply with minimum health, safety and social distancing measures and requirements.

Pupils in grades 7 and 12 were expected to return from 1 June, followed by pupils in other grades on future dates.

Isasa executive director Lebogang Montjane said the association had asked the department to consider allowing schools, particularly private schools, to phase in pupils' return differently because of their nature and size.

Although the department allowed such schools to apply for the process to their provincial departments, Montjane said the association hoped schools would "notify" them, rather than file applications.

"Our concern is that the administrative backlog [of applications] would be quite significant, but we are really gratified to at least see that the [provincial departments] are doing what they need to do," he told News24.

A circular from the Gauteng education department's Head of Department (HOD), Edward Mosuwe, to all district directors, independent school principals and circuit managers, stated that schools applying for a deviation should do so to the HOD. News24 has seen the circular and Montjane confirmed that the association and schools received it.

"All applications for deviations must be sent to this email: GDEindependentschools@gauteng.gov.za. This is the only email you can use for this purpose.

"All decisions regarding the phasing in of the reopening of schools must put the best interests of learners first, especially the safety and protection of their lives," the communiqué read.

Montjane said the Gauteng department had already started issuing approvals on Friday and that the association would monitor progress.

In the communiqué, the  Gauteng department also stated that, while it acknowledged that schools could apply for a deviation, it recommended that principals consider phasing in grades according to Gazette Notice 302.

Montjane said: "We have further written to the Department of Education, saying we are hoping that they consider that independent schools notify rather than apply. But as we see how fast and efficiently the Gauteng provincial department has dealt with things, that may fall away."

Among the schools that applied is The Ridge School in Johannesburg, which is an Isasa member.

In a letter to parents, which News24 has also seen, the preparatory school for boys in Westcliff said Grade 7 pupils had settled in and that it would focus on "the rest of the boys".

Headmaster Richard Stanley stated that the school was compliant and had sent deviation applications to the department.

"The strong advice of our school lawyers is for us not to ignore this new [department] ruling by simply going ahead with bringing our other grades back next week, instead, to formally request the support of Isasa to champion our cause (and that of other independent schools) by themselves, as our umbrella body, requesting permission from the various provincial education departments for all compliant independent schools to be given permission by Isasa to open when they choose to," the school said in the letter.

We live in a world where facts and fiction get blurred
In times of uncertainty you need journalism you can trust. For only R75 per month, you have access to a world of in-depth analyses, investigative journalism, top opinions and a range of features. Journalism strengthens democracy. Invest in the future today.
Subscribe to News24
Related Links
Private schools ready to reopen
Lockdown Level 3: Some independent schools open doors to Grade 7 and 12 pupils
Independent schools meet with DBE over exemptions as they prepare to reopen from 1 June
Next on News24
LIVE | Covid-19 in SA: Death toll rises by 93 as cases hit 1 832 479