Here are the most prevalent accomplices which conspire with Covid-19 to kill, according to Western Cape data: diabetes and hypertension.

Since the global pandemic arrived on South African shores, health authorities have warned that certain "comorbidities" are most-often prevalent.

Now, data compiled by the Western Cape government on deaths has broken down which comorbidities were prevalent by age, and has also given more insight into the impact of HIV and TB.

Last week, President Cyril Ramaphosa was briefed on the most life-threatening, as he visited the embattled province which leads the country by cases.

The top five are diabetes, hypertension, HIV, obesity and asthma/chronic respiratory disease. This was part of an exhaustive 68-page presentation to the first citizen by the Western Cape government on Friday.

But it was not just single illnesses to which Covid-19-infected succumbed: A full 65% of the patients cited had more than one comorbidity. And two out of five had three or more.

Below is a pie chart indicating the number of deaths that included a comorbidity at the time of the data collection: Only 12% - or one in eight people who died – had no apparent comorbidity, with some at risk due to age or other factors.

Despite the high infection rate of the virus, the vast majority of people survive.

The national health department says South Africa's death rate is still only 2% of all positive cases. The vast majority of people recover.

The Western Cape government says 90% of people who contract the virus will not need any hospitalisation, and will recover from the virus within two weeks.

In the two youngest age groups listed – 20-39 and 40-49 – of those who died, hypertension and HIV topped the danger list as accompanying comorbidities.

Then, from 50 and older, hypertension was joined by diabetes as the top co-killer.

Below is a graph representing the comorbidity breakdown in those who died by age groups older than 20: 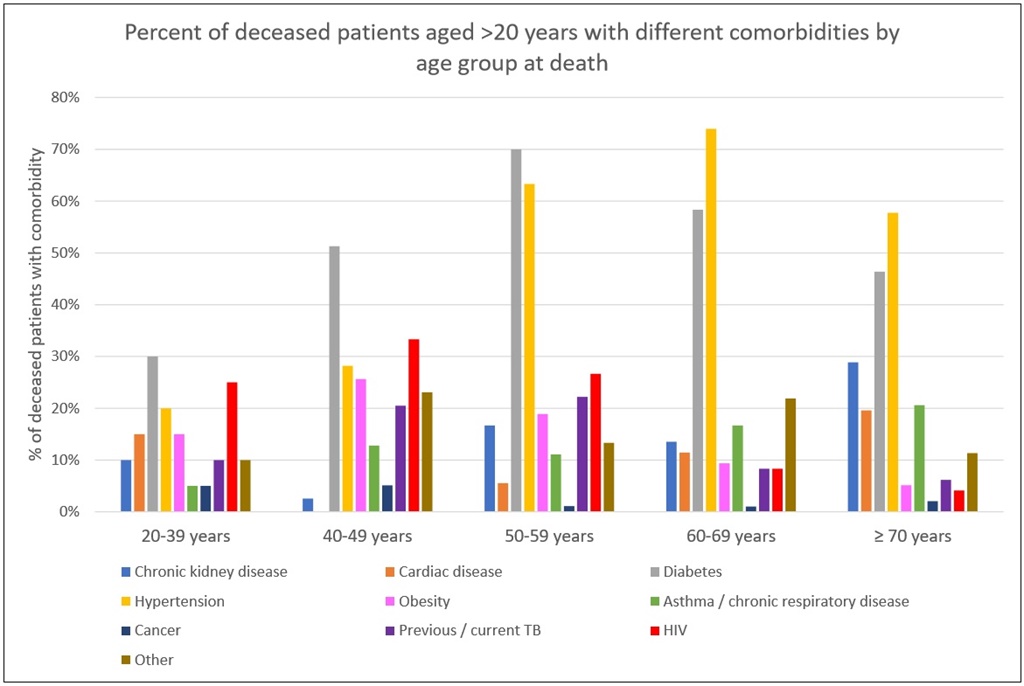 When Ramaphosa was presented with these statistics on Friday, there had been a total of 2 226 hospital admissions in the Western Cape. Of these:

- The average stay in general hospital wards had been five days;

- The average stay in critical care units had been 8-10 days;

- 11% had been admitted to intensive care units (ICUs);

It's not only patients taking the toll, but healthcare workers - a total of 6.3% of cases in the Western Cape.

The provincial experts told Ramaphosa that 1 662 healthcare workers had been infected so far. Of all patients hospitalised, 8.3% were healthcare workers. This South African figure was higher than China (3.8%), but lower than the USA (11%), Spain (19%) and British Columbia, Canada (21%).

By Friday, 15 healthcare workers had died.

This represented 0.9% of all healthcare workers infected.

The Western Cape health department presented the president with a complex matrix, which explained "Standard Operating Procedure for Hospital Staff Members with exposure to Covid-19 individuals".

This calculated their potential exposure, and detailed the steps all staff had to follow, post-exposure. The province had also adopted a "Buddy Screening System", by which healthcare workers assessed peers.

The Western Cape retains a total of around two-thirds of all cases.

We live in a world where facts and fiction get blurred
In times of uncertainty you need journalism you can trust. For 14 free days, you can have access to a world of in-depth analyses, investigative journalism, top opinions and a range of features. Journalism strengthens democracy. Invest in the future today. Thereafter you will be billed R75 per month. You can cancel anytime and if you cancel within 14 days you won't be billed.
Subscribe to News24
Related Links
First 10 patients admitted to CTICC 'hospital of hope' after four-week conversion
First 20 US-donated ventilators installed at Baragwanath hospital in Soweto
WATCH | 'We are losing colleagues': Tygerberg nurses protest for better working conditions
Next on News24
LIVE | Covid-19 in SA: 8 179 new cases